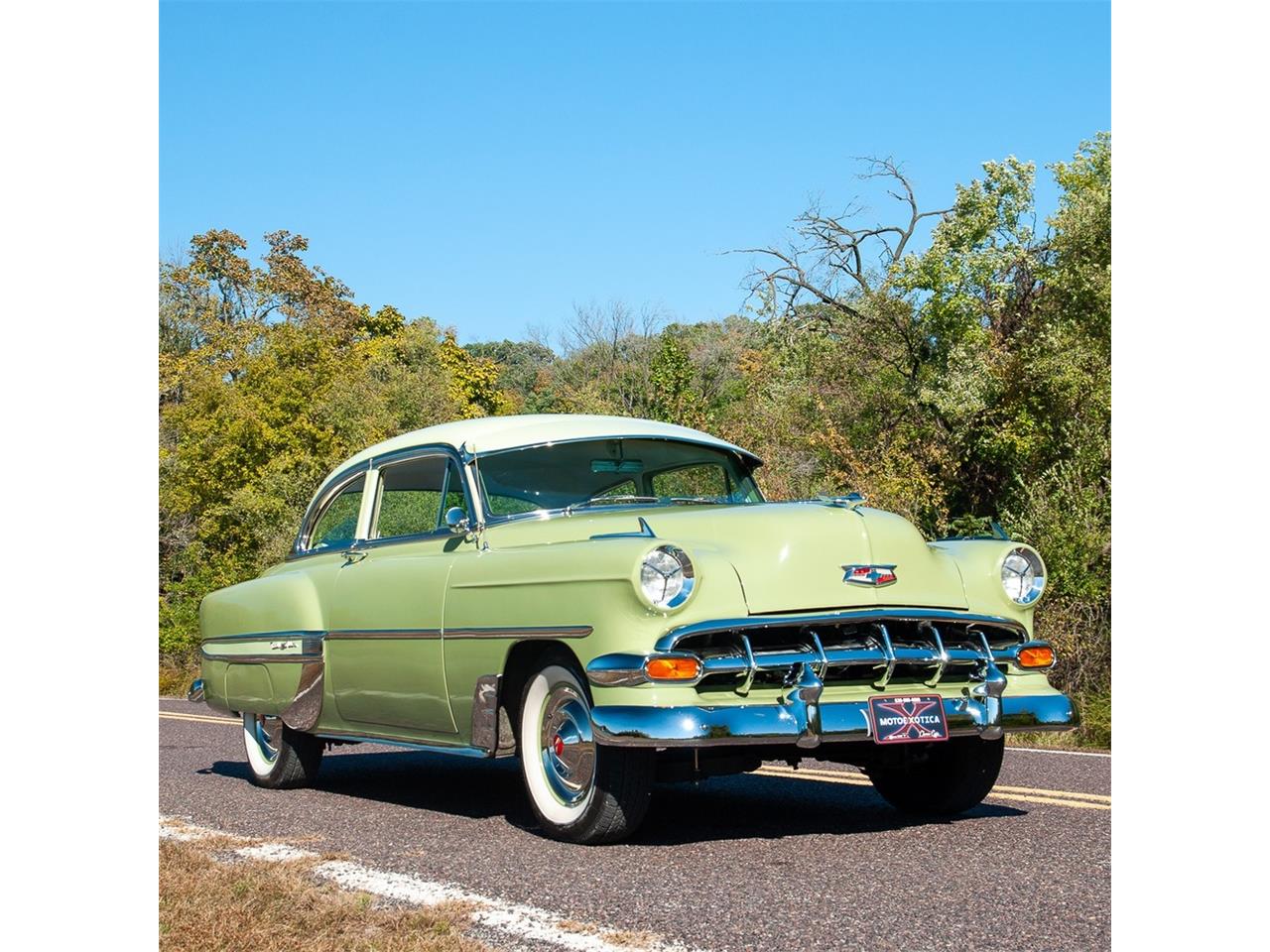 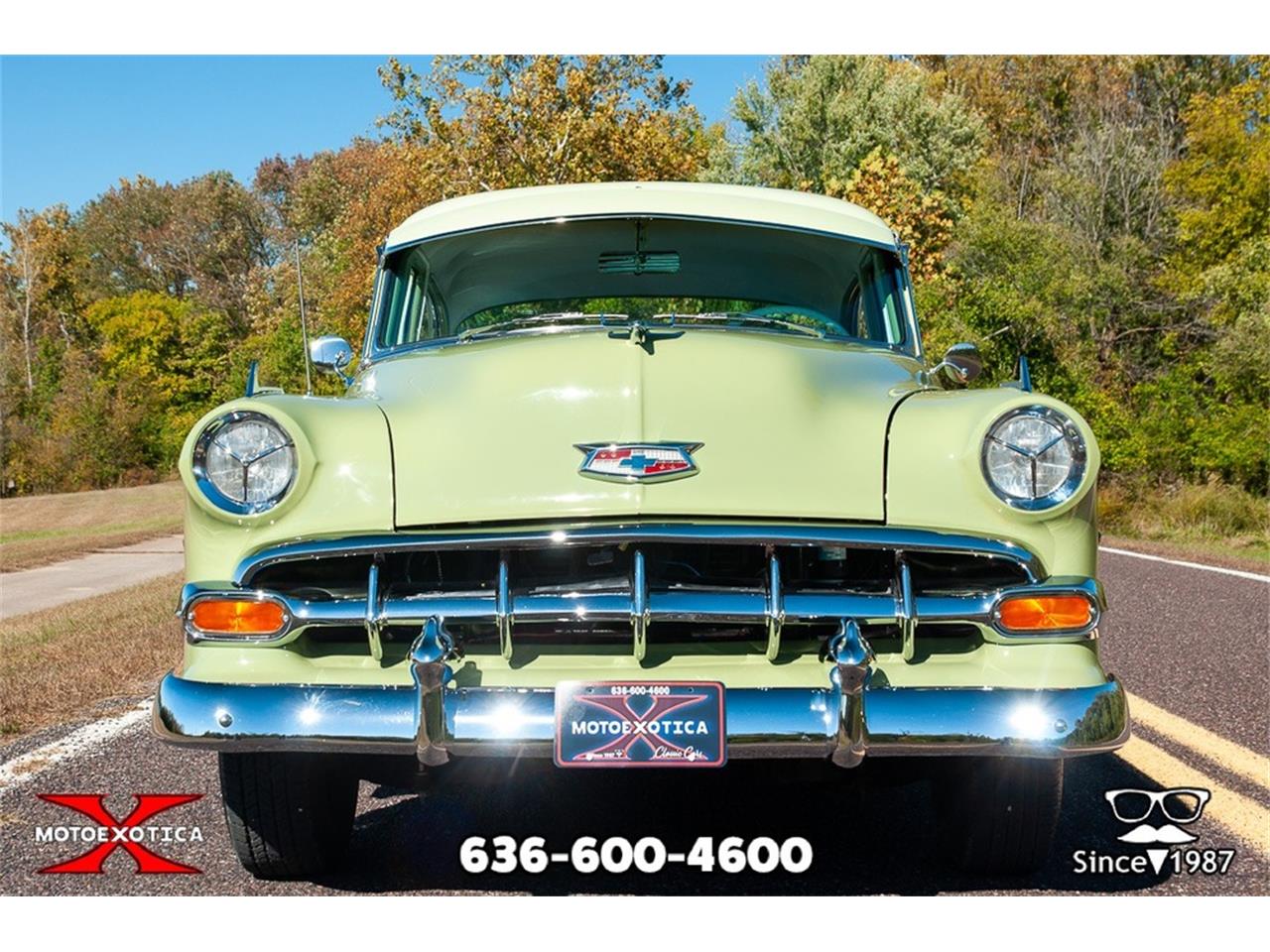 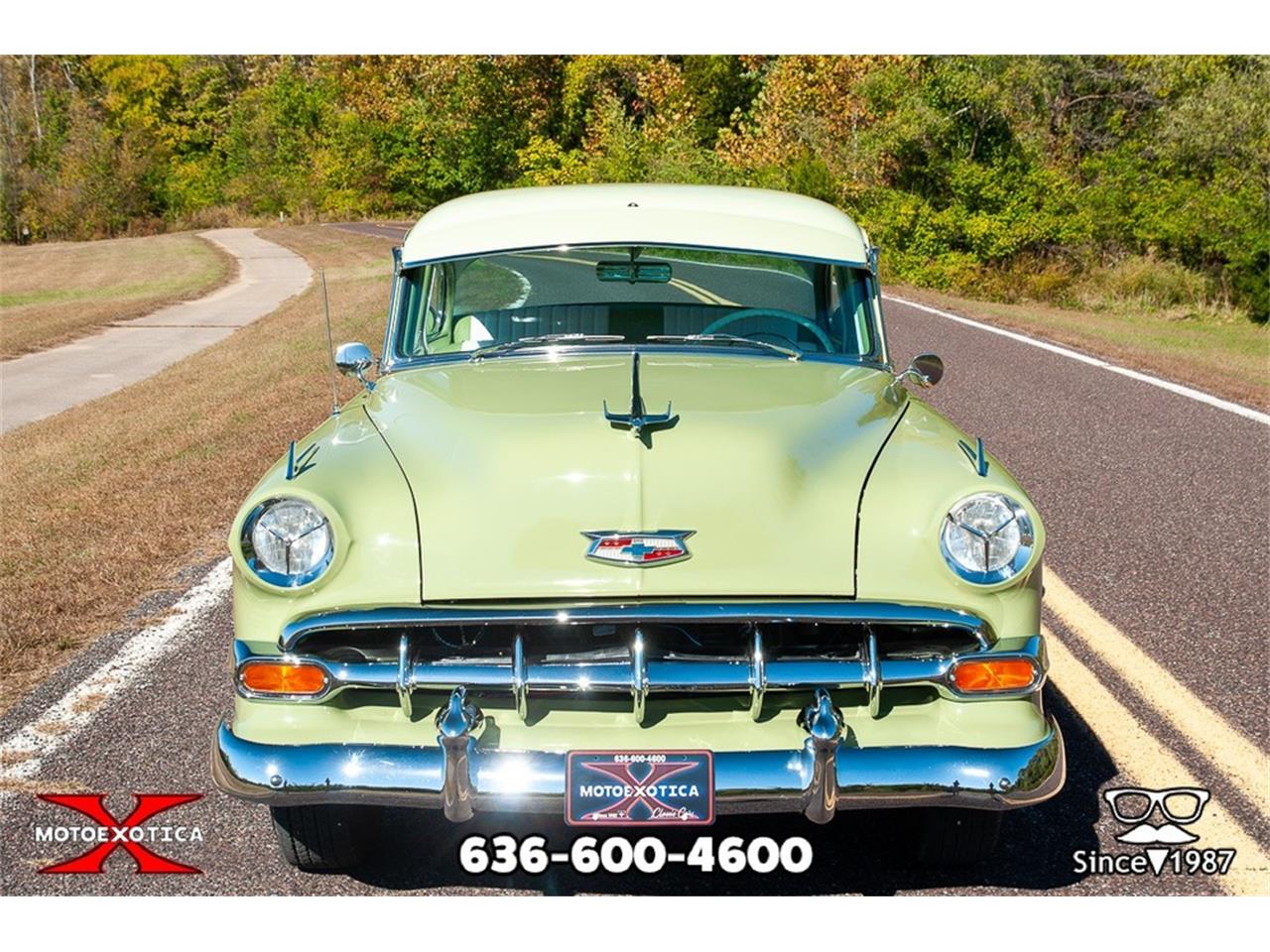 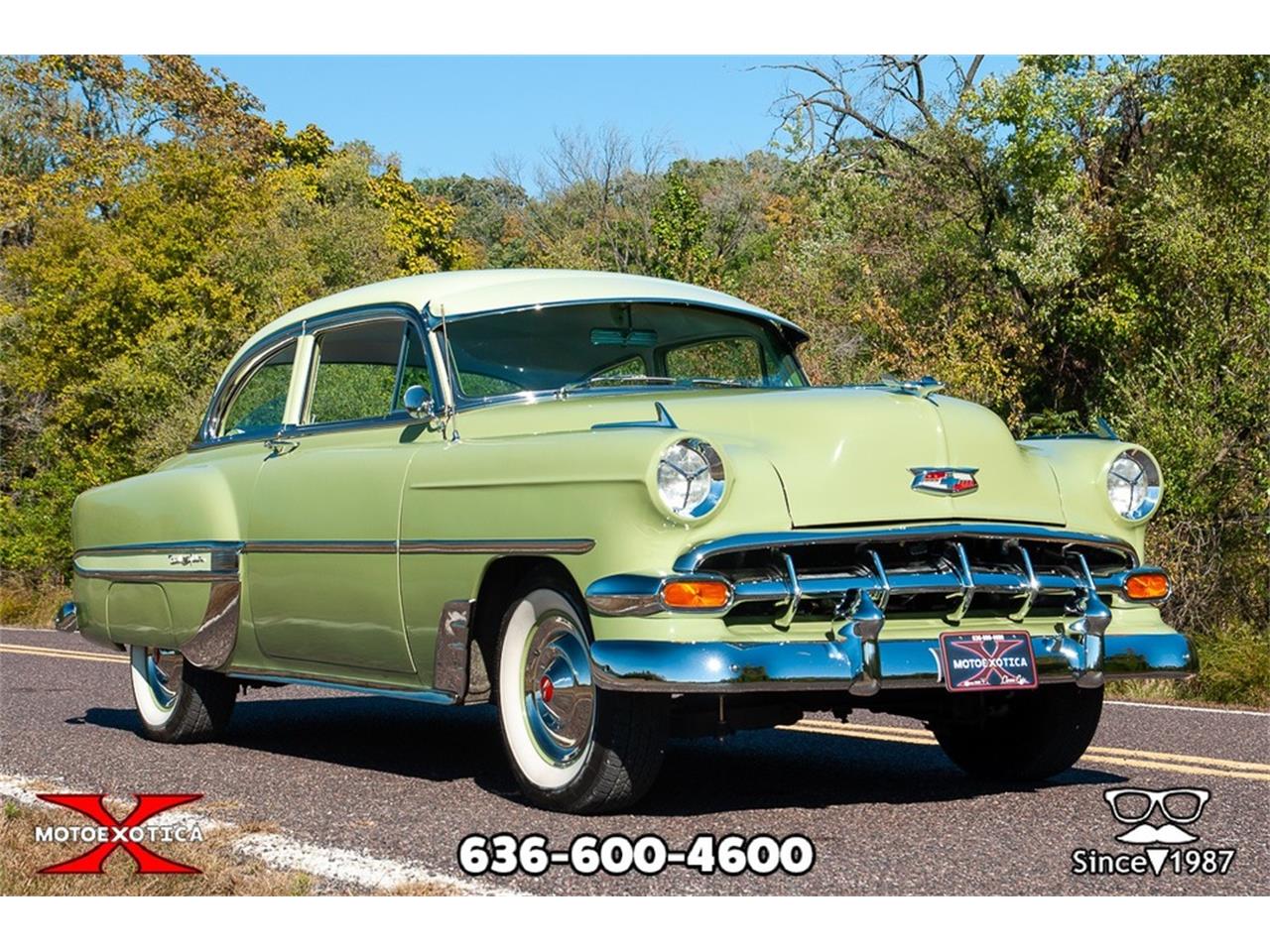 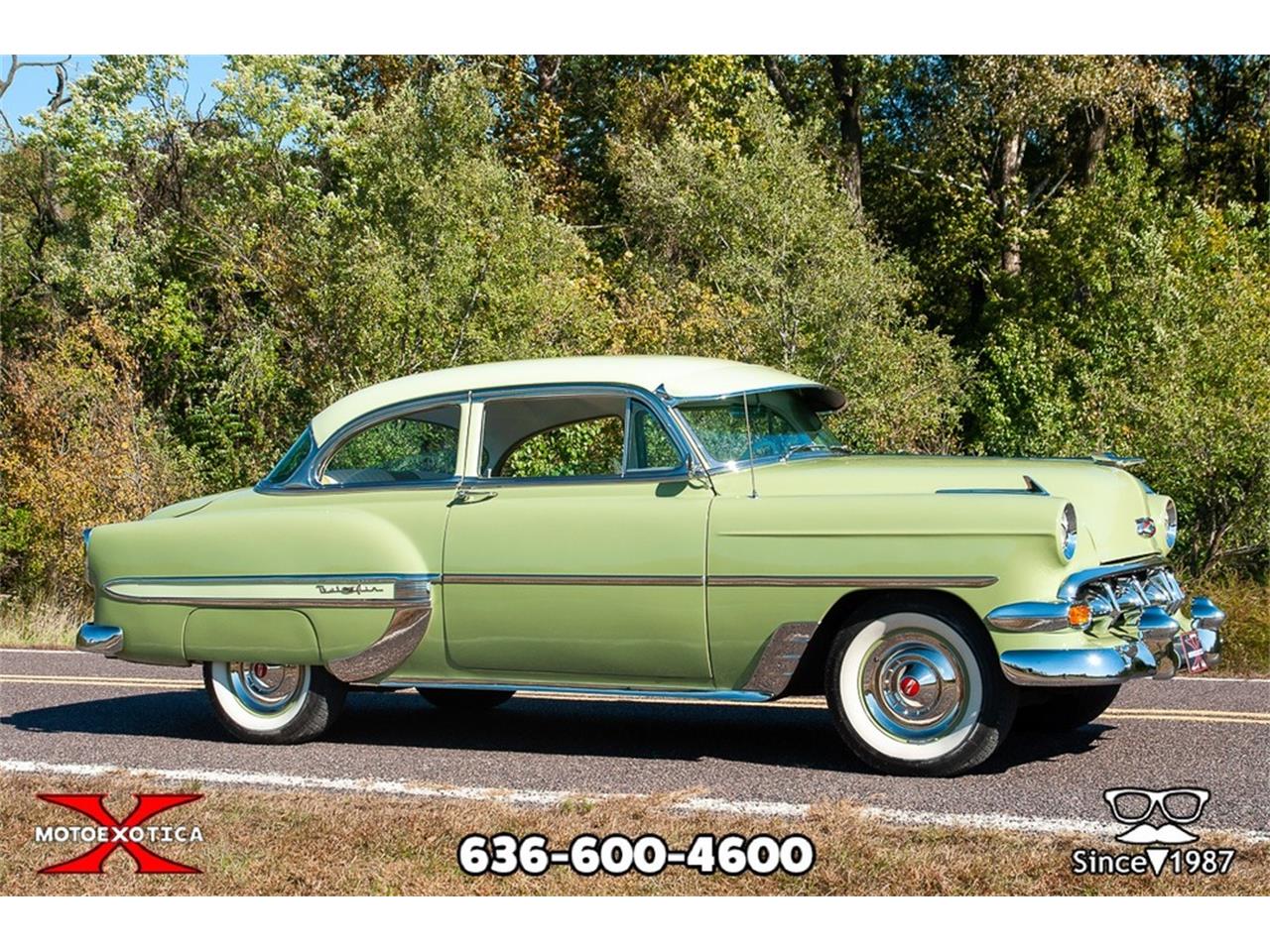 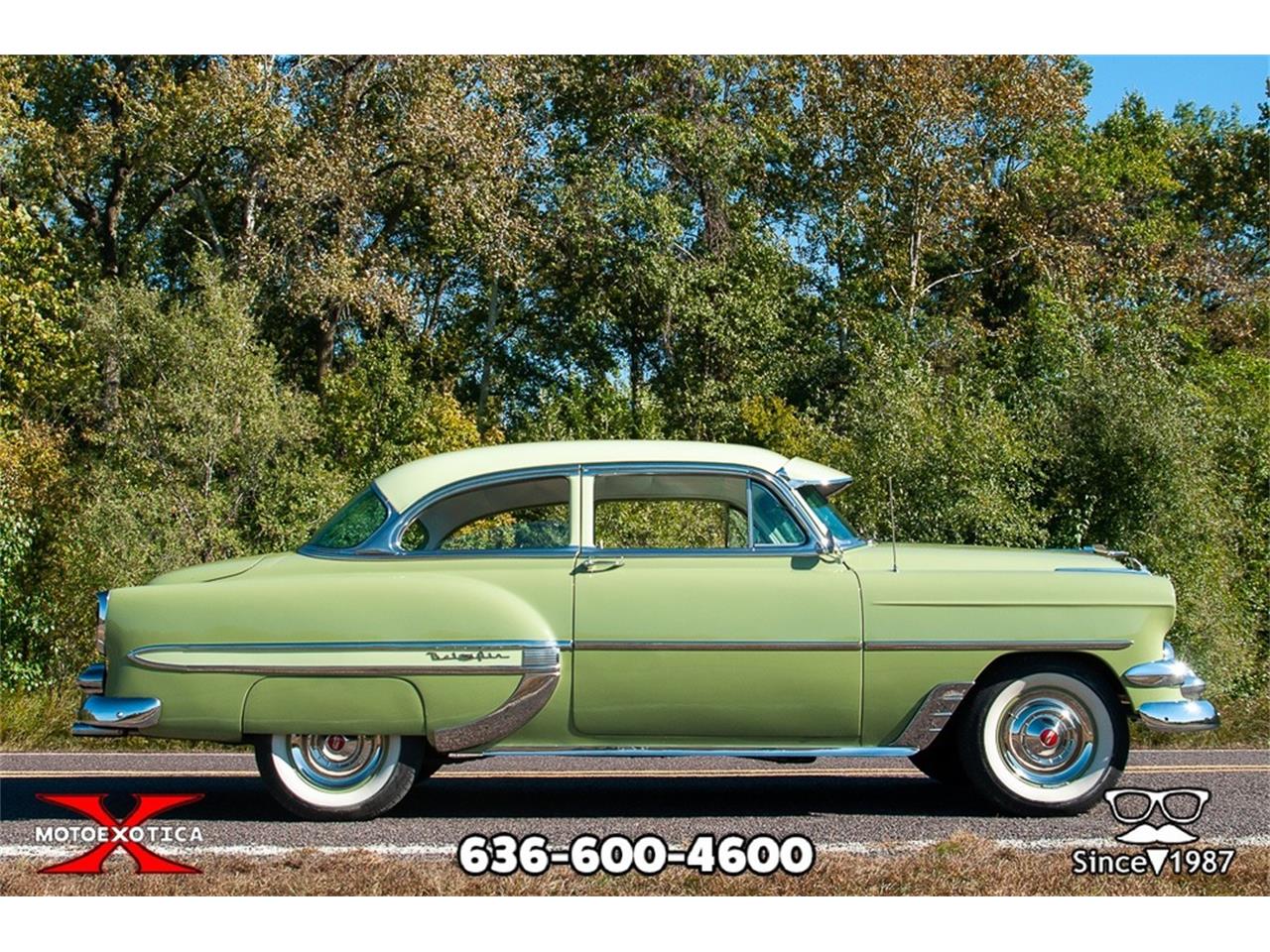 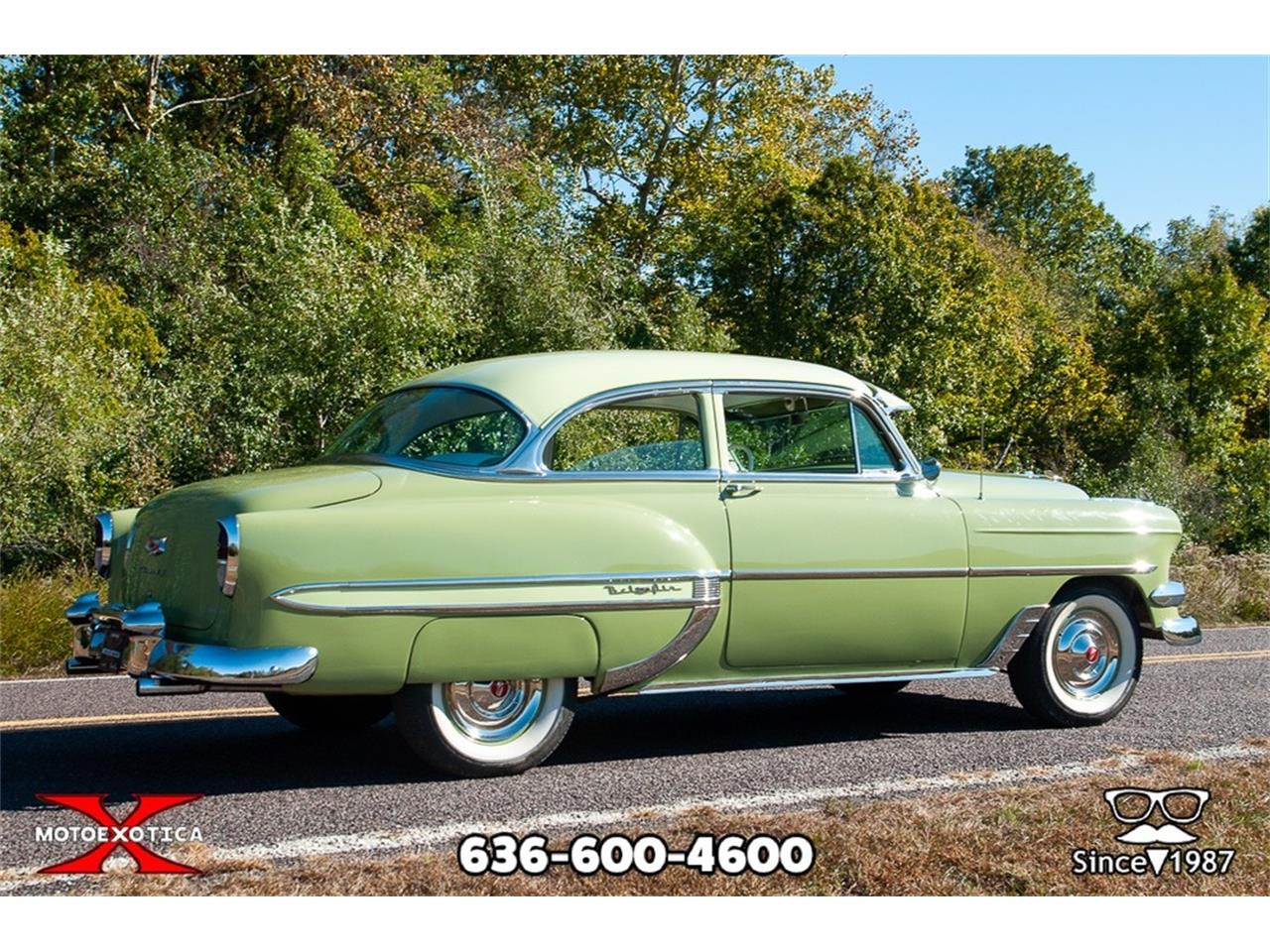 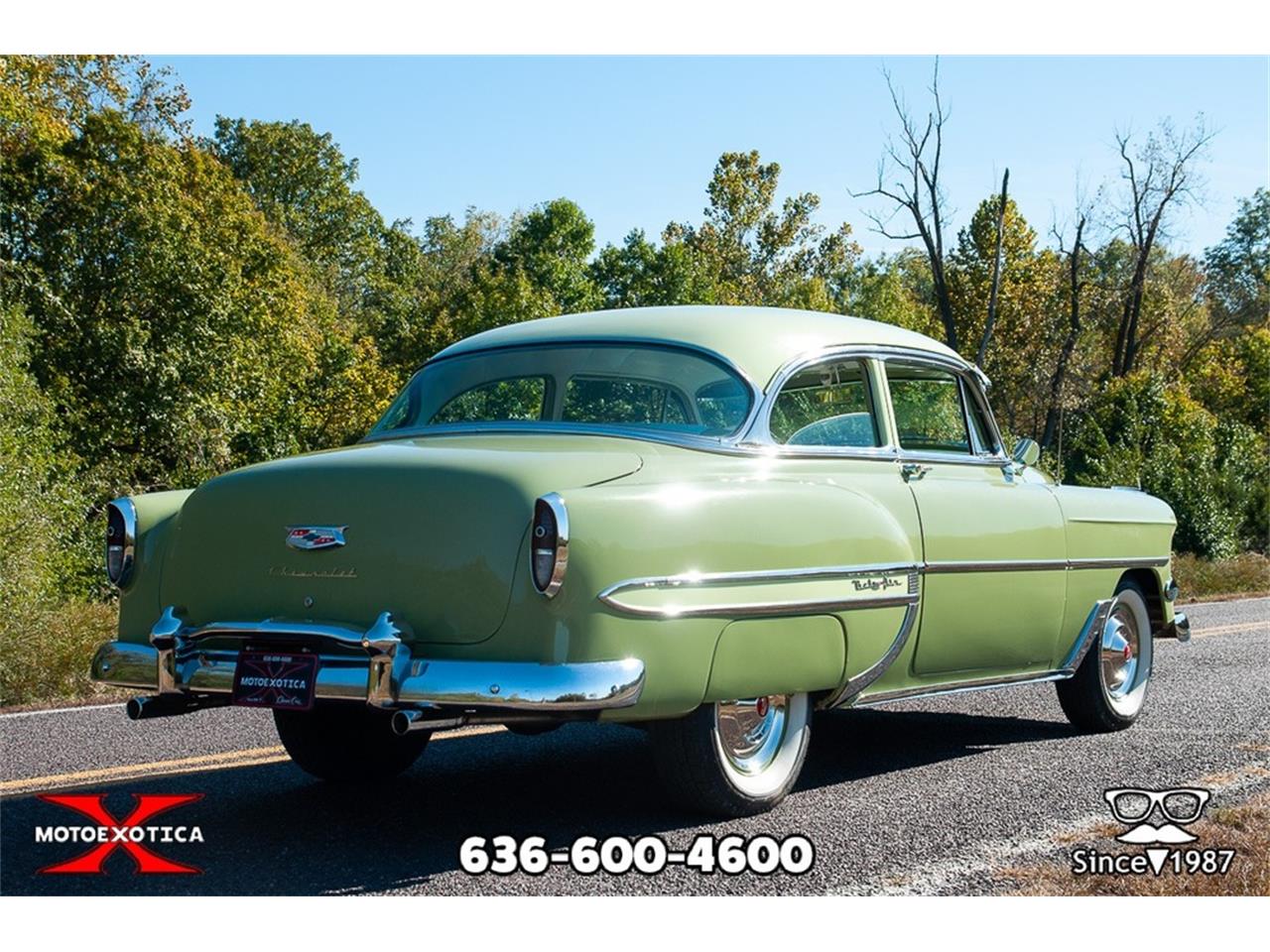 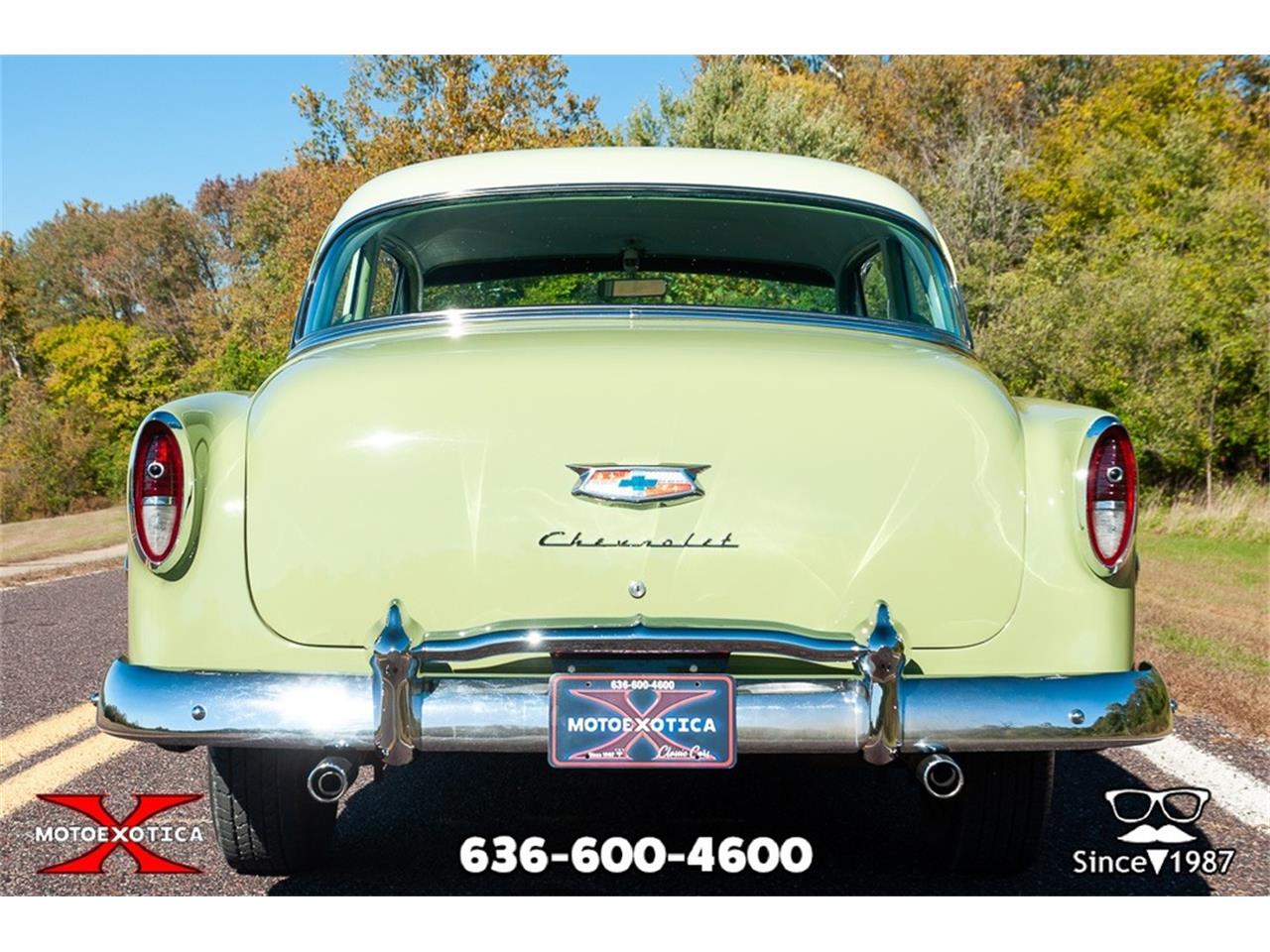 1954 Chevrolet Bel-Air Two-door Sedan Final model year of first-generation Bel-Airs Magnificently restored and correct two-door sedan 235 CID inline Blue Flame six-cylinder engine with Fenton header and dual exhausts Three-speed manual transmission CorrectShoreline Beige over Bermuda Green (code 554) exterior with white and two-tone green interior Vintage air-conditioning Very tidy and nicely presented trunk Own this Vehicle from $409 per month-call 636-600-4600 After three model years as a coupe styled like a convertible, Chevrolet's Bel-Air landed atop the model range for 1953. MotoeXotica Classic Cars is pleased to present this beautifully restored 1954 Bel-Air two-door sedan, which was made in GM's Los Angeles, California factory (VIN code L). This Bel-Air is dressed in it's correct to the tag Shoreline Beige over Bermuda Green (code 554) exterior, the car's paint and trim are in excellent condition and is a very handsome color! The bodywork is straight, including the external sun visor, the engine bay is extremely tidy, the battery looks new, the cargo area is lined in white with a black floor mat and the spare tire wears a matching cover and there's even a matching wheel cover back there for the extra tire. The car's chrome bumpers shine brilliantly in the light. This top-of-the-line mid-50s Bowtie rolls on Coker Classic wide whitewall tires, size 215/75R15 at all four corners. Each tire is mounted on a steel wheel topped by a factory wheel cover. The tires and wheels are all in very good condition. Under the hood is Chevrolet's 235 CID straight six-cylinder engine, often nicknamed "The Blue Flame." It has received a few mild upgrades, such as a performance Davis Unified Ignition distributor and a Fenton split exhaust system that ends in dual pipes out back. This motor is bolted to a three-speed manual transmission. Inside, the car sports a brilliant, fresh white and green color scheme, replacing the original green cloth and vinyl interior (code 311). The greet and white bench seats look fantastic, the contrasting dark green carpeting is in excellent order, as is the white headliner. The Bermuda Green metal instrument panel offers a bit of contrast to the green of the seats and the carpet but the amp gauge is inoperable. The inner door panels' condition echoes that of the rest of the interior. There's a column-mounted shift lever for the "three-on-the-tree" manual and a modern Kenwood AM/FM stereo with CD player has been put in over the standard factory AM radio. The 1953-1954 Chevrolet range had a unique and somewhat awkward look about it and much of this stemmed from its role as a transitional model to introduce a raft of changes that were necessary to pave the way for the introduction of the 1955-1957 range that really established the Bel-Air as a cultural icon. The pre-war technology, such as torque tube drive, six-cylinder splash feed engines, knee action suspension, split windshields, etc., of the early models was phased out and the foundations for the first post war modern Chevrolet passenger car were finalized in this 1953-1954 model. The Bel-Air series featured a wide chrome strip of molding from the rear fender bulge to the rear bumper. The inside of this stripe was painted a coordinating color with the outside body color, and "Bel-Air" scripts were added inside the strip. Lesser models had no model designation anywhere on the car, only having a Chevy crest on the hood and trunk. 1953 was the first year for a curved, one-piece windshield. Bel-Air interiors had an optional massive expanse of chrome across the lower part of the dashboard (most were painted), along with a deluxe Bel-Air steering wheel with full chrome horn ring. Carpeting and full wheel covers rounded out Bel-Air standard equipment. For 1954, the Bel-Air stayed essentially the same, except for a revised grille and taillights, and a revised engine that had insert bearings and higher oil pressure, needed for the full-flow oil filtration system that was not available prior to 1954. Prior to 1954, the 235 and 216 cubic inch six-cylinder engines had Babbit bearings and scoops to create oil pressure at the bottom of each rod and the oil pressure was standard at 15-30 PSI. During these years, there were three engine choices, depending on the transmission ordered. Both 235 cubic inch engines were "Blue Flame" inline six-cylinder OHV engines, featuring hydraulic valve lifters and aluminum pistons. The 235 cubic inch displacement engine was standard on stickshift models, with solid lifters and splash plus pressure lubrication including Babbit bearings. Powerglide cars got a version which had hydraulic lifters and full pressure lubrication. In 1953 and 1954, Bel-Airs could be ordered in convertible, hardtop coupe, two- and four-door sedans, and, for 1954, the Beauville station wagon which featured woodgrain trim around the side windows. Many new options, once available only to more expensive luxury cars, became offered starting in 1953, including power steering and the Guidematic headlight dimmer in 1953; and power brakes, power two-way front seat and power front windows in 1954. Competition to this Bel-Air in 1954 included Dodge's Coronet, Ford's Crestline, Hudson's Wasp, Kaiser's Deluxe, Nash's Statesman, Plymouth's Belvedere and Pontiac's Star Chief. This classic cruiser has appeal beyond just Chevy and GM fans. Those who lean more toward the stock side of the classic car spectrum will find appeal in the mildly enhanced straight six with three-speed manual, air-conditioning and a modern stereo radio. The color combo inside and out would turn heads and stop foot traffic at a car show or a cruise night event. This car will let its next owner make a statement without making a scene, so you should stop by MotoeXotica Classic Cars to check out this '54 Bel-Air today! VIN: 541004938 This car is currently located at our facility in St. Louis, Missouri. Current mileage on the odometer shows 4,780 miles. It is sold as is, where is, on a clean and clear, mileage exempt title. GET OUT AND DRIVE!!! Please Click Here to View Our YouTube Video! Copy &amp; Paste the Link in Browser to View Our YouTube Video: https://youtu.be/ZxqvX6unLFg Note: Please see full terms and conditions listed below that pertain to the purchase of any said vehicle, thank you. 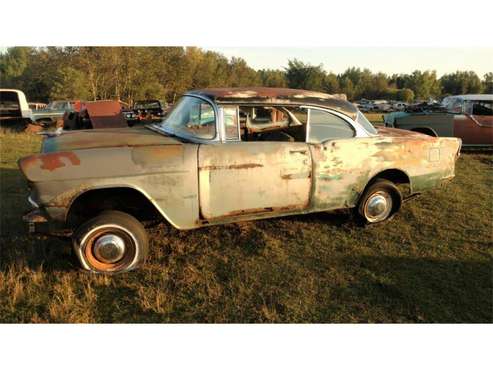 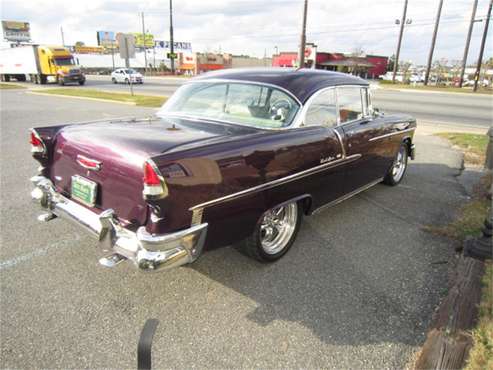 This professionally restored 1957 Chevrolet Nomad is powered by a great running ZZ1 350 engine with Roller Cam and Bearings coupled to a smooth shifting 4-Speed manual transmission. It is also being pumped with extra air by Weiand Street Superchar... 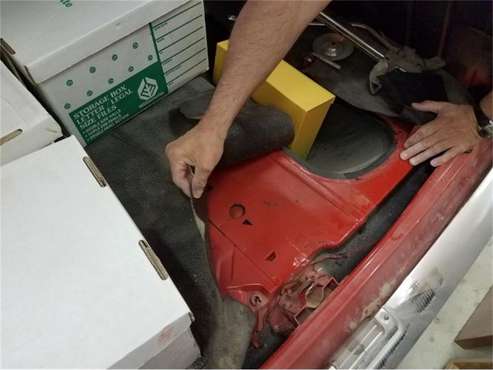 1957 Chevrolet Bel Air Hardtop All original, always garaged. Never wrecked or abused. Second Owner. Runs well. Please Note The Following **Vehicle Location is at our clients home and Not In Cadillac, Michigan. **We do have a showroom with about 25... 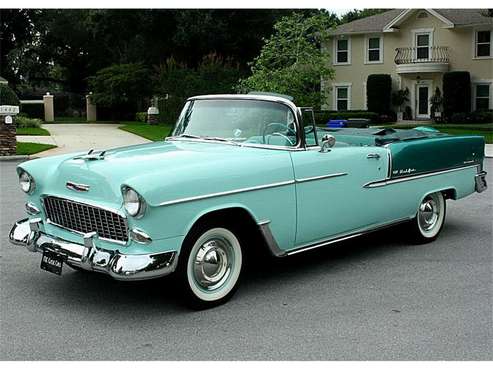 1955 CHEVROLET BEL AIR CONVERTIBLE FRAME OFF RESTORED - RUST &amp; ACCIDENT FREE ONLY ABOUT 200 MILES SINCE COMPLETED The 1955 Chevrolet Bel Air is one of the most beautiful cars to ever leave Detroit and the collector market is continuing to r... 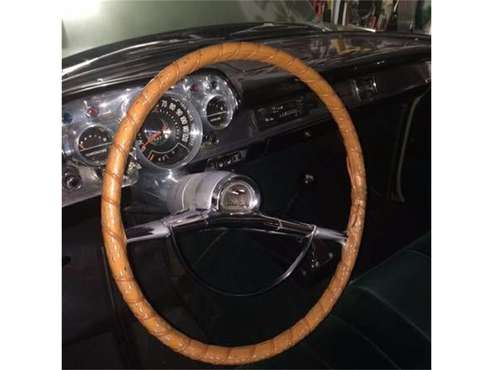 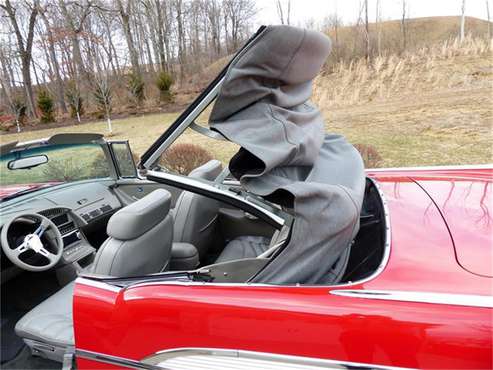 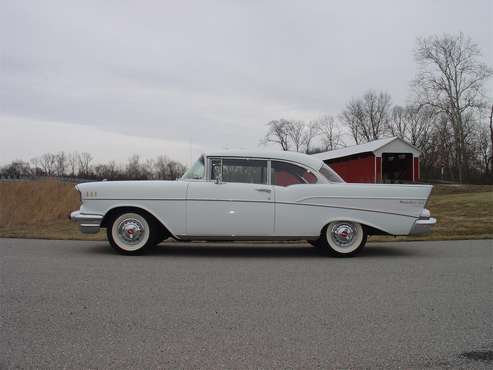 If your looking for a real nice rust free 1957 Chevrolet Bel Air 2 dr Hardtop Then this is the one !! Not exactly sure when the car was restored but is still a very nice car all the glass stainless &amp; chrome except for a few small spots on the ...