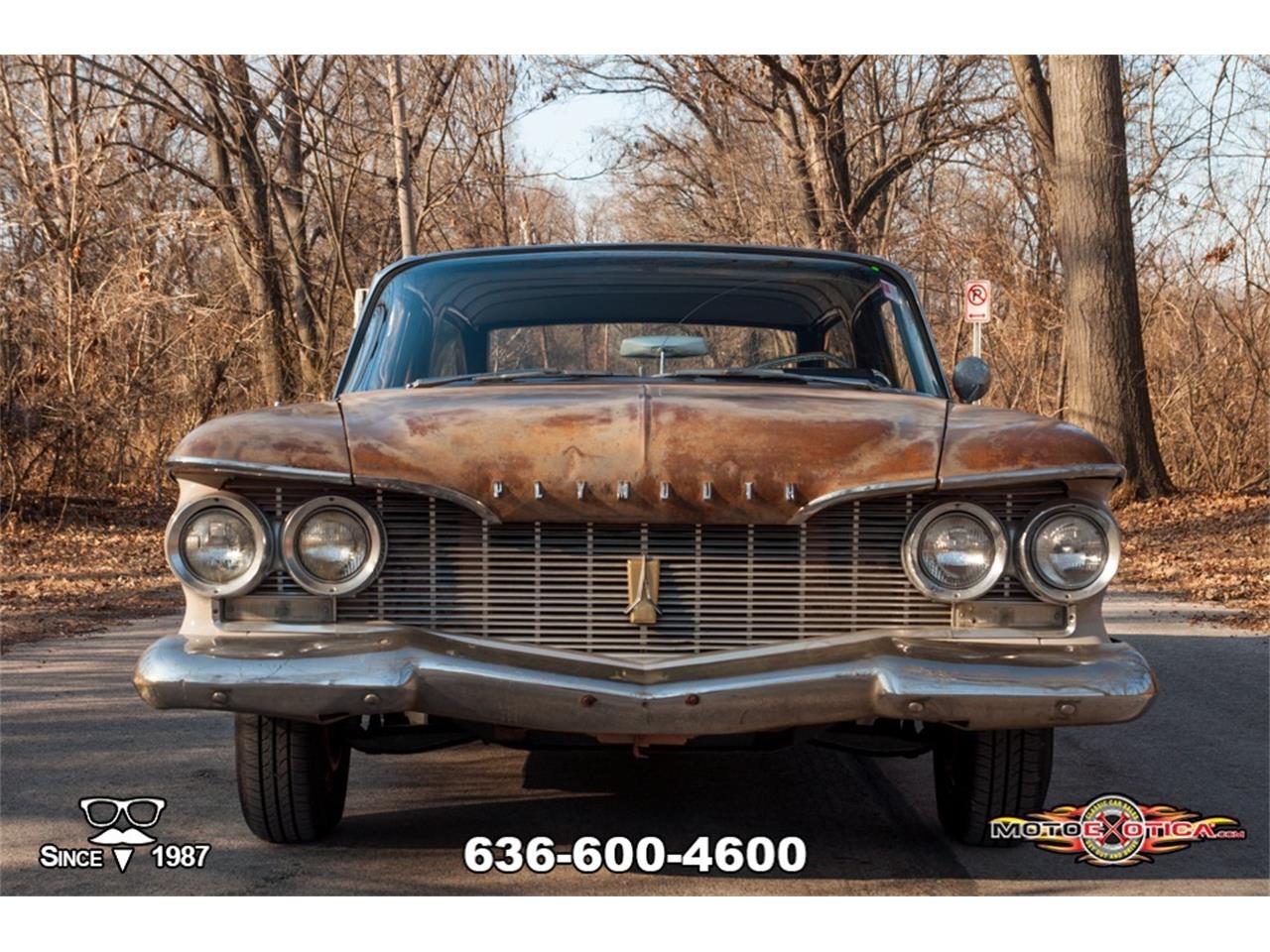 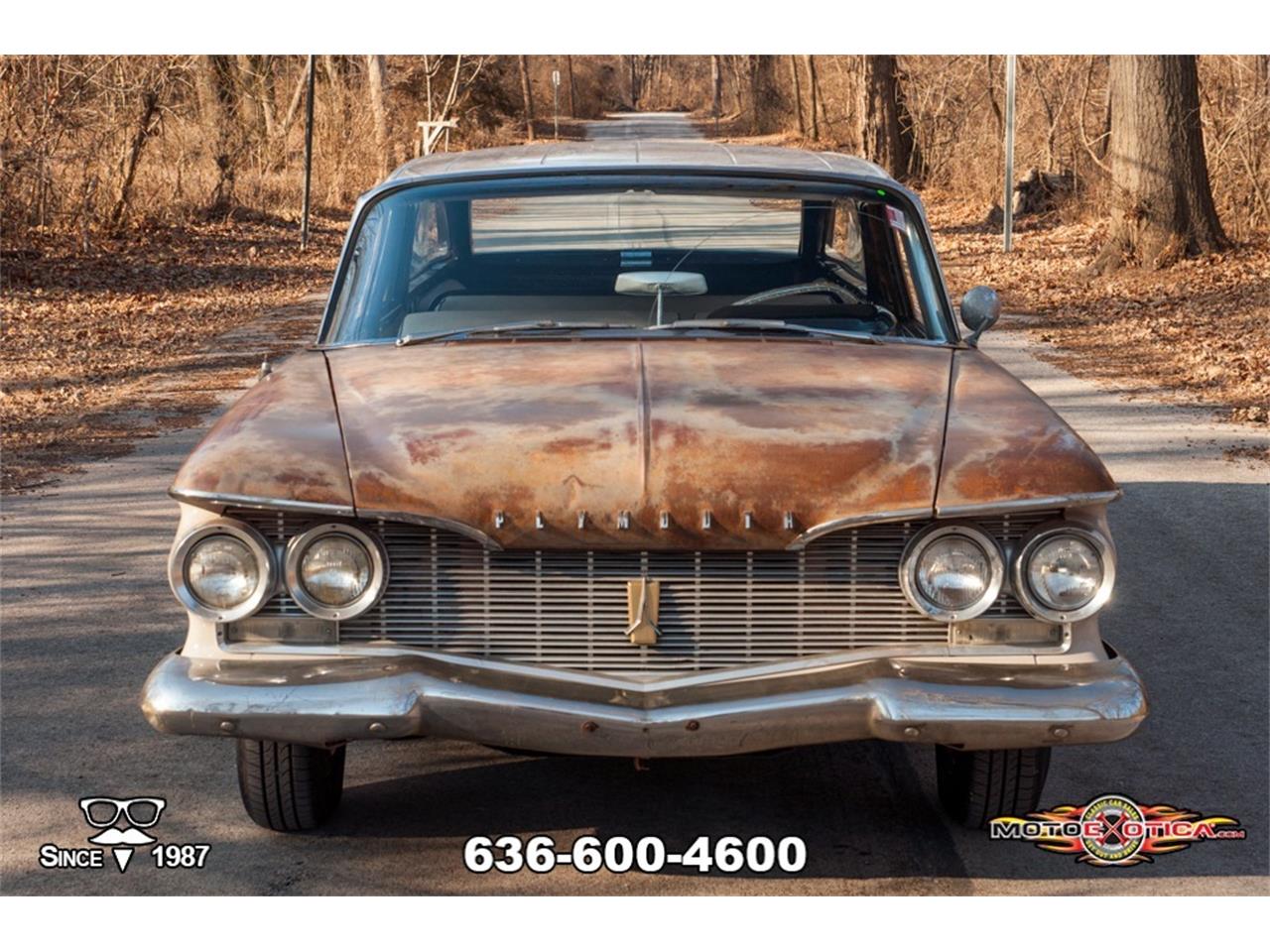 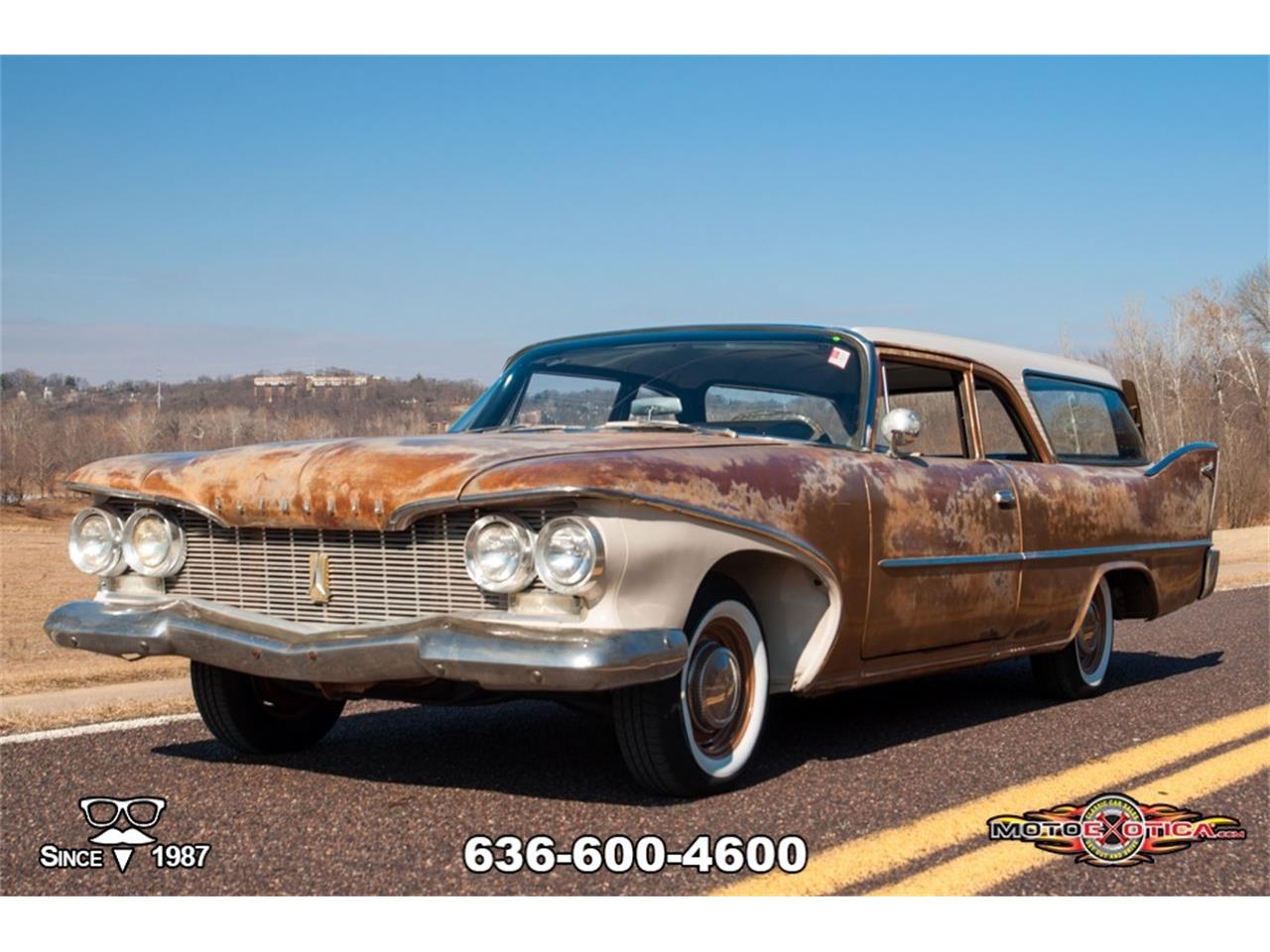 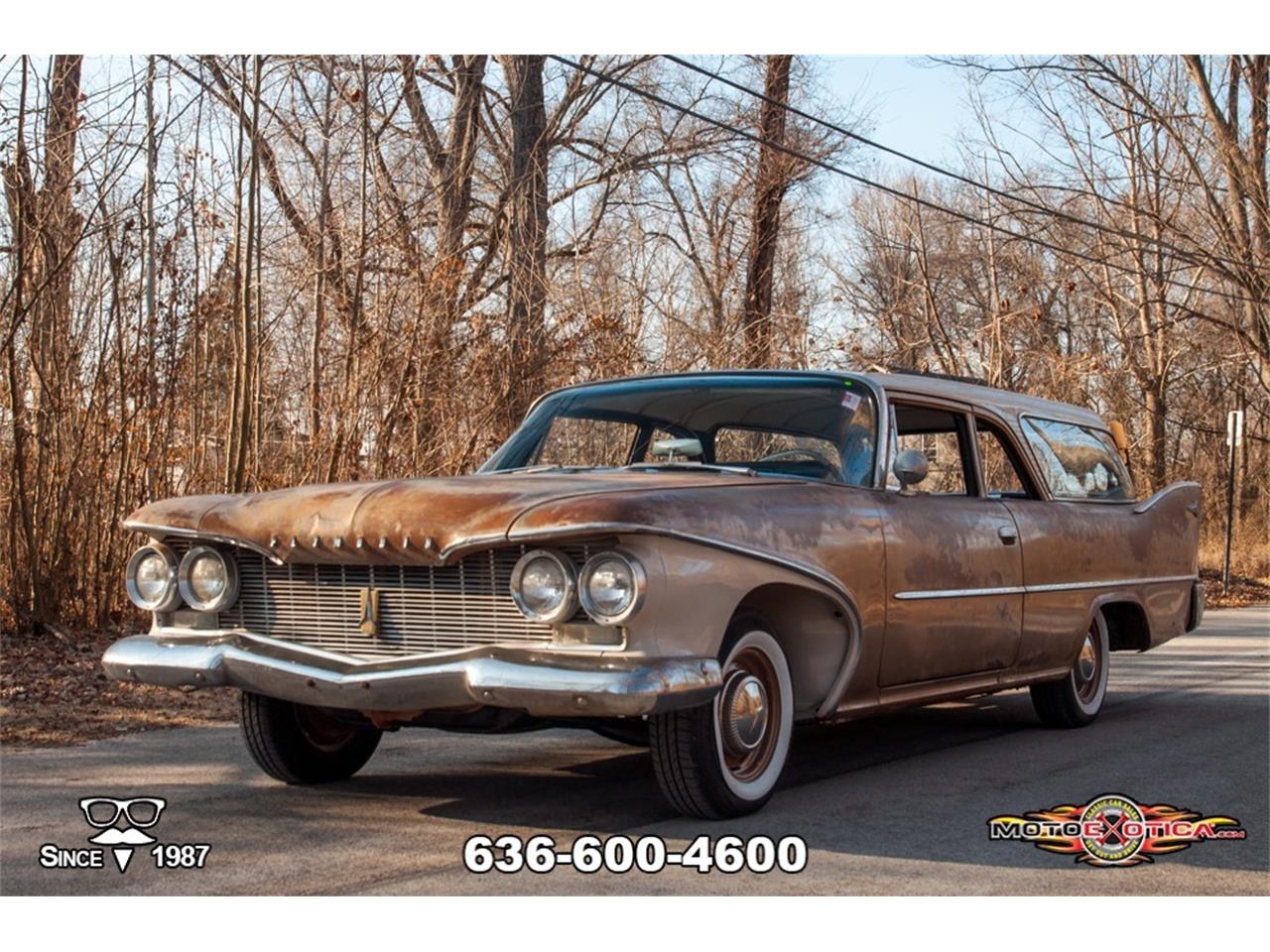 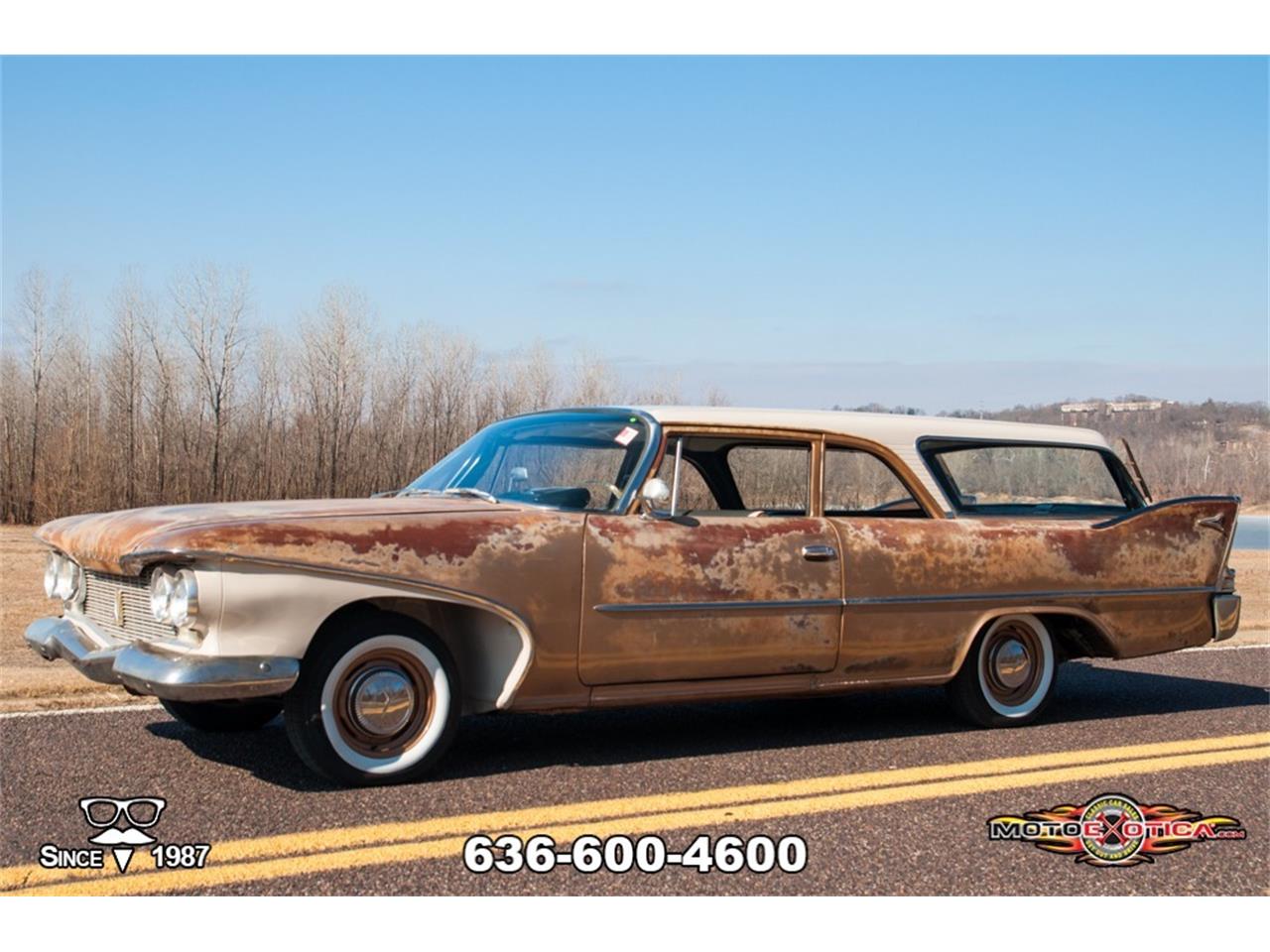 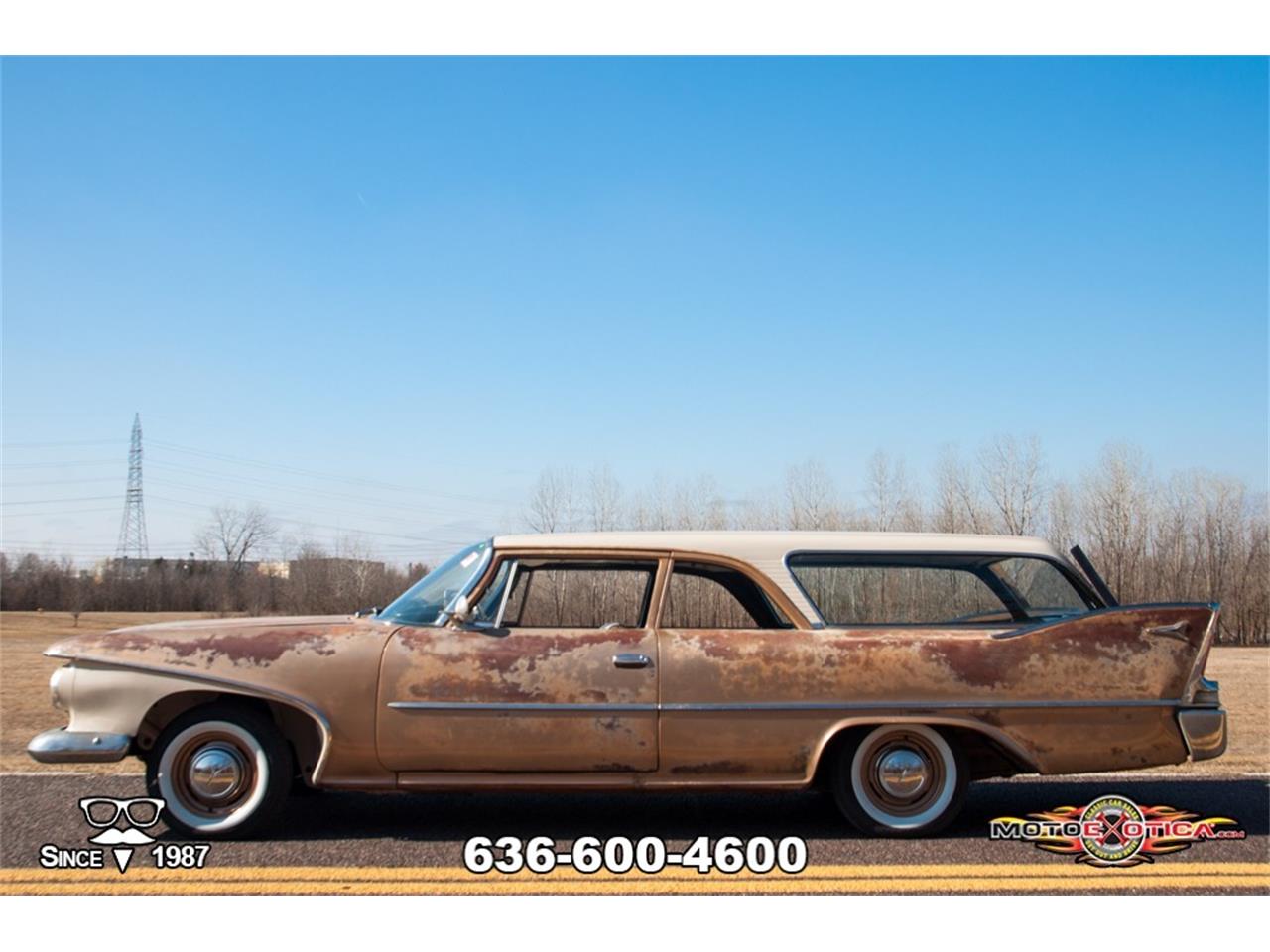 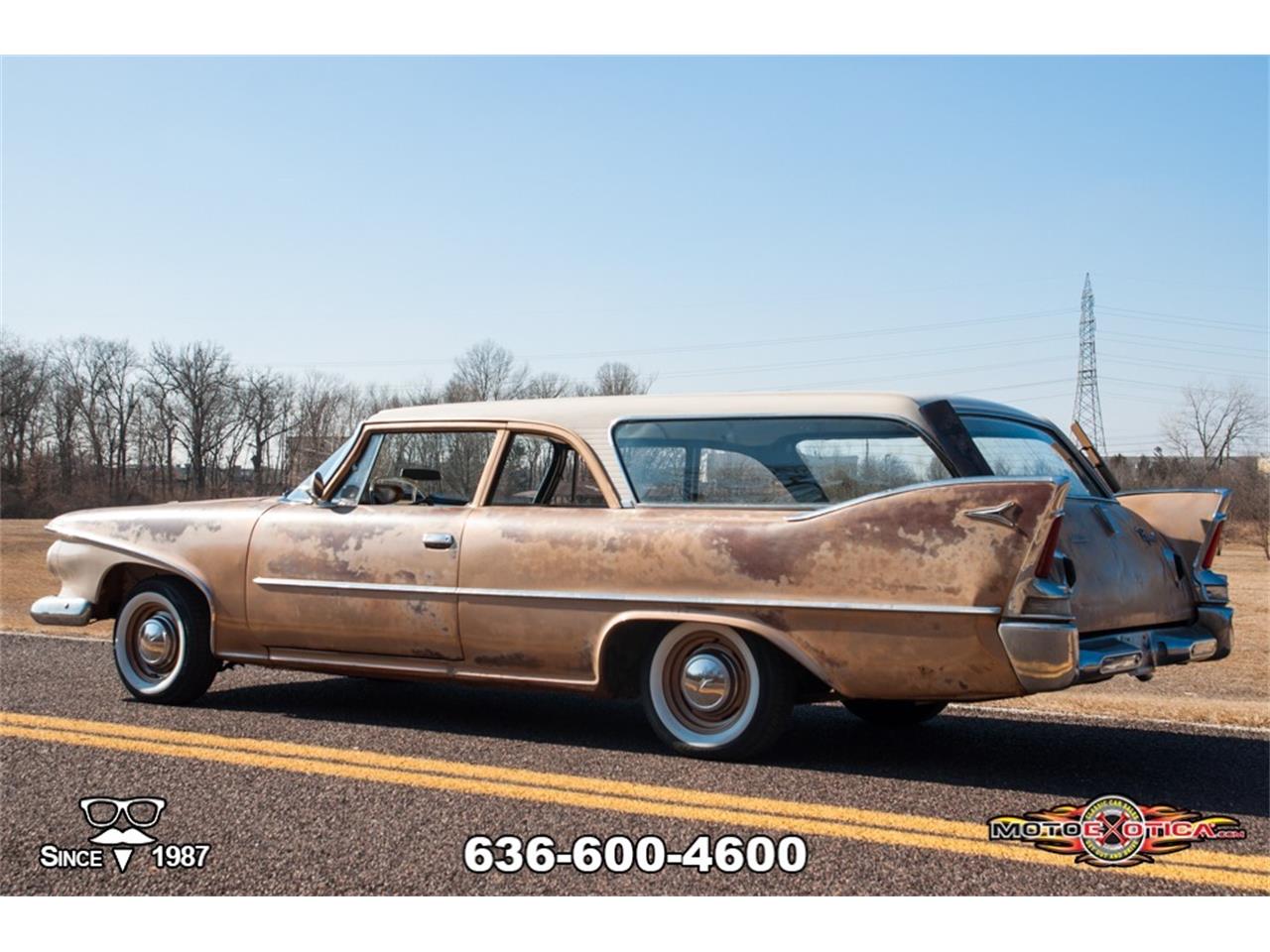 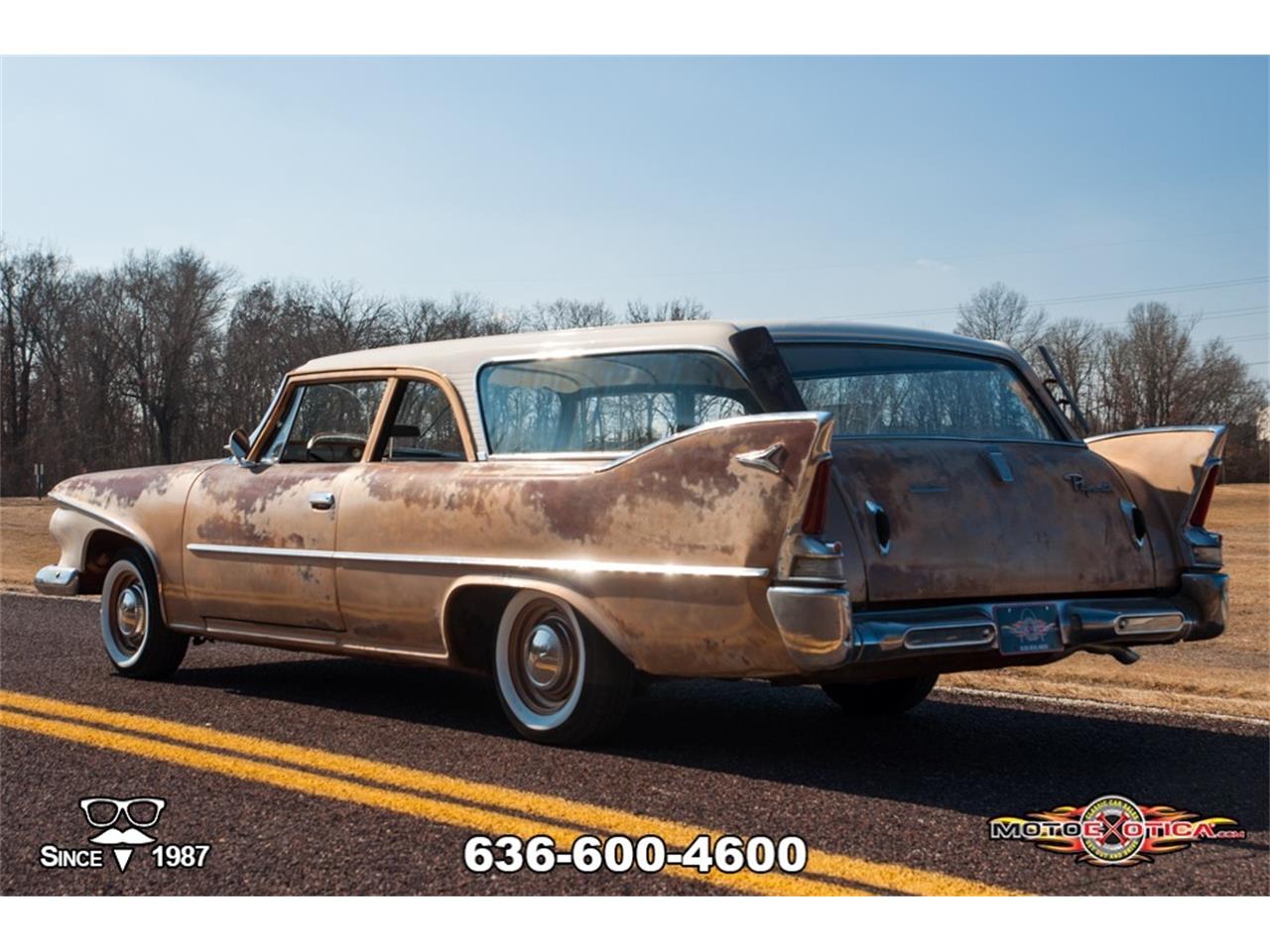 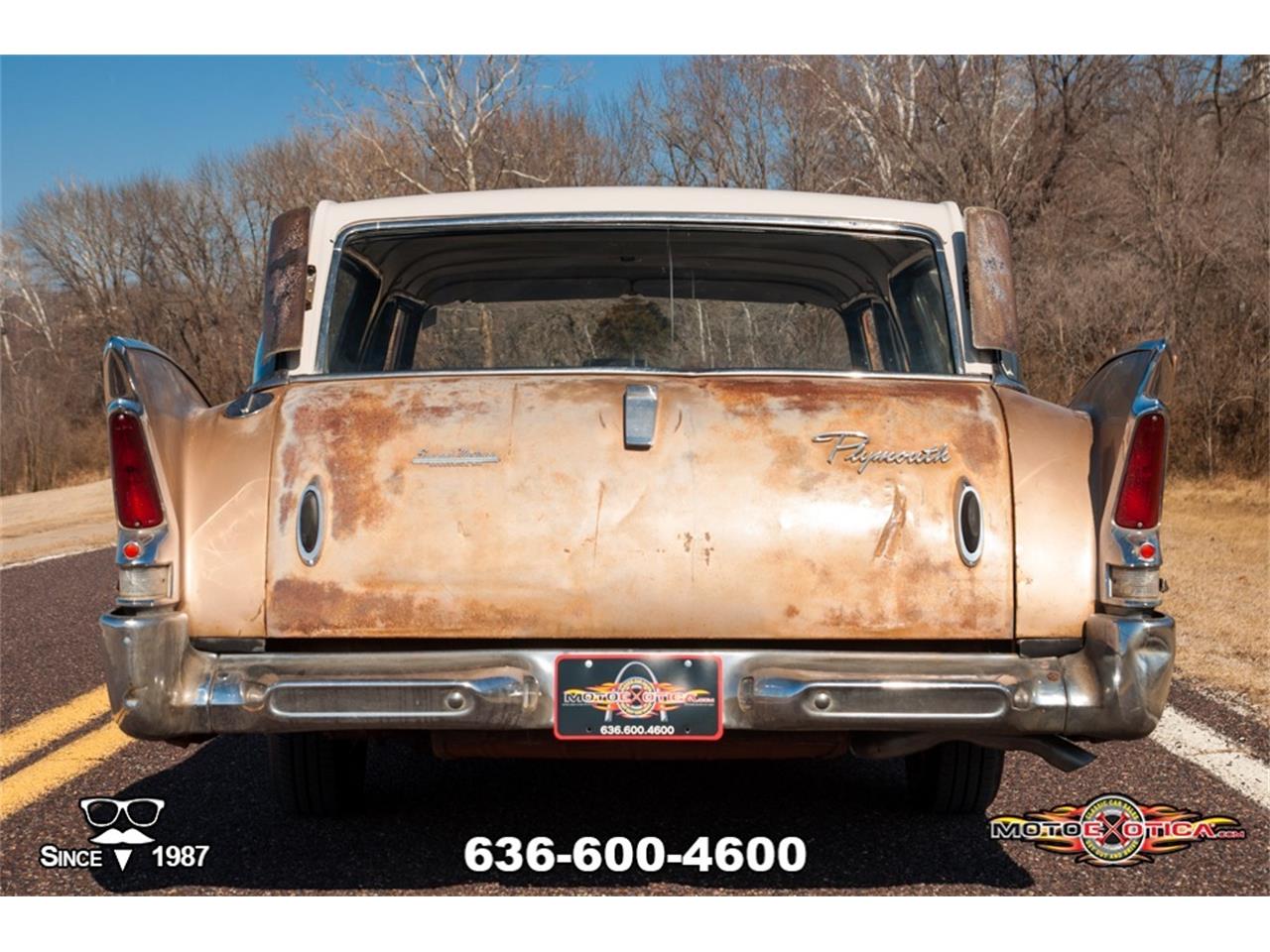 1960 Plymouth Deluxe Suburban Station Wagon Car has had the same prior owner since 1970, as evidenced by the title issue date! Car was built here in Missouri, sold new in Missouri and stayed here in Missouri with only two owners until 2014! One of five believed to still exist, this 2 door wagon is one of a handful of the two door wagons produced by Plymouth for 1960 1960 was Plymouth's final year for tailfins Reportedly has its original 318 CID V-8 "A" engine, completely rebuilt, as stated by previous owner Three-speed column-shift manual transmission Original Desert Beige over newer white paint with 57 years of patina Original new old stock copper/white interior and original glass Newly rebuilt drum brake system with lines and wheel cylinders New exhaust system Own this Vehicle from $375 per month-call 636-600-4600 Looking for a different vehicle that is rarely seen at any car show? MotoeXotica Classic Cars is pleased to present this 1960 Plymouth Deluxe Suburban 2 Door Station Wagon. The Deluxe Suburban was Plymouth's two-door station wagon and only a handful were made in 1960. It is more rare than a Chevy Nomad wagon! This example was made just down the street from our shop at Chrysler's former Fenton, Missouri assembly plant and was once sold by Sewell Motors in Brunswick, Missouri, northwest of Columbia. It left the assembly line in Desert Beige and Caramel Metallic. A previous dealer found it in mid-Missouri in 2014 and brought it to Georgia. Prior to its "rest," it had been owned by the same person since 1970!Car was built here in Missouri, sold new in Missouri and stayed here in Missouri with only two owners until 2014! Finished in an interesting amalgam of white and Desert Beige, this wagon is loaded with patina. What makes it interesting is that it has been repainted on the roof and coves ahead of the front wheels, so they appear better-than-average while the rest of the body shows moderate to heavy patina. You could elect to keep it the way it is and make a vehicle fashion statement. The trim is in decent overall shape, with some blemishes visible at close range. There are various blemishes scattered around the body The wagon's original windows are clear and intact but the windshield evidences some delamination on the passenger side. The lights are haze-free and crack-free, though the left front marker light lens is broken. Overall, the bodywork appears straight and solid. The engine bay is quite tidy and the battery appears new. The bumpers fit well to the body and are in decent condition. This car rides on Hankook Optimo radials with Atlas Portawall tire trims affixed. Each tire surrounds a steel with affixed with 1956 Dodge wheel covers. Under the hood, as stated by the prior owner, is a completely rebuilt 318 CID V-8 "A" engine that is reportedly the original unit. Backing that motor up is a three-on-the-tree manual transmission and a 3.54 rear end. Wagon has a new exhaust system and newly rebuilt drum braking system with lines and wheel cylinders, however, heater core has been bypassed. Inside, the wagon has a new old stock (NOS) interior done in copper and cream, which nicely mirrors the exterior two-tones. The previous owner stated that it is literally the last known NOS correct seat material for this particular car! The front and rear bench seats are in great overall condition, as is the contrasting black carpet. Above the driver's head, the white headliner is in satisfactory order though the dome light lens is missing. The unusual ovoid steering wheel, one of head designer Virgil Exner's hallmarks, is in original condition. The inner door panels echo the theme created by the NOS seats and look great. The instrument panel, with its dashboard-mounted rearview mirror, has been repainted and is in satisfactory order The fuel and temperature gauges are inoperable, and there is no radio. Standard equipment on the Deluxe Suburban included: oil filter, turn signals, dual sun visors and tubeless blackwall tires. Unitary construction was hailed as a leap forward for the 1960 Plymouth range. Styling changes included a flat hood from fender to fender, and more pronounced tail fins tacked on the rear. A new grille comprised of close-spaced horizontal blades accented with thin vertical bars appeared. The P-L-Y-M-O-U-T-H lettering was back again, along the front of the hood and the front fenders evoked a wing-like look, with feature lines wrapping around the front corners to the rear of the front wheel openings. This created "coves" between the front wheel openings and the car's nose and thin moldings accented this particular treatment. Side trims were juggled and "shark fin" rear fenders appeared, including on station wagons. Competition to this Plymouth in 1960 included Chevrolet's Nomad and Ford's Ranch Wagon. Two-door wagons were popular with handymen and tradesmen as well as with budget-minded families. This car is currently located at our facility in St. Louis, Missouri. Current mileage on the odometer shows 57,052 miles. It is sold as is, where is, on a clean and clear, mileage exempt title. GET OUT AND DRIVE!!! CLICK HERE TO VIEW OUR YOUTUBE VIDEO!!! OR Copy &amp; Paste the Link Below to Watch the Video: www.youtube.com/watch?v=vtKs3mzBWNA VIN: 3507112591 Note: Please see full terms and conditions listed below that pertain to the purchase of any said vehicle, thank you. 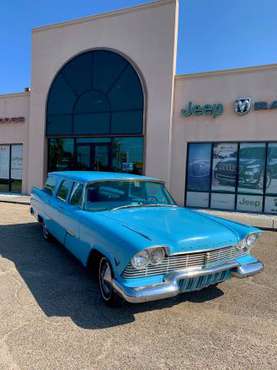 We just finished our last Crusin' The Coast with our car! Almost all 23 of them! It is at Crown Dodge Chrysler in Pascagoula behind Singing River Hospital...This is a 1957 Plymouth Suburban Custom (Yes the wagon version of CHRISTINE) All matching ... 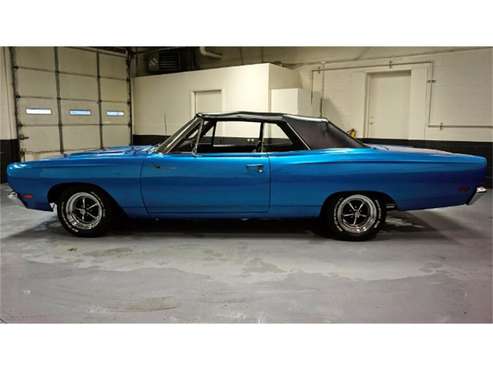 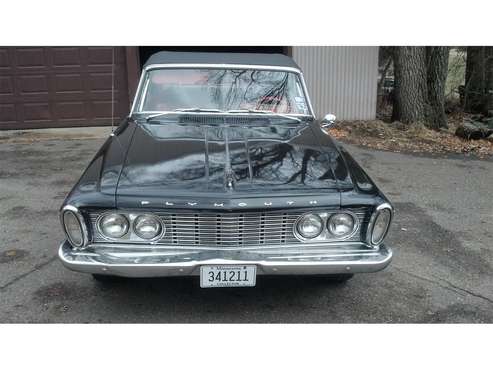 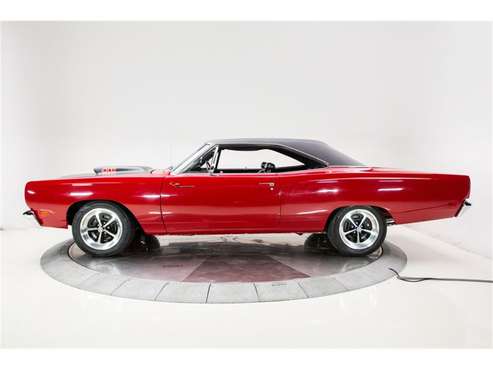 1969 Plymouth Road Runner A12 Tribute So Plymouth created the Road Runner in 1968 to address the entry level muscle car market, we all know that. However, when they decided to take the legendary 440 with a 6 Barrel carb configuration and plant th... 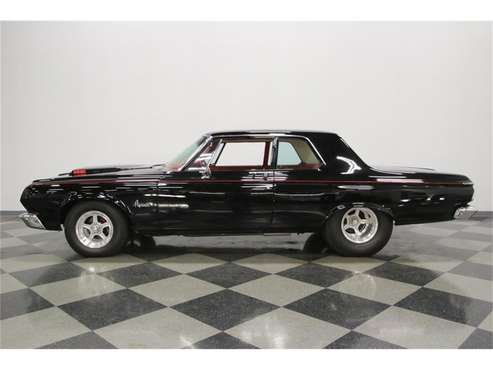 Strip and Street classic for sale. No, that's not stated backwards. This is a radical Hemi build in a beautifully restored Plymouth Savoy that is not for the faint of heart. It comes with full documentation on the engine build including the dyno s... 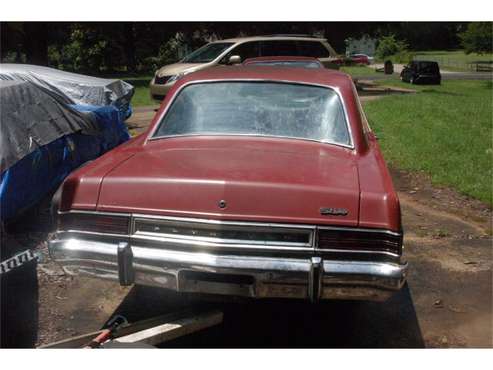 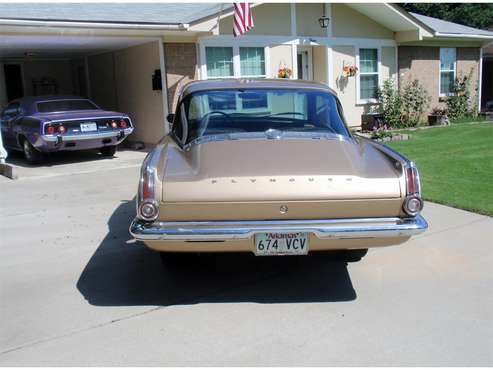 1964 Plymouth Barracuda with 273 V-8 with push button automatic. Engine has been rebuilt twice. Numbers match. 2 brrl Carter Carb. Squawk box even works on AM Dial. I am second owner. New tires. She's ready to drive to her new home.