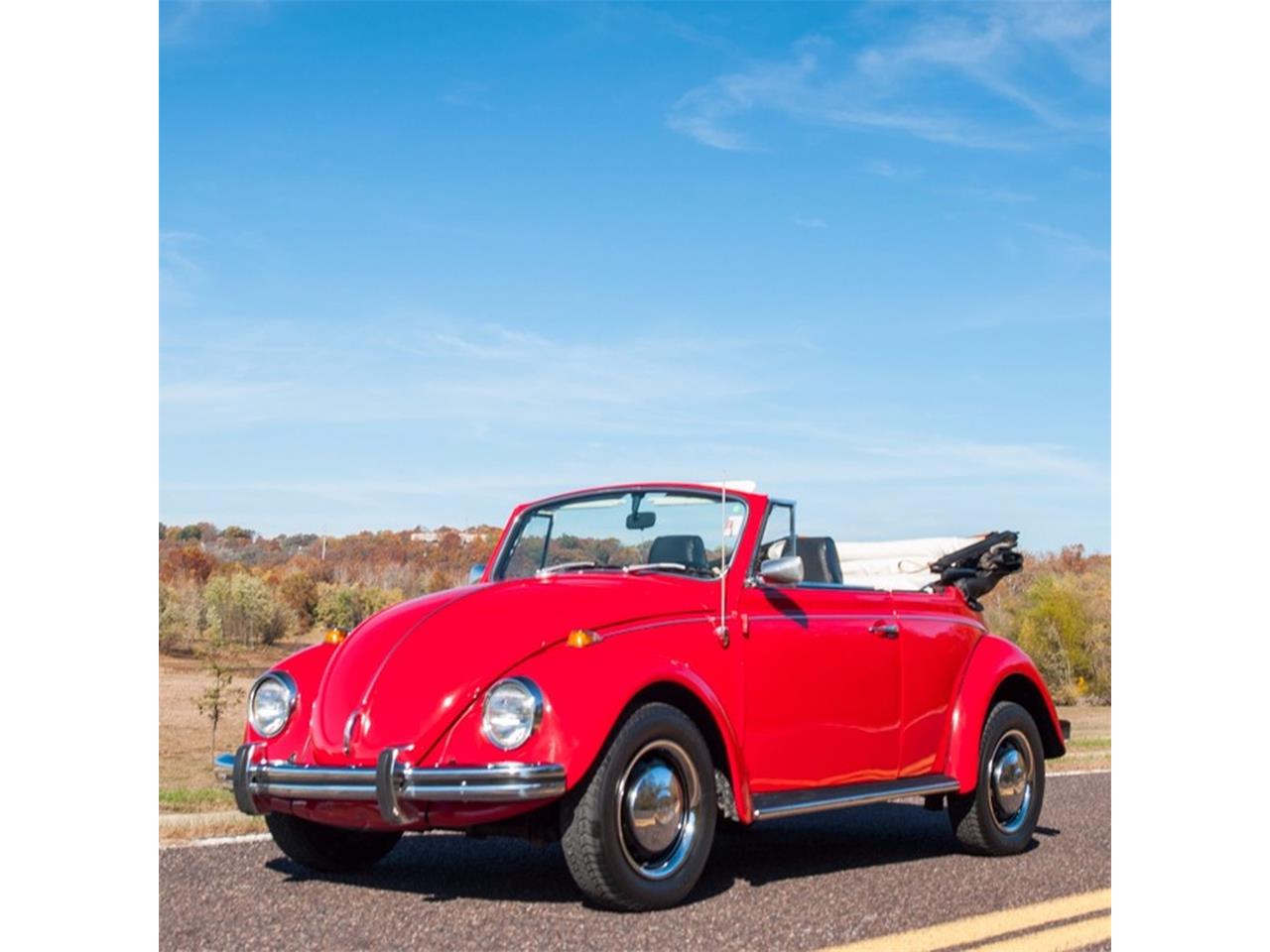 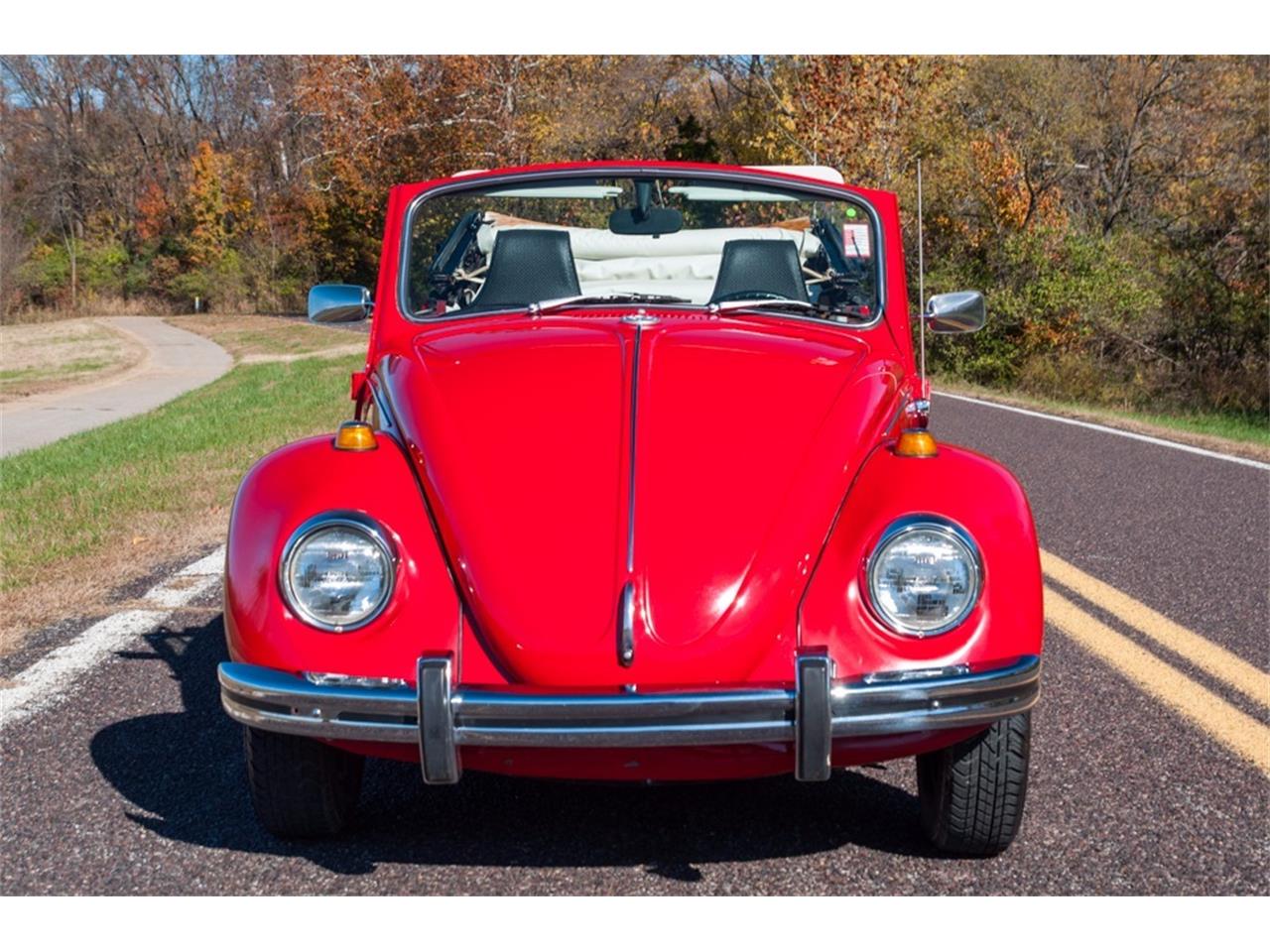 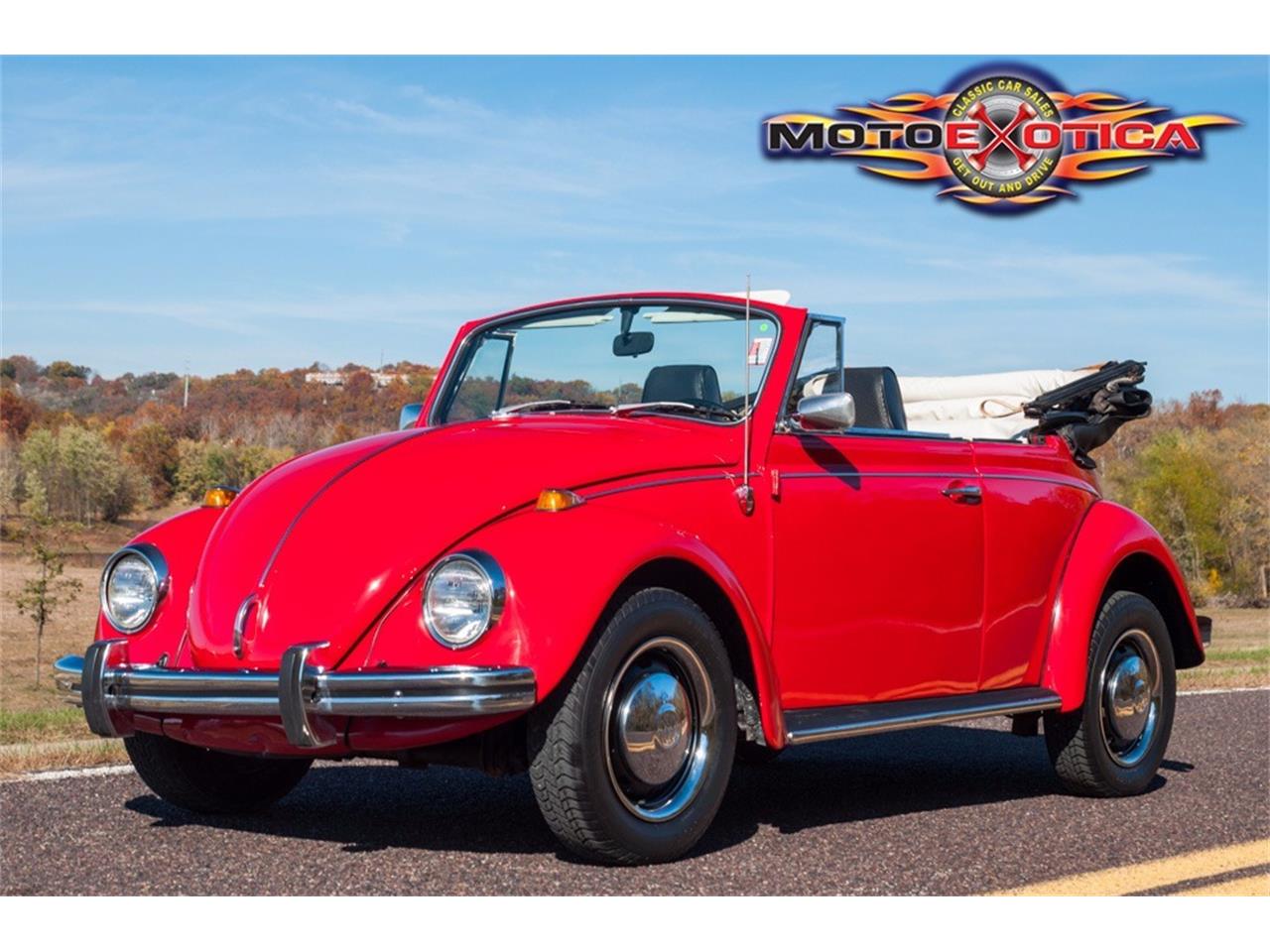 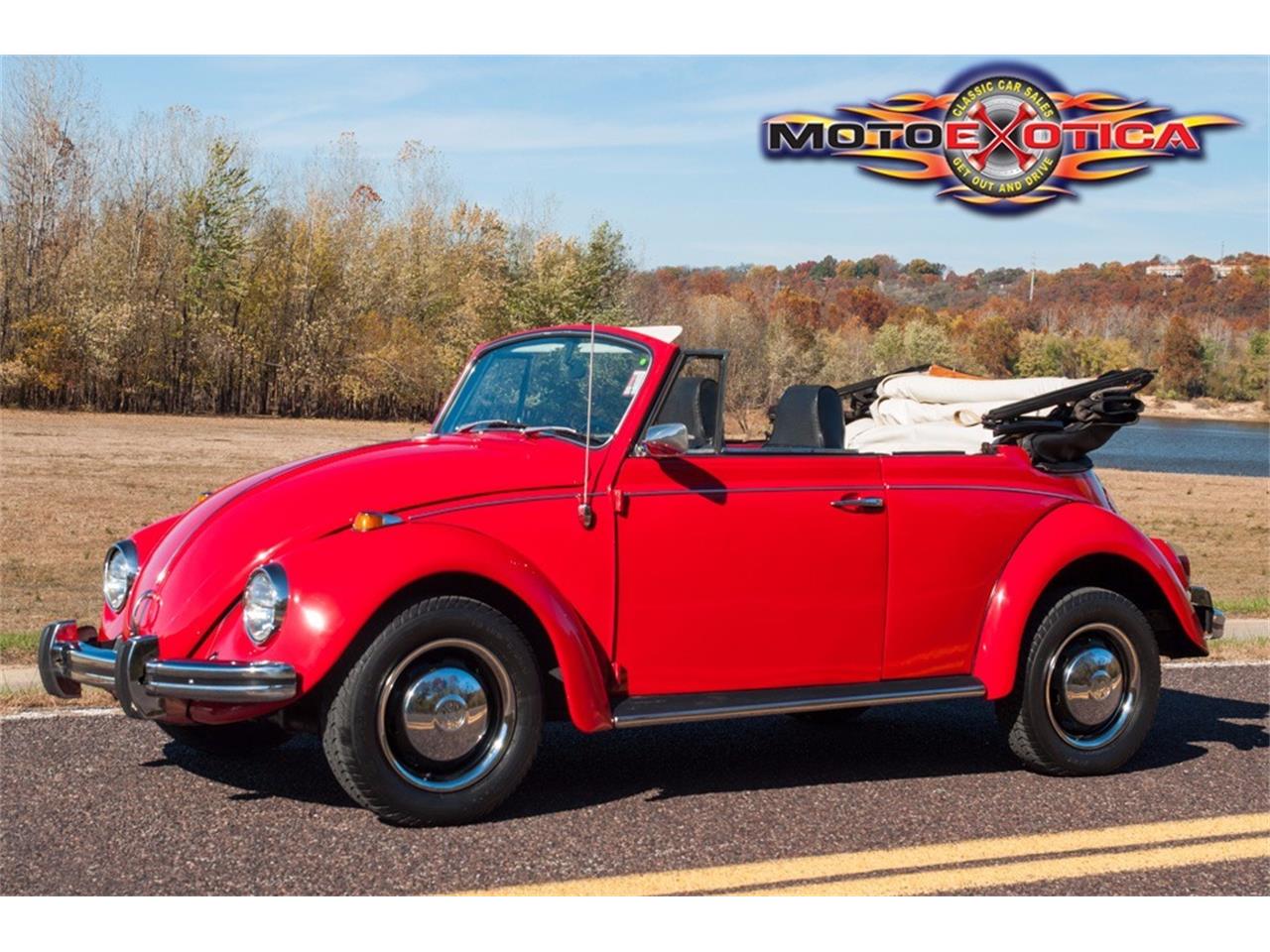 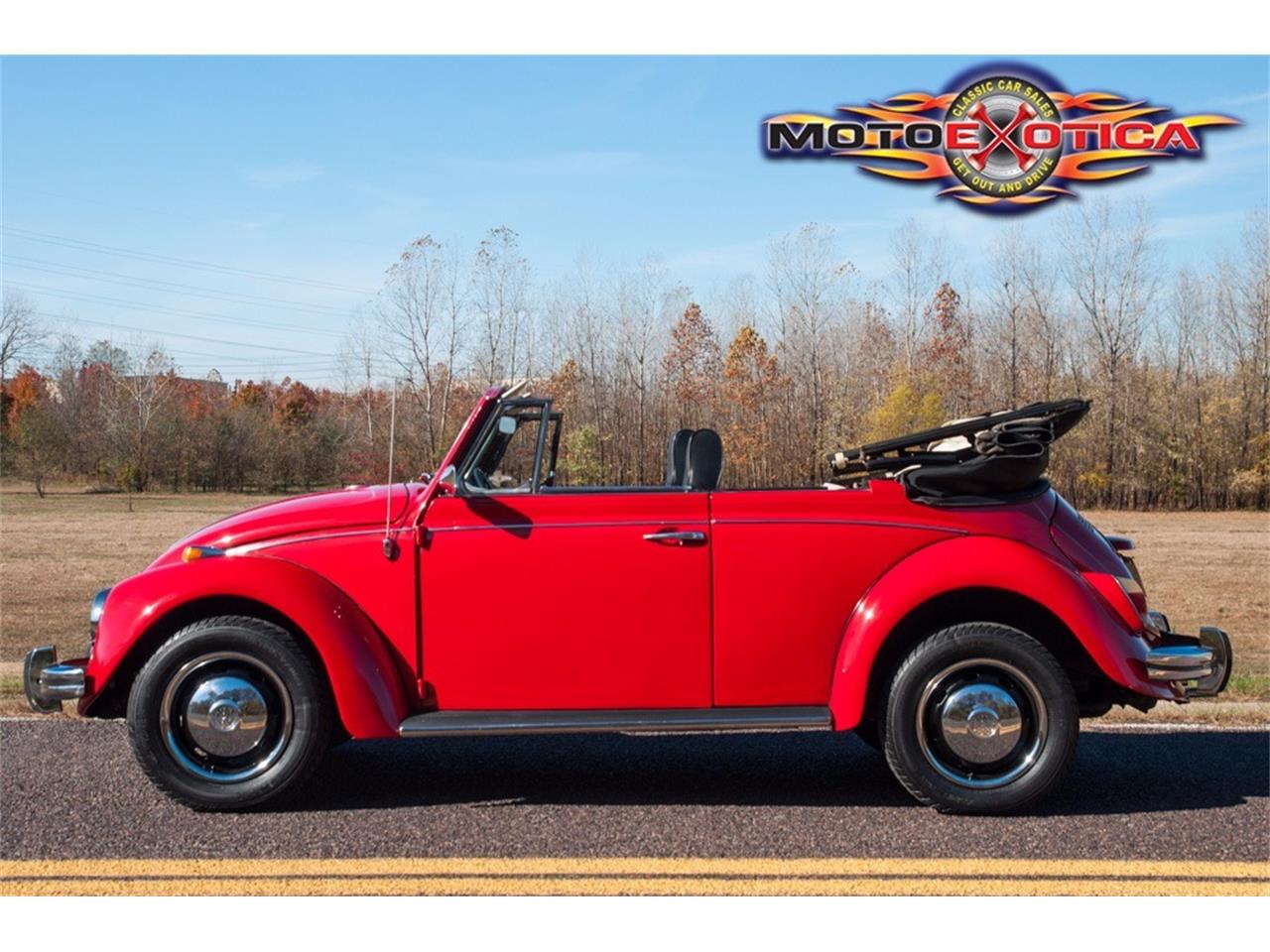 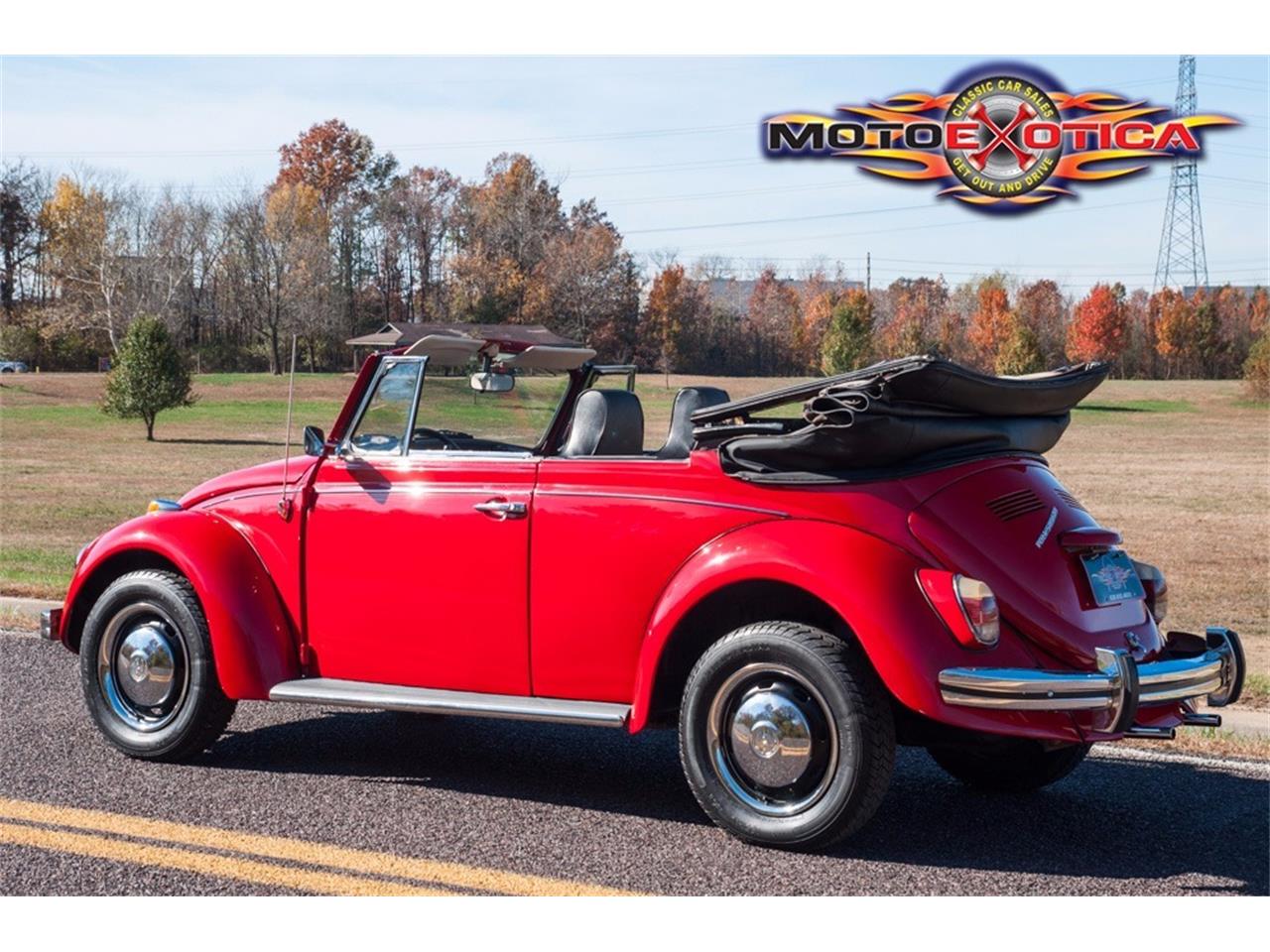 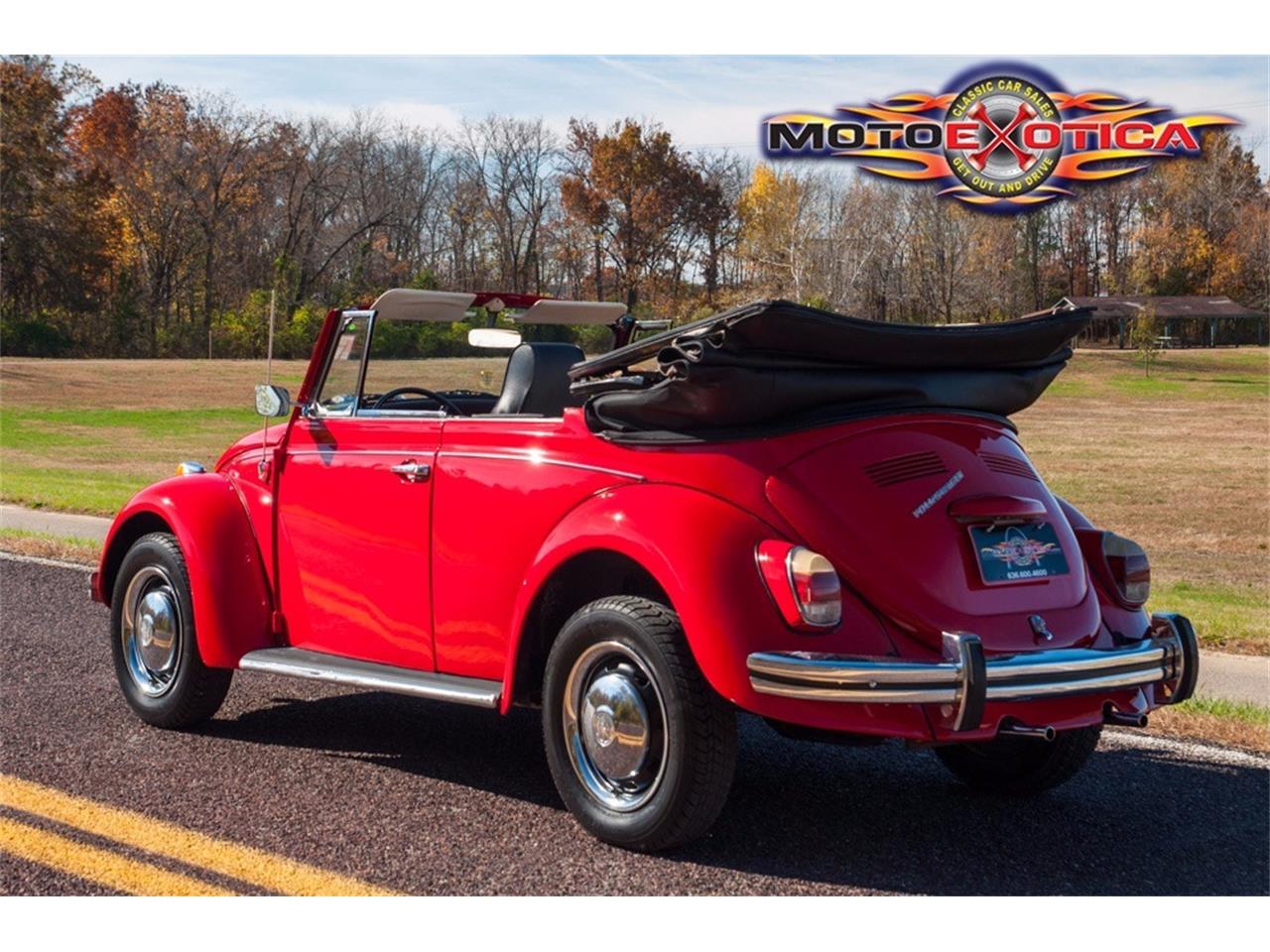 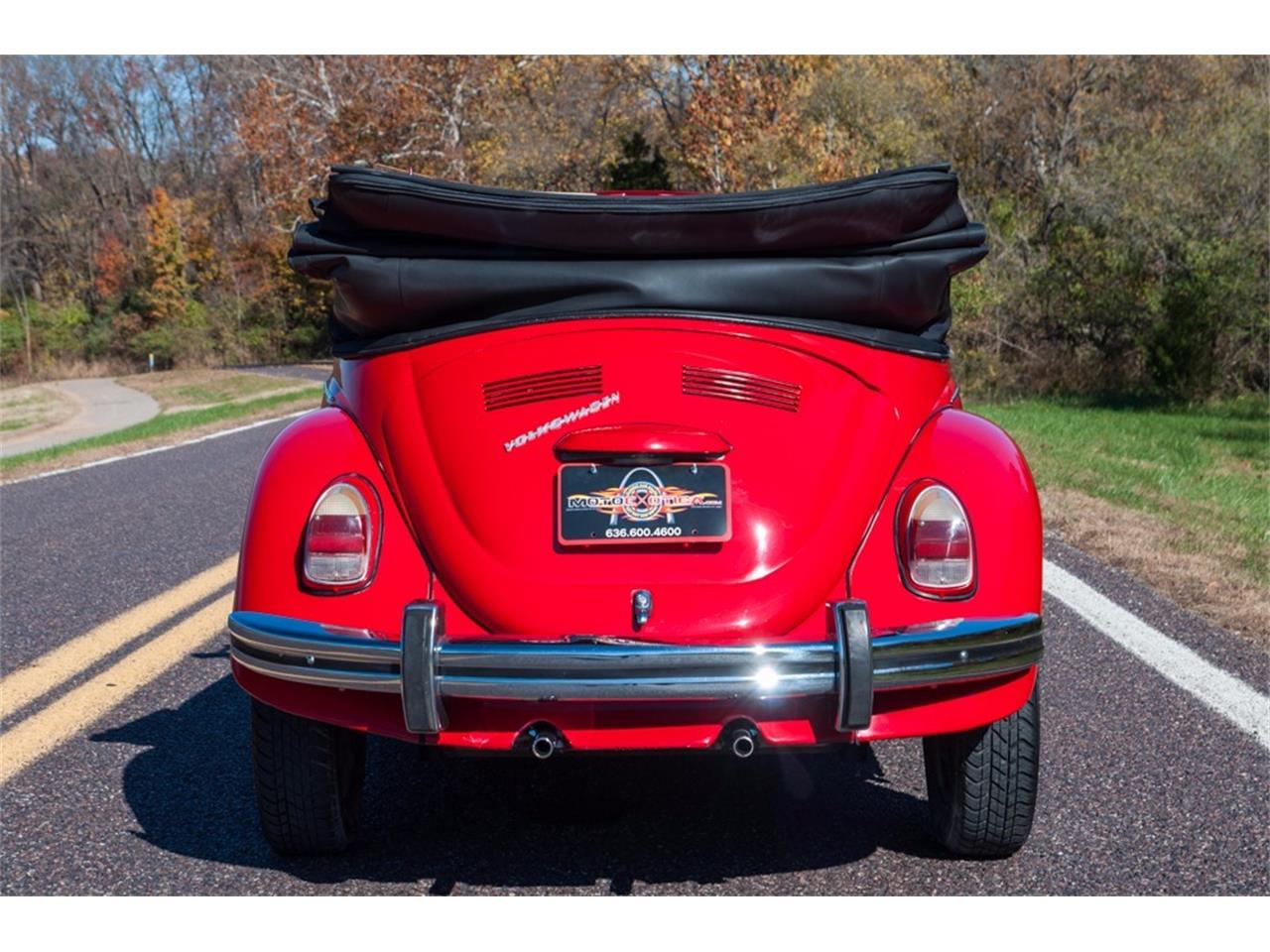 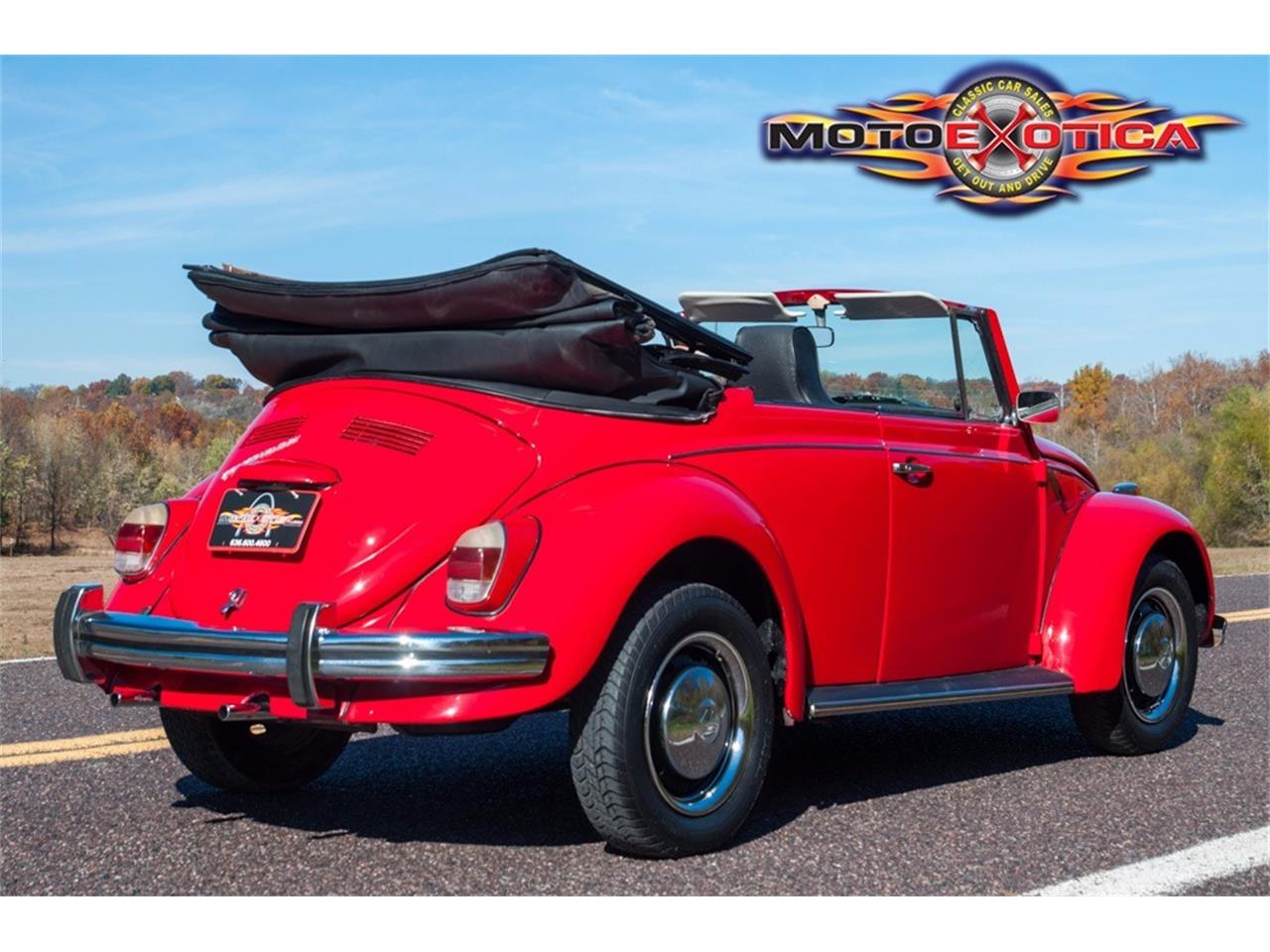 1968 Volkswagen Beetle Convertible Valour Red exterior with black soft-top and black leatherette interior 1500cc flat four-cylinder engine Four-speed manual transmission Hella headlights and VDO gauges Tidy undercarriage Beetle collectors, take heart because MotoeXotica Classic Cars has yet another classic 1960's Beetle convertible! - a 1968 Volkswagen Beetle Convertible finished in red exterior with a black interior and top. These classic Bugs are a blast to own andyou will get more thumbs up with an old bug than lots of other cars. Everyone has a bug story to share! Dressed in Valour Red, this Bug's paint and trim are in overall very good order, with blemishes visible upon close inspection on the passenger side. The windows are clear and intact and while the lights, including the Hella headlights, are in overall good shape. This Bug rides on factory steel wheels with caps surrounded by blackwall tires, size 165R15 at all four corners. The tires and wheels look good. The car's bodywork is solid and straight and the folding roof is in good order. The forward cargo bay is in very good shape and has a full-size spare tire. The engine bay is tidy and the bumpers fit very well to the car's body. In the rear is VW's bulletproof 1500cc flat four-cylinder buttoned to a four-speed manual transmission. Inside, the car's black leatherette interior complements the car's exterior. The high-back front buckets and rear bench seats are in great shape, the black carpet is in good order and the black instrument panel, with its VDO gauges, all look good but the fuel gauge is inoperable. The original two-spoke steering wheel is present and looks good with its metal horn ring but the horn is inoperable. The inner door panels, mirror glass and shift lever are all in good order. Completing the interior is a JVC AM/FM stereo with a cassette deck. Nineteen Sixty-Eight was a year of major change for the Beetle. The most noticeable of which were the new larger, higher mounted C-section bumpers. At the rear, new larger tail-lamps were adopted and were able to accommodate reversing lamps, which were previously separate bumper-mounted units. Beetles worldwide received the '67 North American style vertical headlamp placement but with replaceable-bulb headlamps compliant withECE regulationsrather than the US sealed beams. Other improvements were a new outside gas filler with spring-loaded flap, eliminating the need to open the trunk to refuel. The fuel gauge was integrated with the speedometer and was now electrically actuated rather than cable-operated. The spare tire now pressurized the windscreen washer, which was to be maintained at a pressure of 42psi. A pressure valve in the connecting hose closed airflow to the fluid reservoir if spare tire pressure fell below 30psi, which was above the recommended pressures for the road tires. A ventilation system was introduced, which drew fresh air into the cabin from louvers on the front decklid. For improved shifting, the shift lever was shortened, stiffened and moved rearward by three inches. A number of safety improvements were made in order to comply with the then-new American safety regulations: trigger-operated outside door handles, a secondary front hood latch, collapsing steering column, soft vent window latches, rotary glove compartment latch and instrument panel knobs labeled withpictographs. US models received a padded instrument panel that was optional in other markets. To meet North American head restraint requirements, VW developed the industry's first high-back bucket seat. Competition to this Volkswagen in 1968 included Chevrolet's Corvair. This car is currently located at our facility in St. Louis, Missouri. Current mileage on the odometer shows 11,787 miles. It is sold as is, where is, on a clean and clear, mileage exempt title. GET OUT AND DRIVE!!! Click here for our YouTube video of the Beetle! OR Please Copy &amp; Paste the Link Below to Watch the Video: www.youtube.com/watch?v=PTP_Km-ZhHM VIN: 1102977705 Note: Please see full terms and conditions listed below that pertain to the purchase of any said vehicle, thank you. 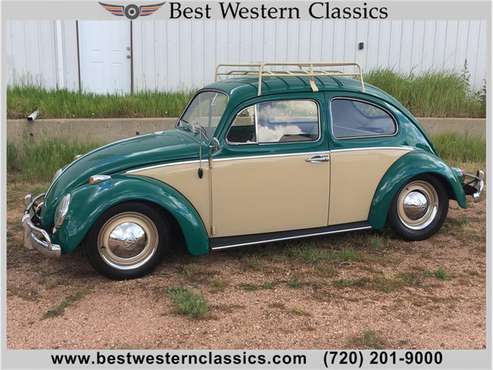 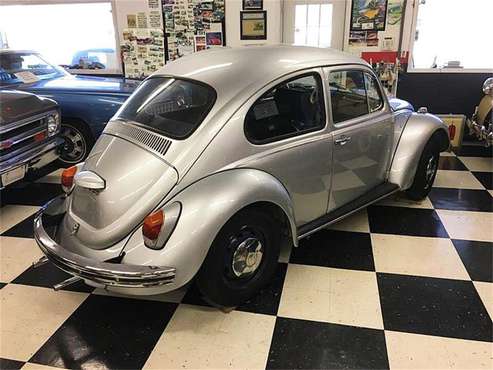 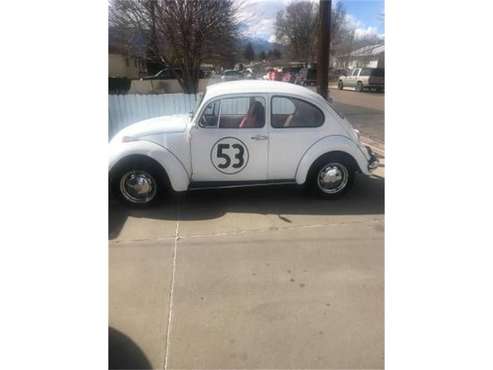 1970 Volkswagen Beetle in good running and driving condition. -Vehicle is on consignment and at our clients home -Please Call First and talk to a r... 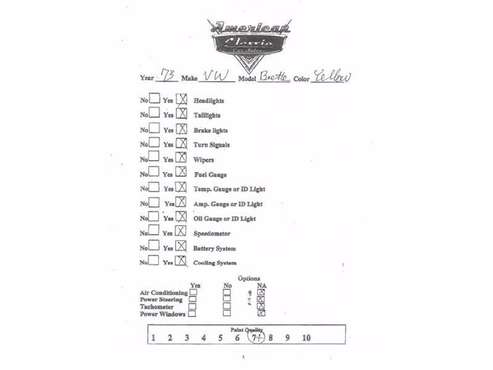 Looking for an almost perfect VW Beetle? Here's a sharp yellow package with tan cloth interior and immaculate from top to the undercarriage. A tigh... 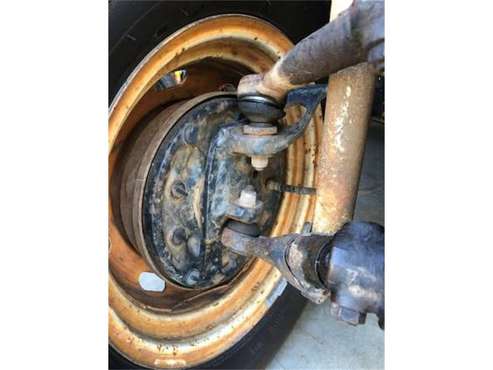