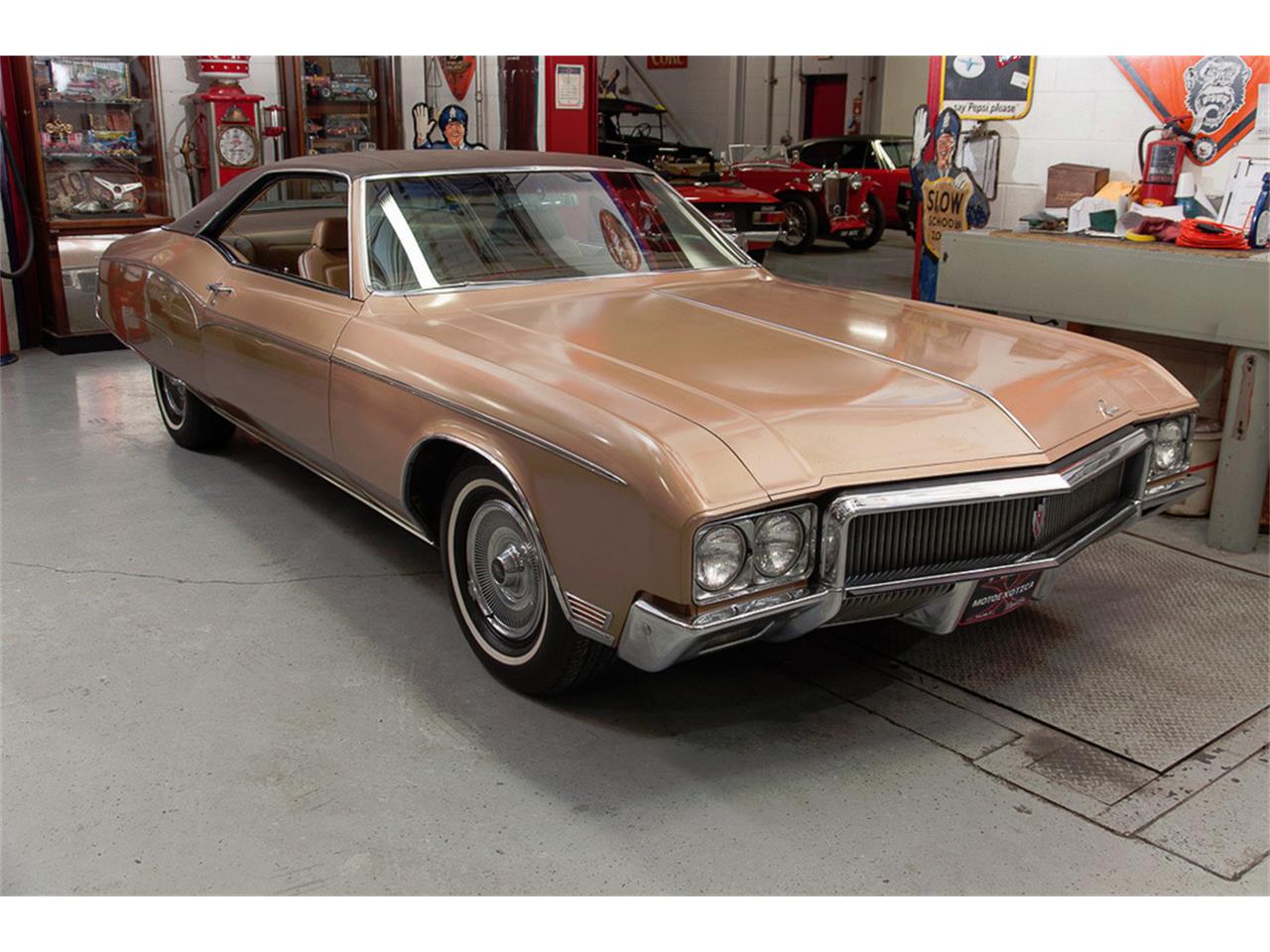 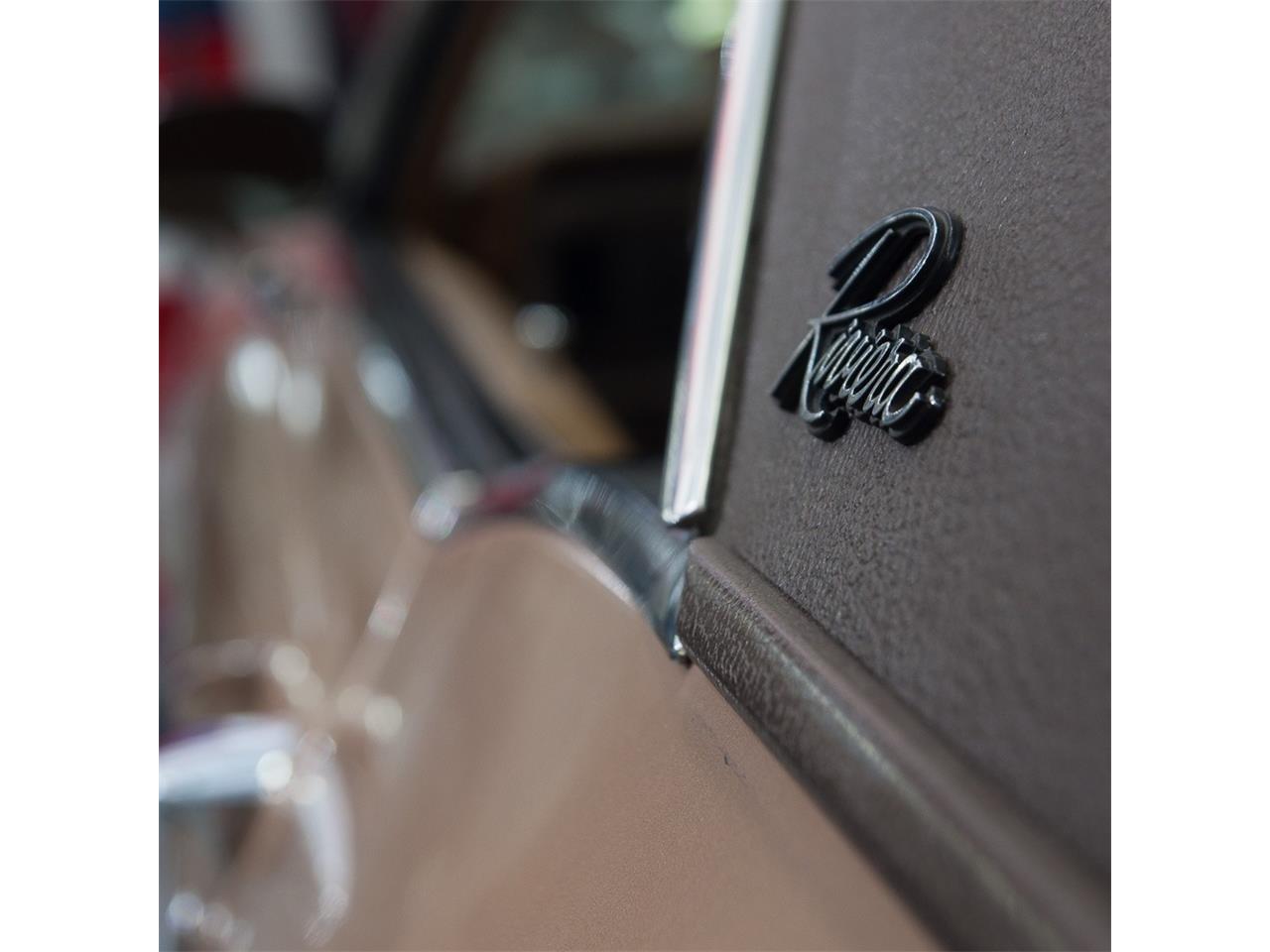 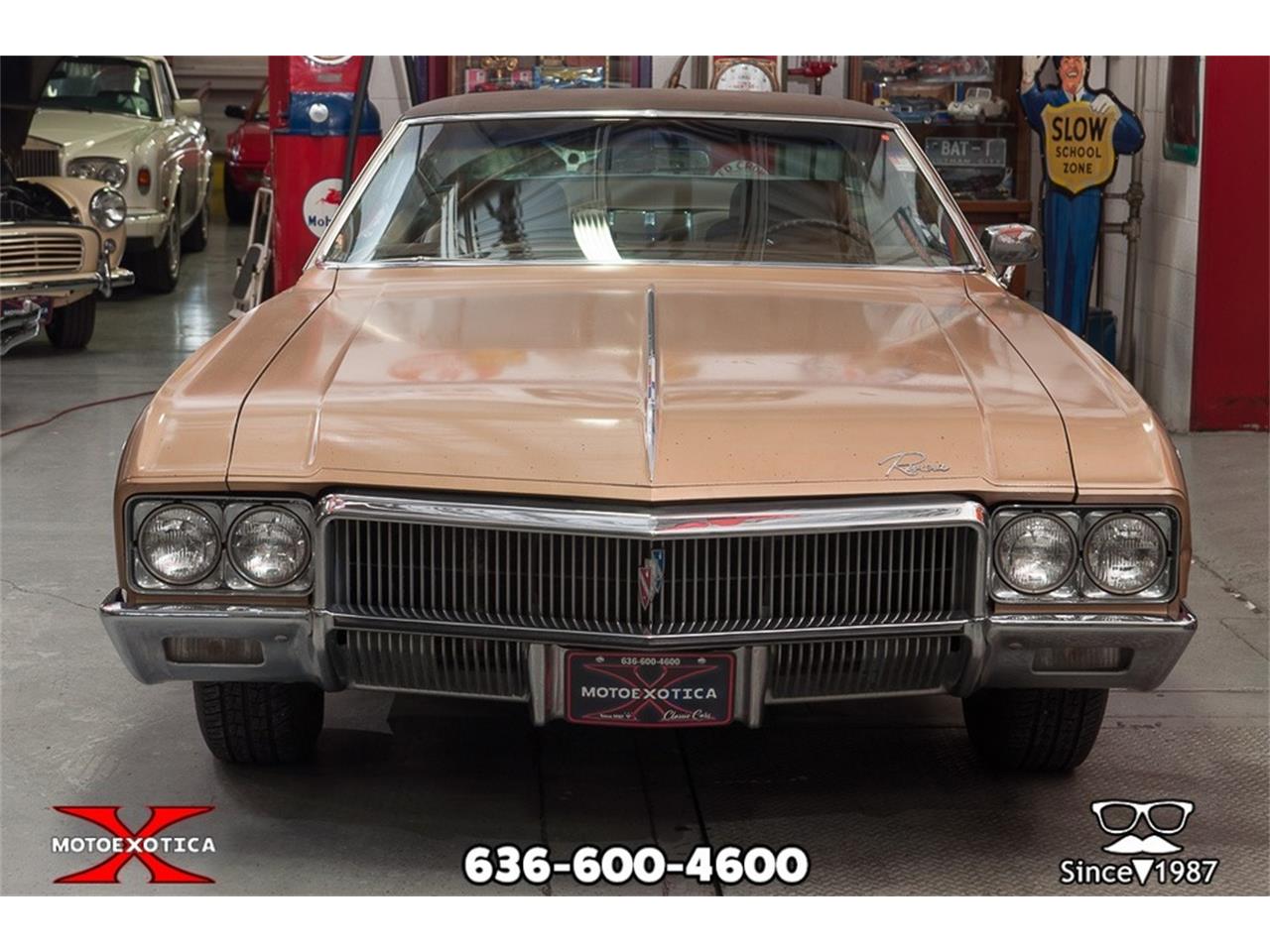 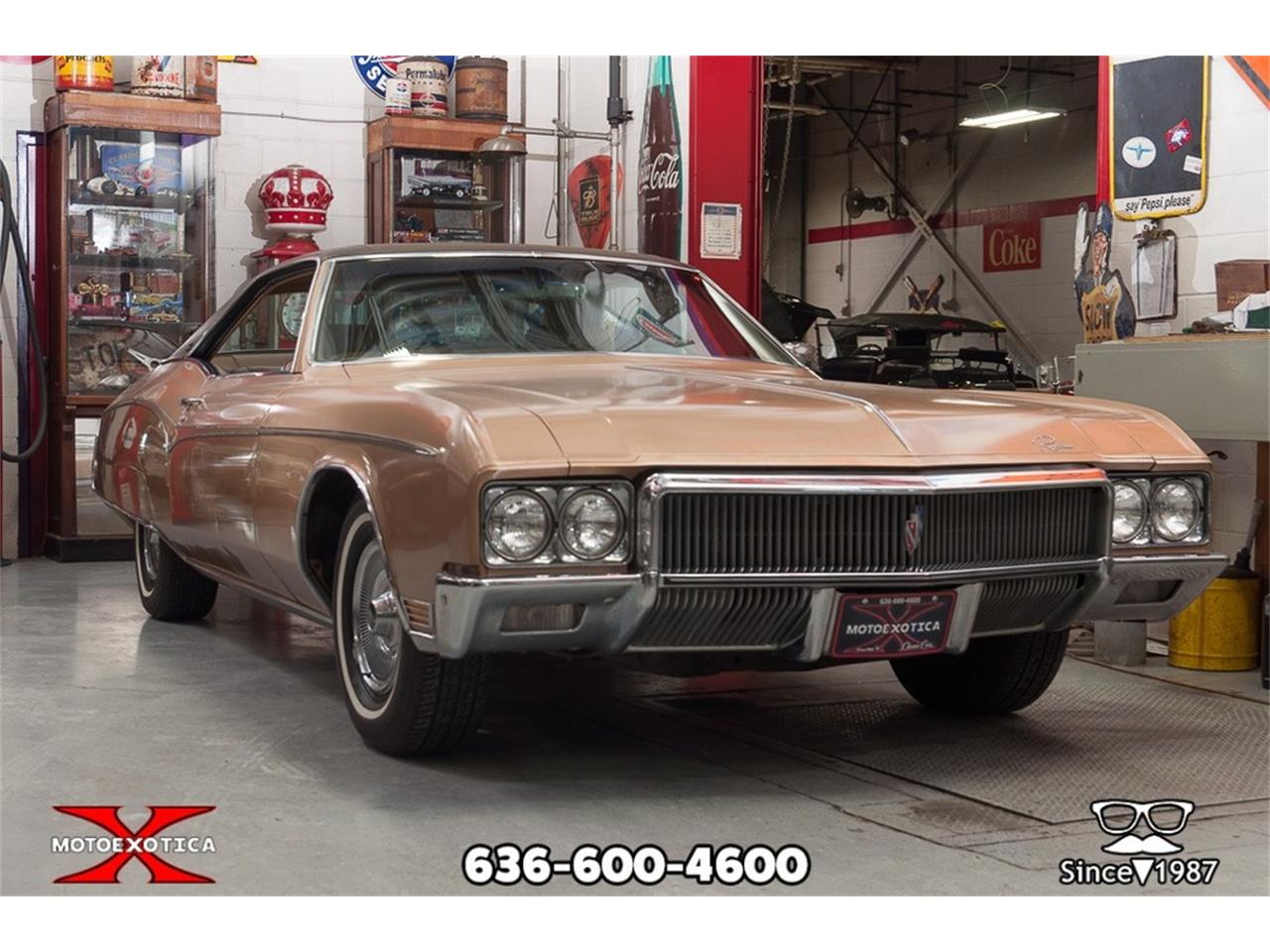 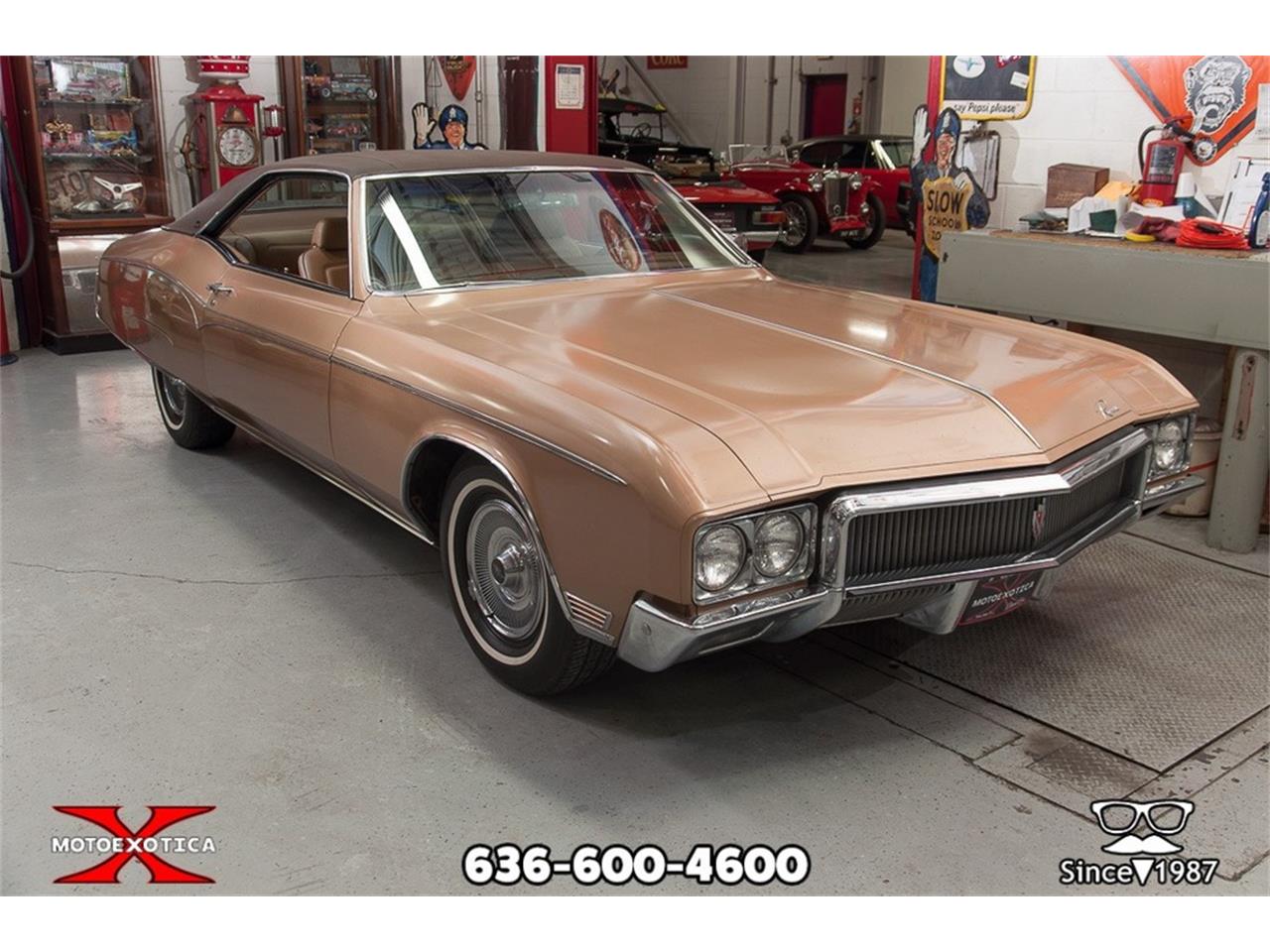 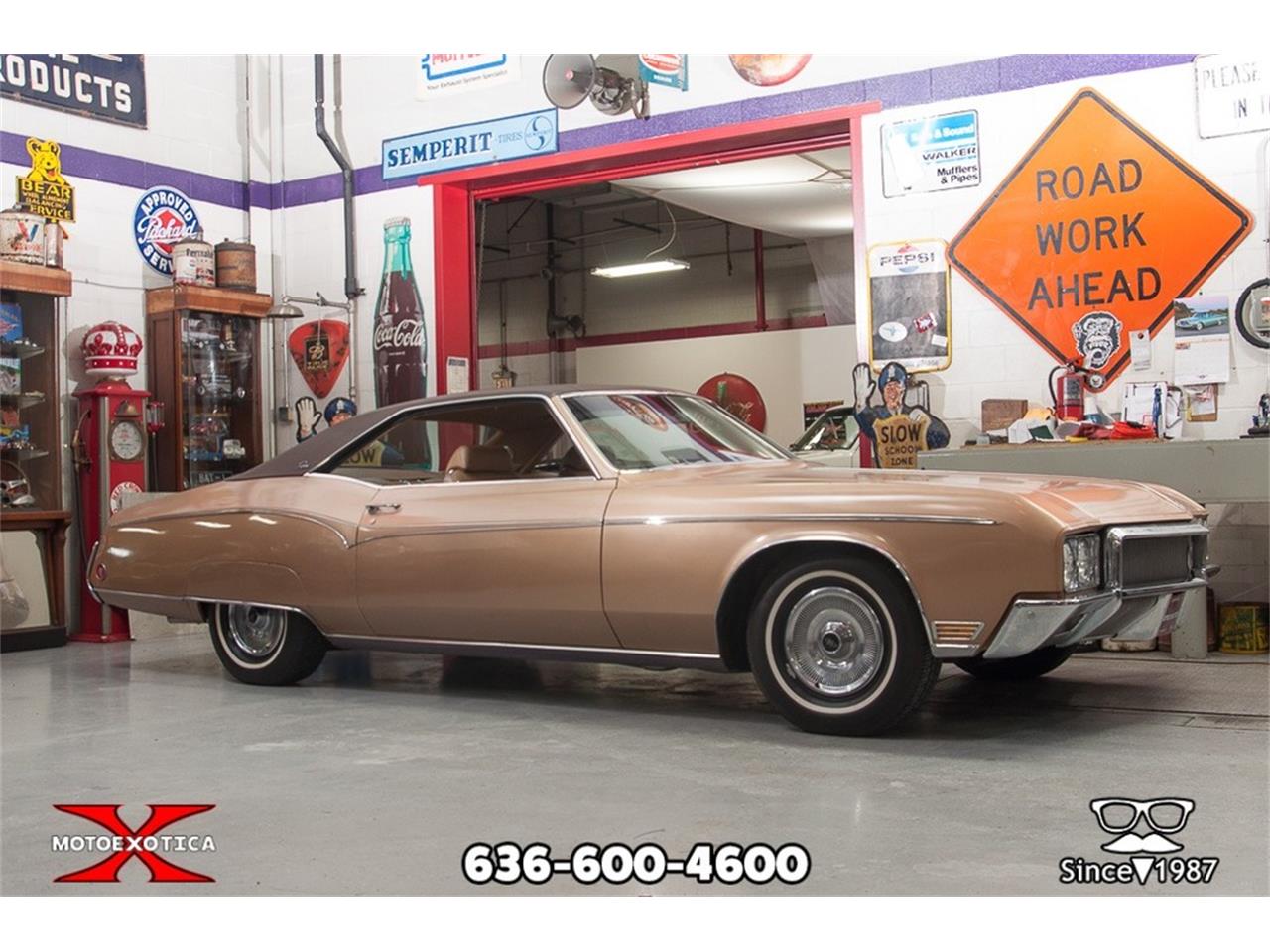 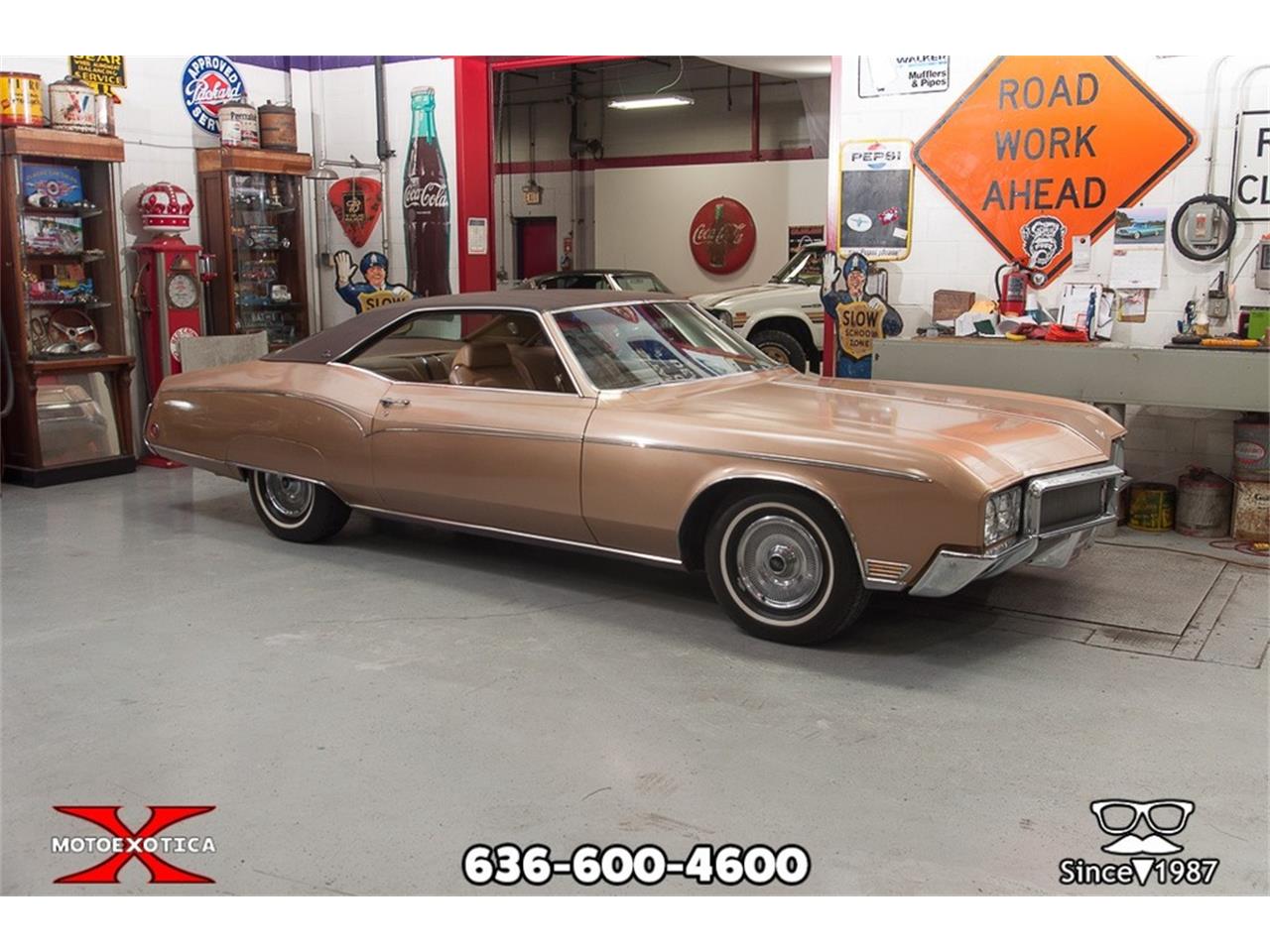 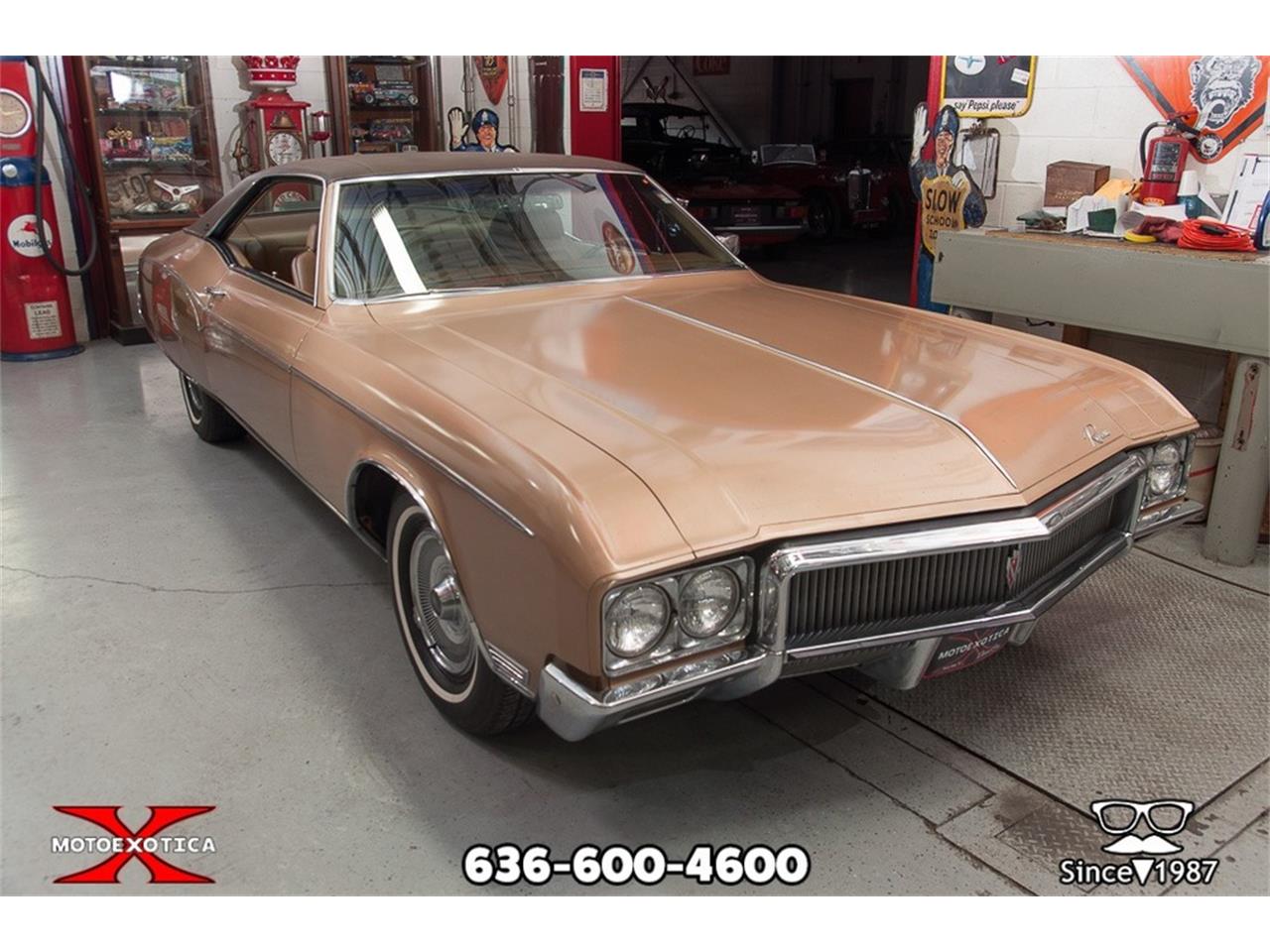 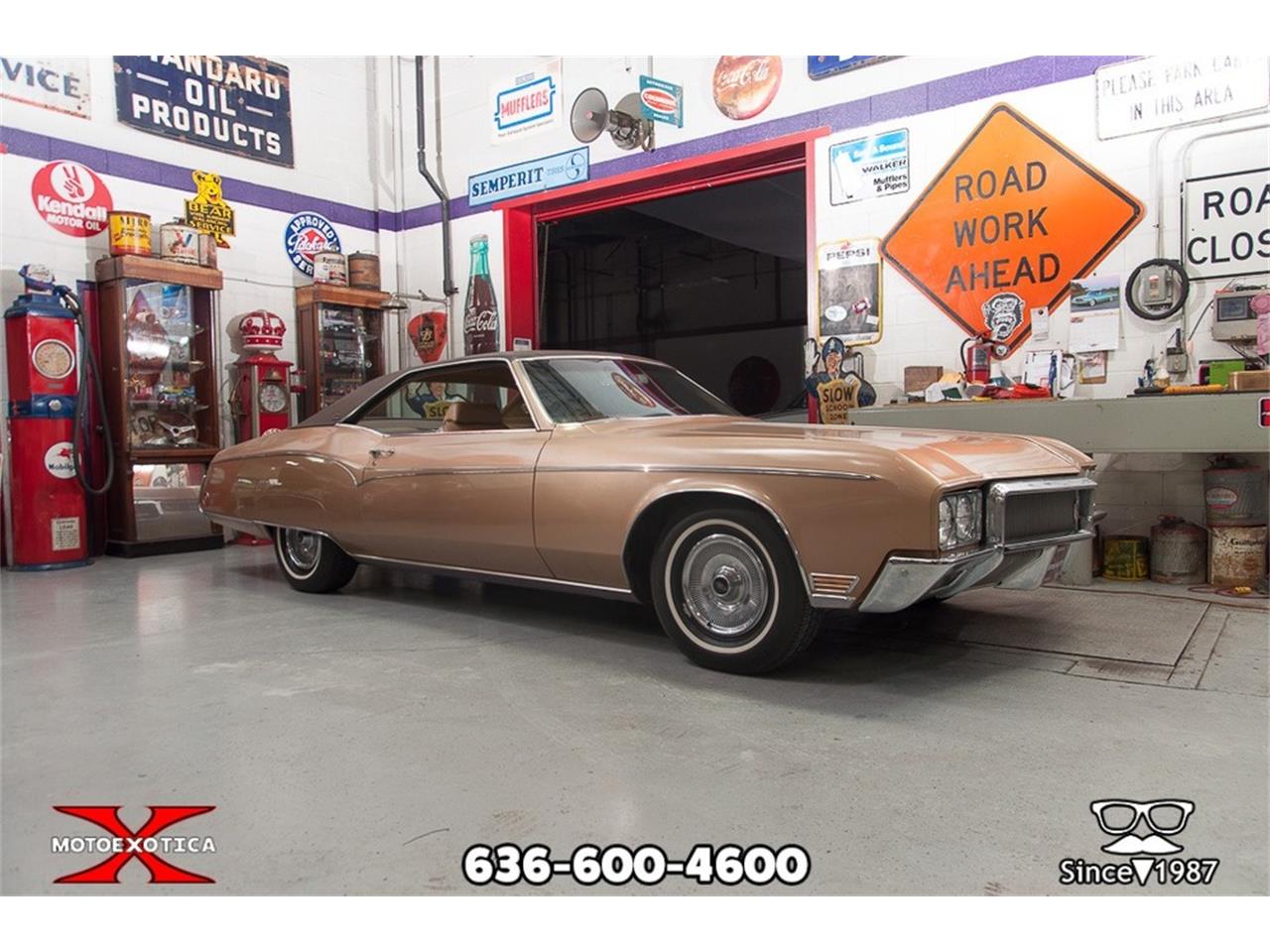 1970 Buick Riviera New Mexico Three-owner car; second owner was child of original owner Original survivor Buick; one of 37,366 Buick Rivieras made in 1970 Final model year of second-generation Riviera Matching-numbers Buick 455 CID V-8 with four-barrel carburetor Super Turbine 400 three-speed automatic transmission and 2.78:1 gearing Desert Gold Metallic exterior (code 63) with custom full, vinyl roof (code 2) Original Saddle interior (code 686) Fully loaded - air-conditioning, power steering, power brakes, six-way power front seats, power windows, cruise control, tilt steering column, tinted glass and driver's side remote sideview mirror New exhaust system and floor mats Working original T-3 headlights Documentation includes copies of the original dealer purchase agreement and cash receipts journal Own this Vehicle from $309 per month-call 636-600-4600 Fast with Class is what this ride's all about. MotoeXotica Classic Cars is pleased to present this survivor Buick Riviera; a three-owner car that is fully loaded and in good, original condition. Previous owner stated mileage to be original at 75,000 but the title states not actual due to age. Made in Buick's Flint, Michigan (VIN code H) factory during the second week of October 1969, this example was sold by Reynolds Buick, Inc., in West Covina, California on February 26, 1970. A lady, Anita H., was the car's original owner. The car came equipped with the following options - AM radio, rear speaker, Road-Handling, air-conditioning, heavy-duty cooling, power six-way front seats, power windows, mirror map lights, deluxe wheel covers, cruise control, Soft-Ray Tinted Glass, driver's side remote control sideview mirror and custom vinyl top. Curiously, Anita requested the car's AM/FM stereo radio and chrome wheels to be removed. By the way, Reynolds Buick, Inc. is still in business; it has been since 1915. Now, the Desert Gold Metallic (code 63) paint and trim, including the full, black vinyl roof (code 2), are in good, original condition but the paint does show some age with some chips. The car's bodywork is straight and solid, including the 1970-only rear fender skirts, the car's engine bay is tidy and the chrome bumpers are in good, original order. This car sports BFGoodrich The Advantage Plus whitewall tires, size 225/75R15, topped with deluxe wheel covers. The tires are in very good order while the wheels are in good, original order. Under the hood is a matching-numbers Buick 455 CID V-8 engine with four-barrel carburetor. Backing the motor is a Super Turbine 400 three-speed automatic transmission and a 2.78:1 rear end. The car has a new exhaust system and floor mats plus operational original T-3 headlights. Inside, the car's original Saddle interior (code 686) in good overall order, from the six-way power front seats, to the darker, contrasting carpet, the Saddle headliner, the two-spoke steering wheel, to the inner door liners and original instrument panel but the horn is inoperable and the power seat is inoperable at forward and reverse. That factory AM radio Anita H. requested is still in the dash. The 1970 Riviera was restyled. Exposed quad headlamps were nearly flush-mounted, while the new front bumper wrapped around and over the new vertical bar grille, set between the headlamp pods. A newly optional side trim feature accented the large coupe's flowing lines. Skirted rear wheels became standard, with exposed wheels an option. At the rear, a new rear bumper/taillight motif was seen. The engine was upgraded to 455 CID, the largest engine Buick offered to date, rated at 370 horsepower gross, 245 horsepower net and more than 500 lbs�ft of torque. Competition to this Riviera in 1970 included AMC's Ambassador SST Coupe, Buick's own Wildcat and Electra 225 coupes, Cadillac's Coupe de Ville and Eldorado, Chevrolet's Monte Carlo, Chrysler's 300-H, New Yorker and Newport coupes, Dodge's Monaco and Polara coupes, Ford's Thunderbird, Lincoln's Continental Coupe and Mark III, Mercury's Marauder and Marquis coupes, Oldsmobile's 98 Holiday Coupe and Toronado and Pontiac's Bonneville and Executive Hardtop and Grand Prix coupes. Documentation includes copies of the original dealer purchase agreement and cash receipts journal. In 1970, a Buick Riviera was another sign that you'd "arrived," that you had made it "to the top." Personal luxury cars and two-door coupes neared their sales zenith (especially compared to today's market) and would continue to proliferate up to and beyond the first Arab Oil Embargo of 1973. If you're in the market for one of the original few vehicles to populate the personal-luxury class, you owe it to yourself to stop by MotoeXotica Classic Cars and inspect this Riviera for yourself. VIN: 494870H917729 This car is currently located at our facility in St. Louis, Missouri. Current mileage on the odometer shows 75,600 miles. It is sold as is, where is, on a clean and clear, mileage exempt title. GET OUT AND DRIVE!!! Please Copy &amp; Paste the Link Below to View our YouTube Video: https://youtu.be/T7zTOlN8MTA Note: Please see full terms and conditions listed below that pertain to the purchase of any said vehicle, thank you. 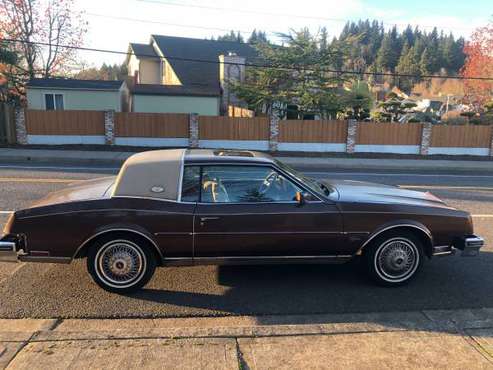 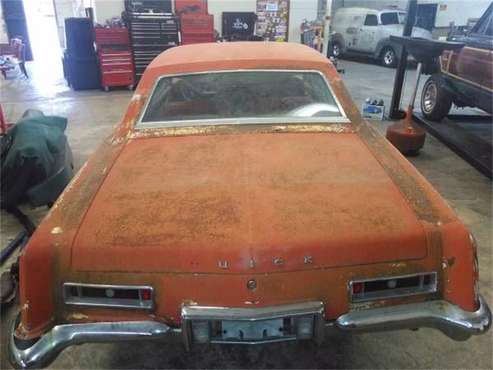 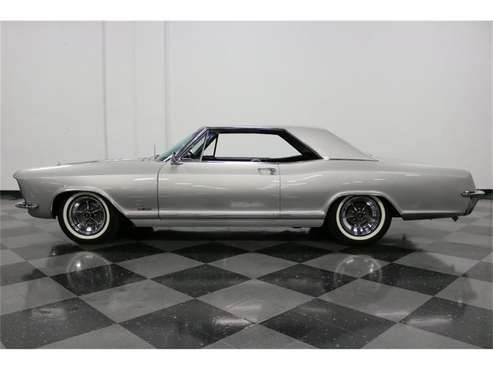 1965 was the final year before Buick introduced a redesigned Riviera. It was met with questionable changes. However, what this did was create a very desirable collector car. And there is no denying it, Buick '63-65 Rivieras are red hot right now, ... 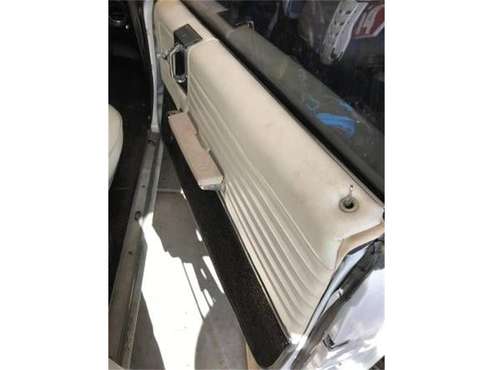 1966 Buick Riviera Nice classic car! Engine and transmission have been rebuilt. Have original wheels and other parts. Needs some TLC but it could very easily be a show car once again! Please Note The Following **Vehicle Location is at our clients ... 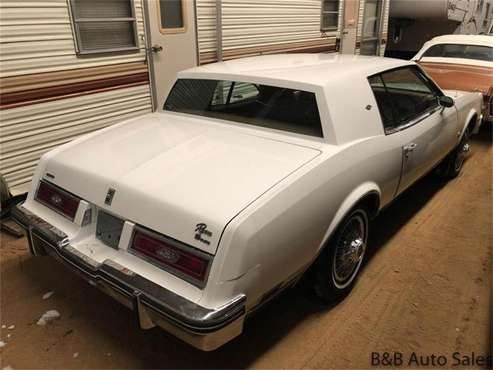 This S type Riviera ia an original car except for one repaint. It shows 84,000 miles which according to the previous owner are original. MECHANICAL- It is powered by a 3.8 turbo V6 with automatic transmission. INTERIOR- The leather seats are in gr... 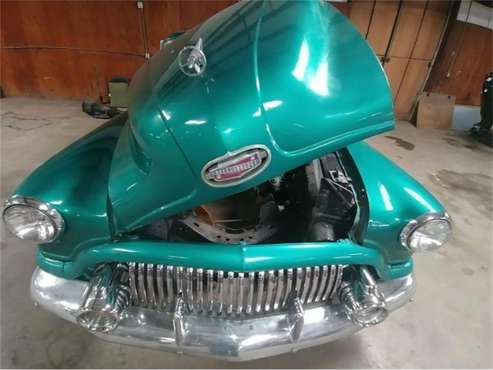 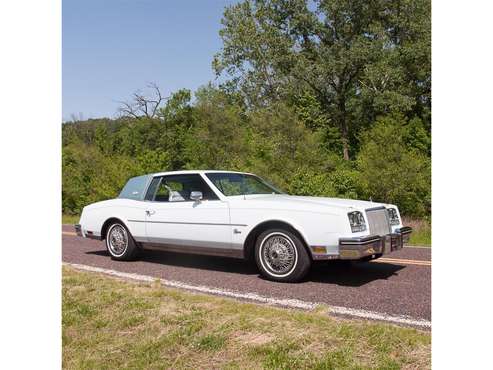 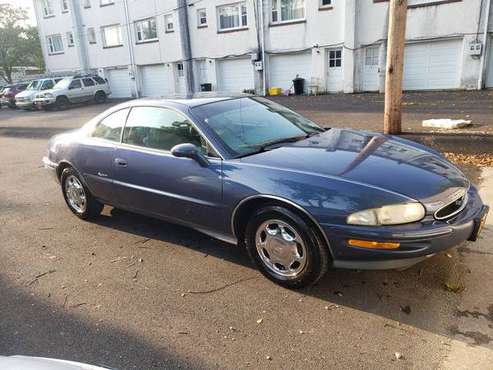 Super clean 96 Riviera. Low miles- 82,763. Miles may rise a little as it is driven a few times a week. New tires. Comes with MANY extra parts. Aftermarket Alpine Radio. Current NYS inspection. We are asking $3,500 may be willing to negot...