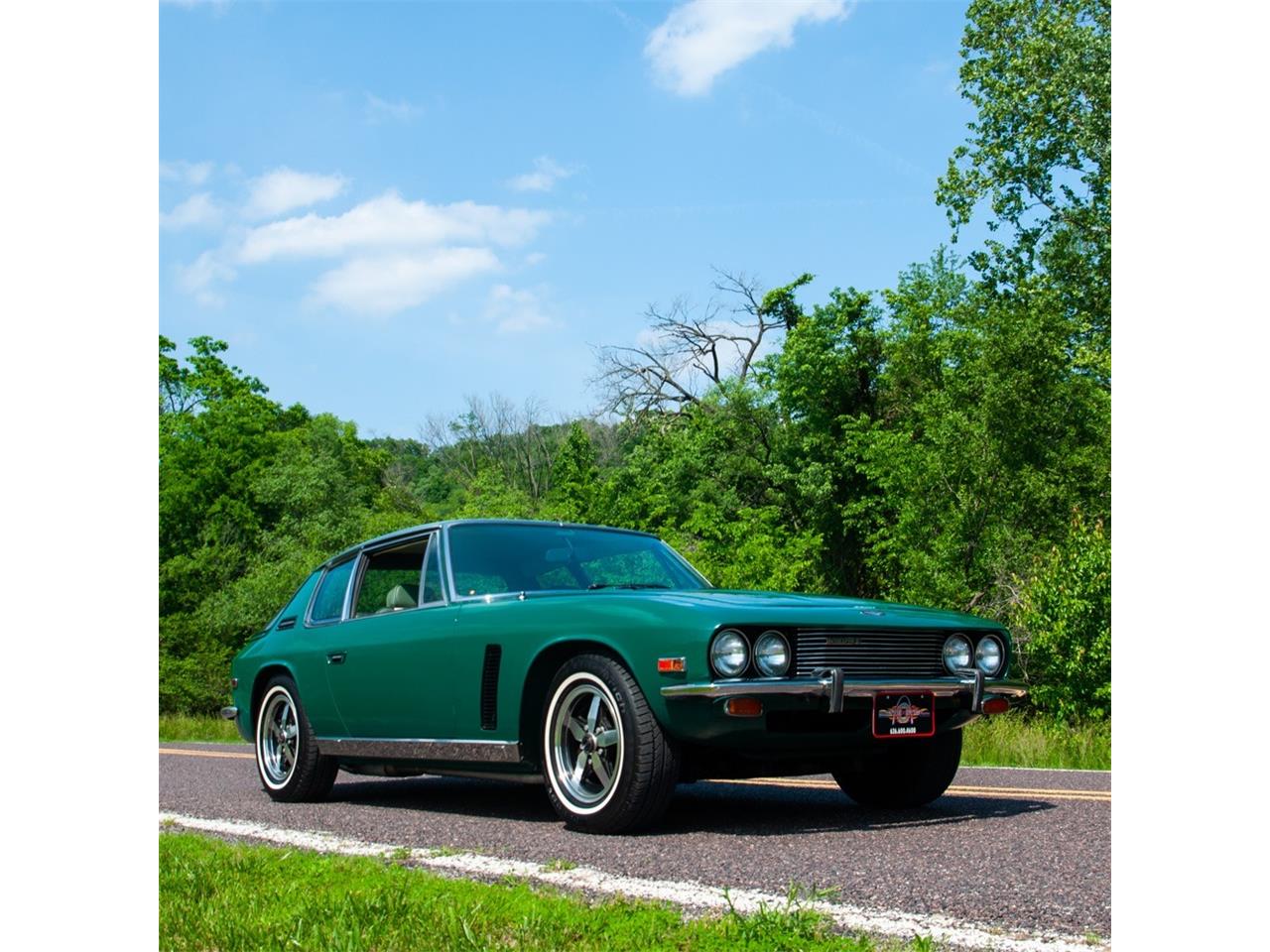 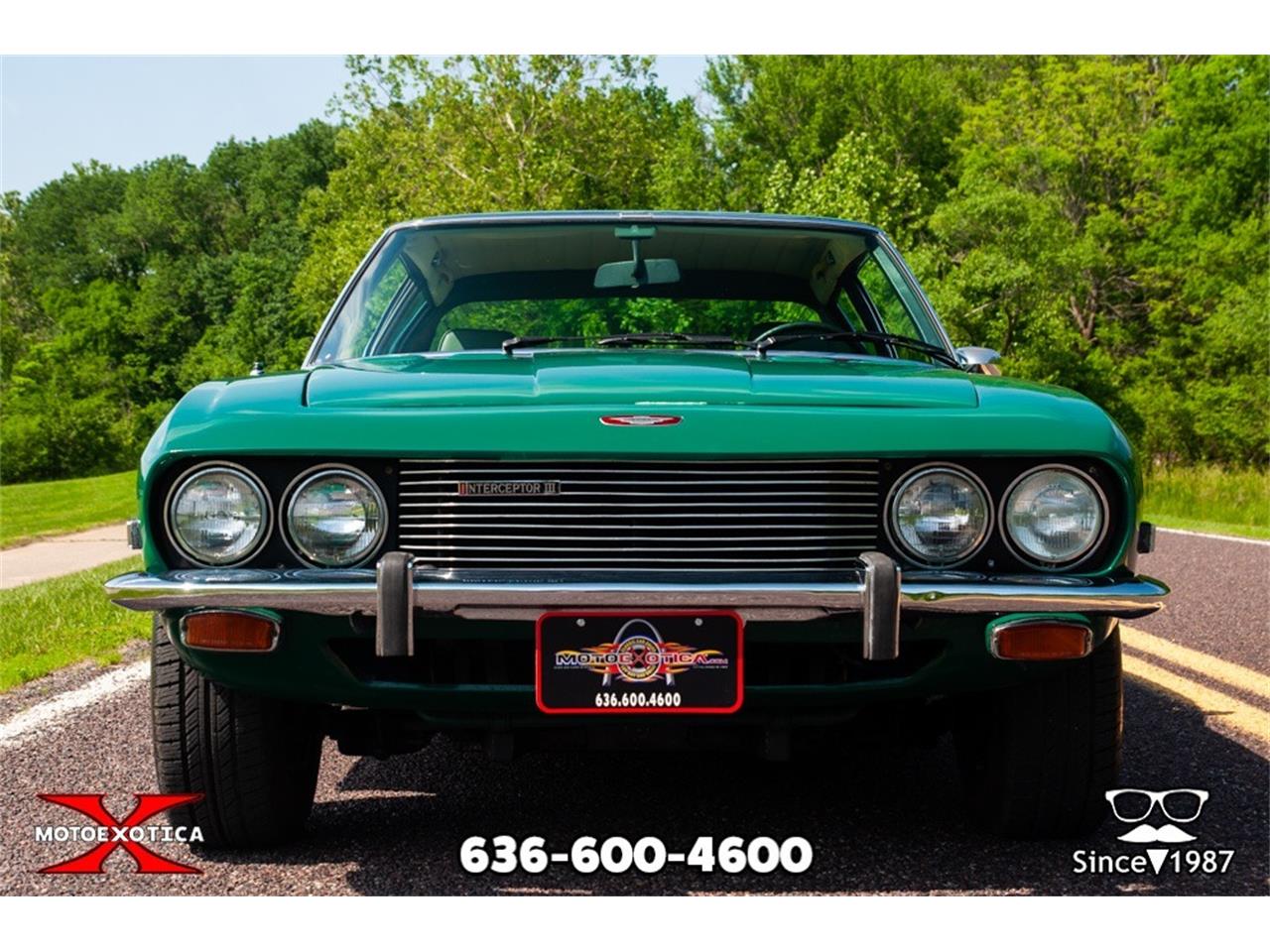 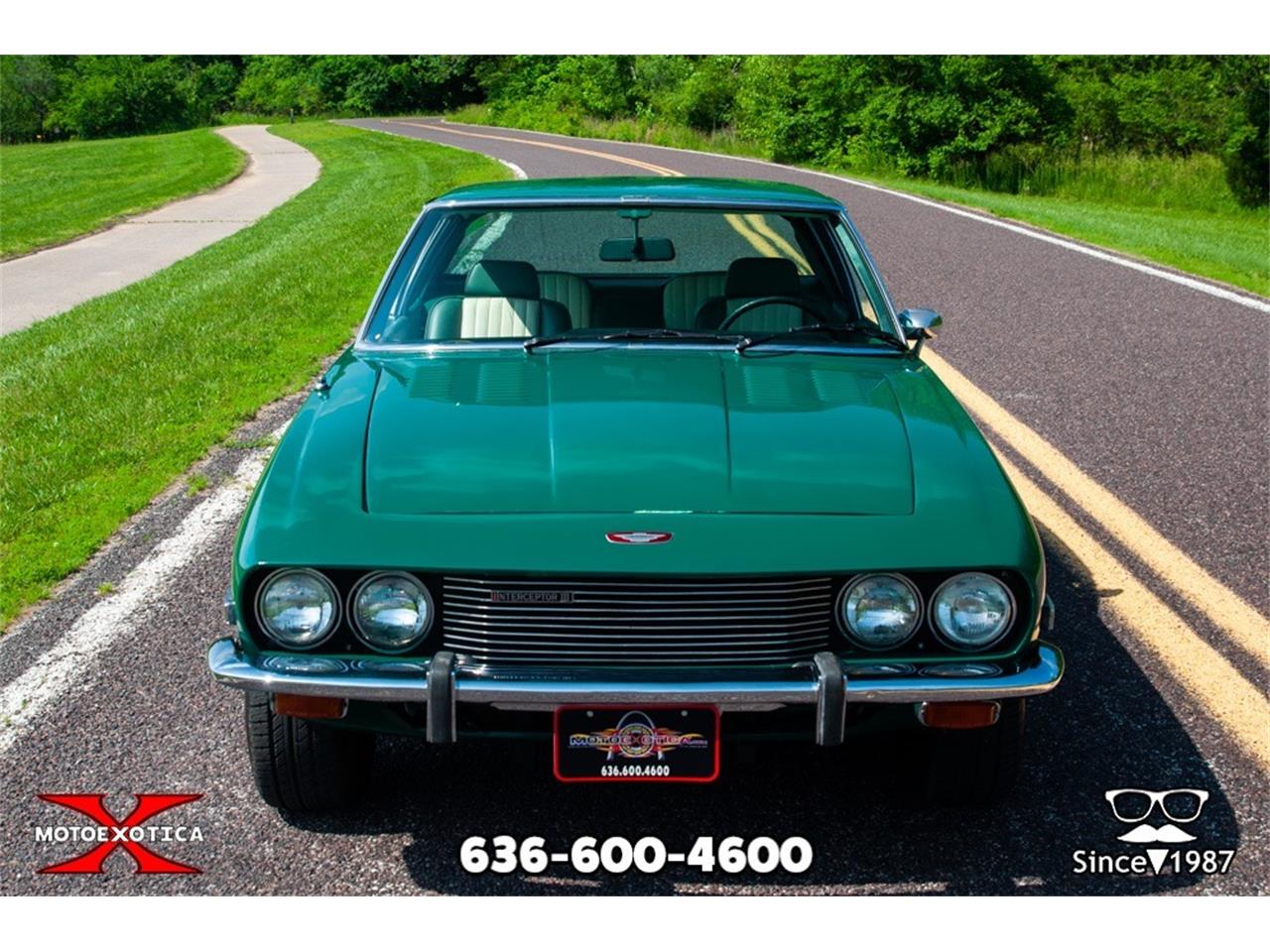 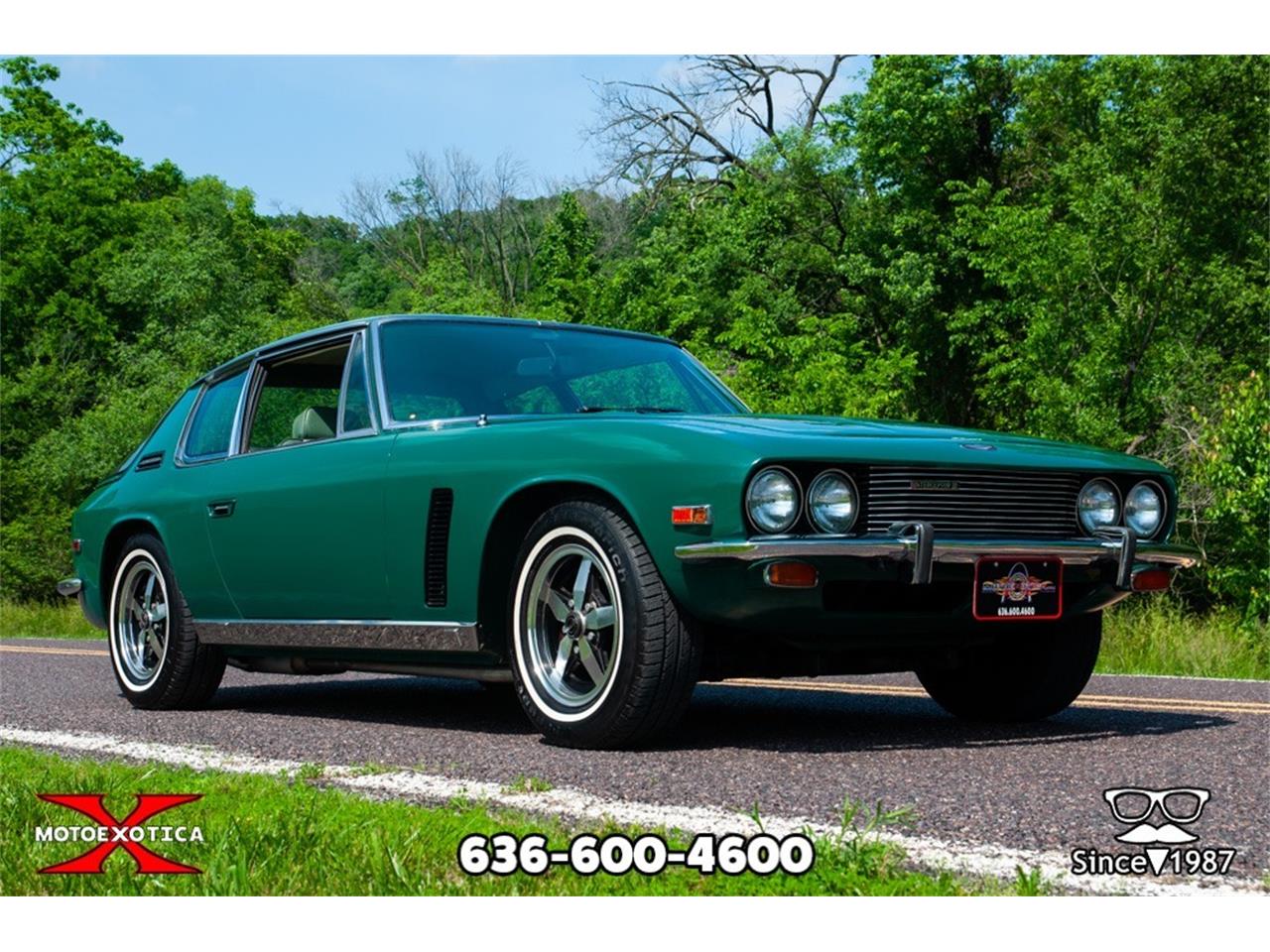 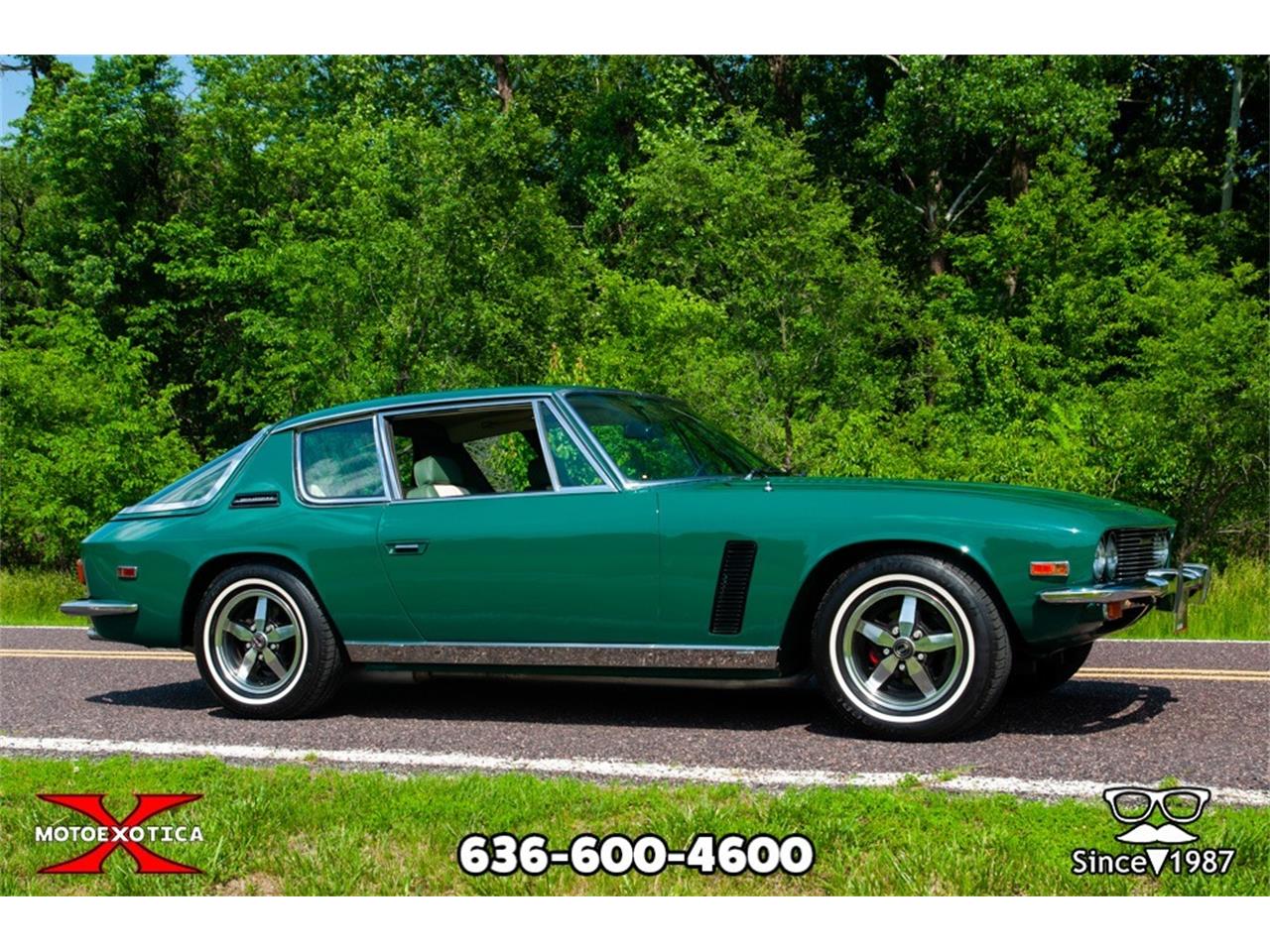 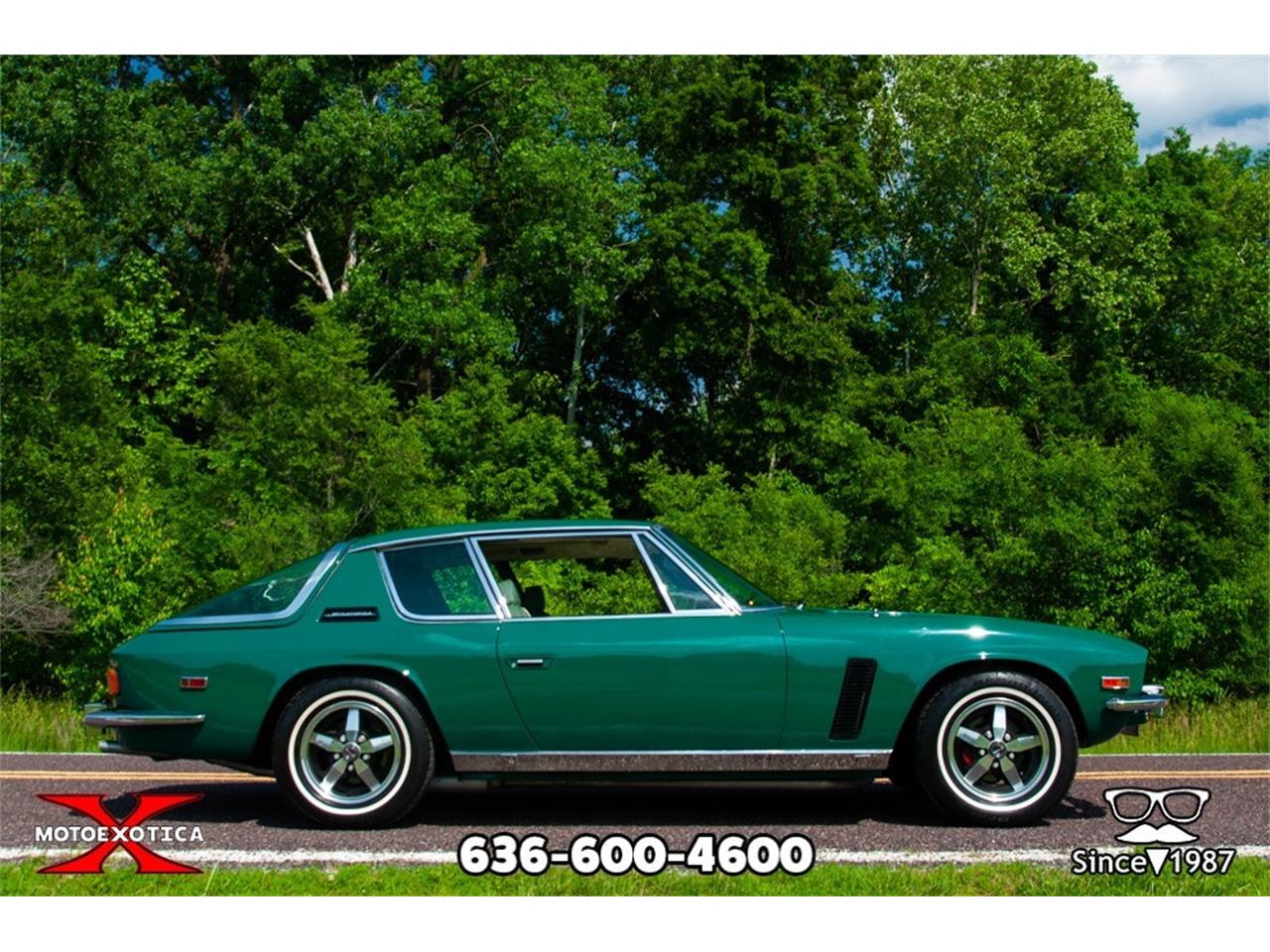 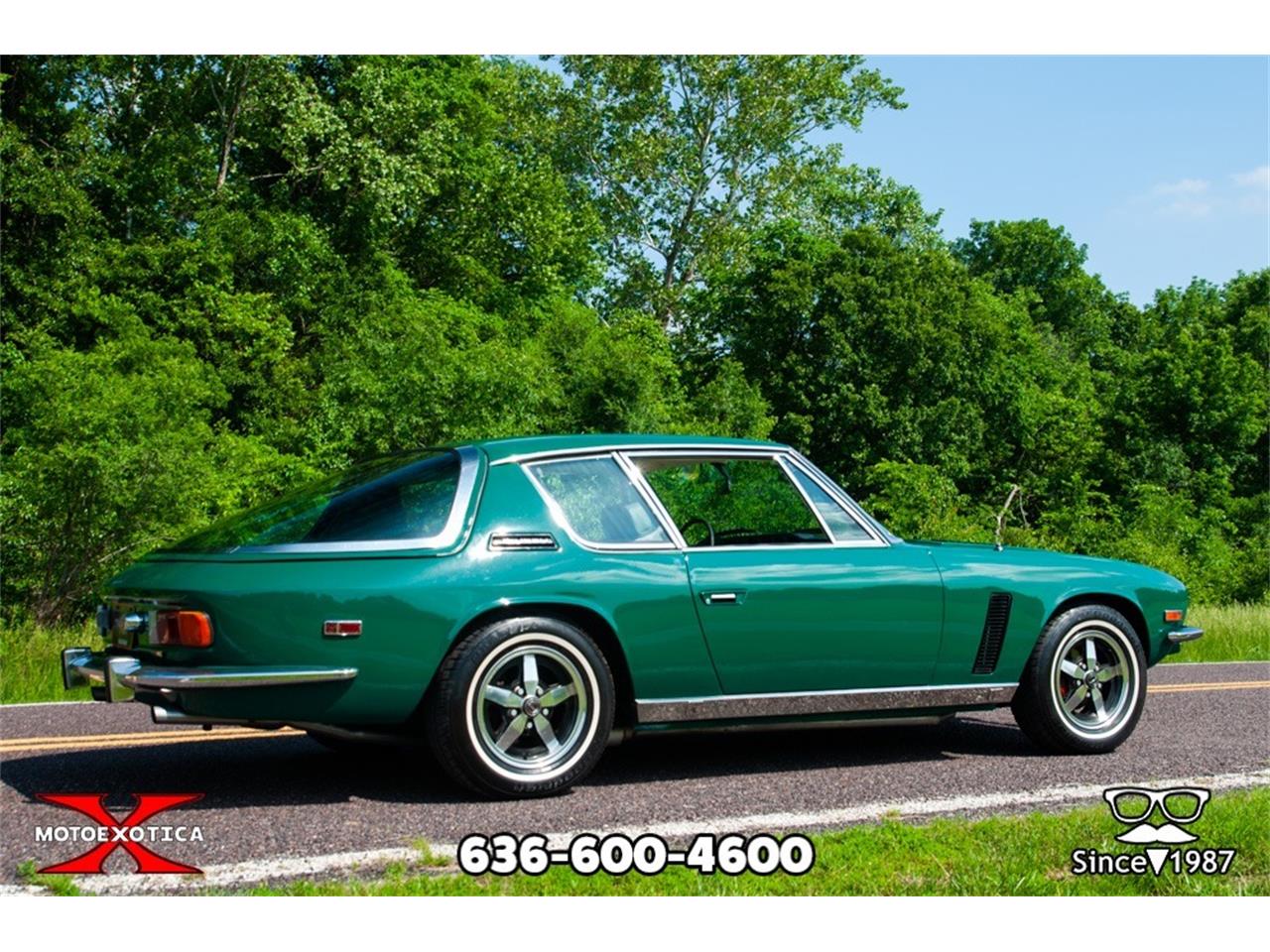 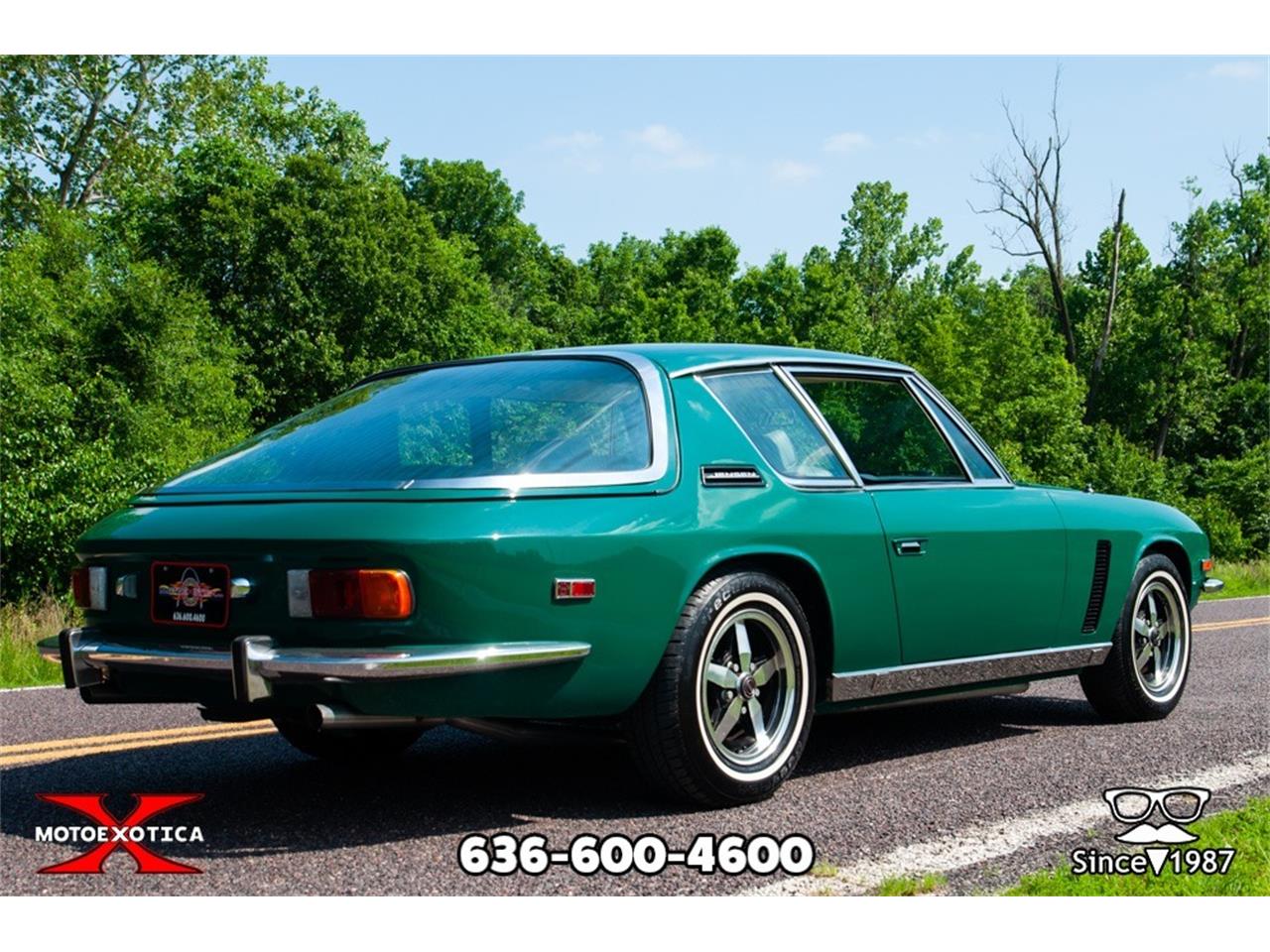 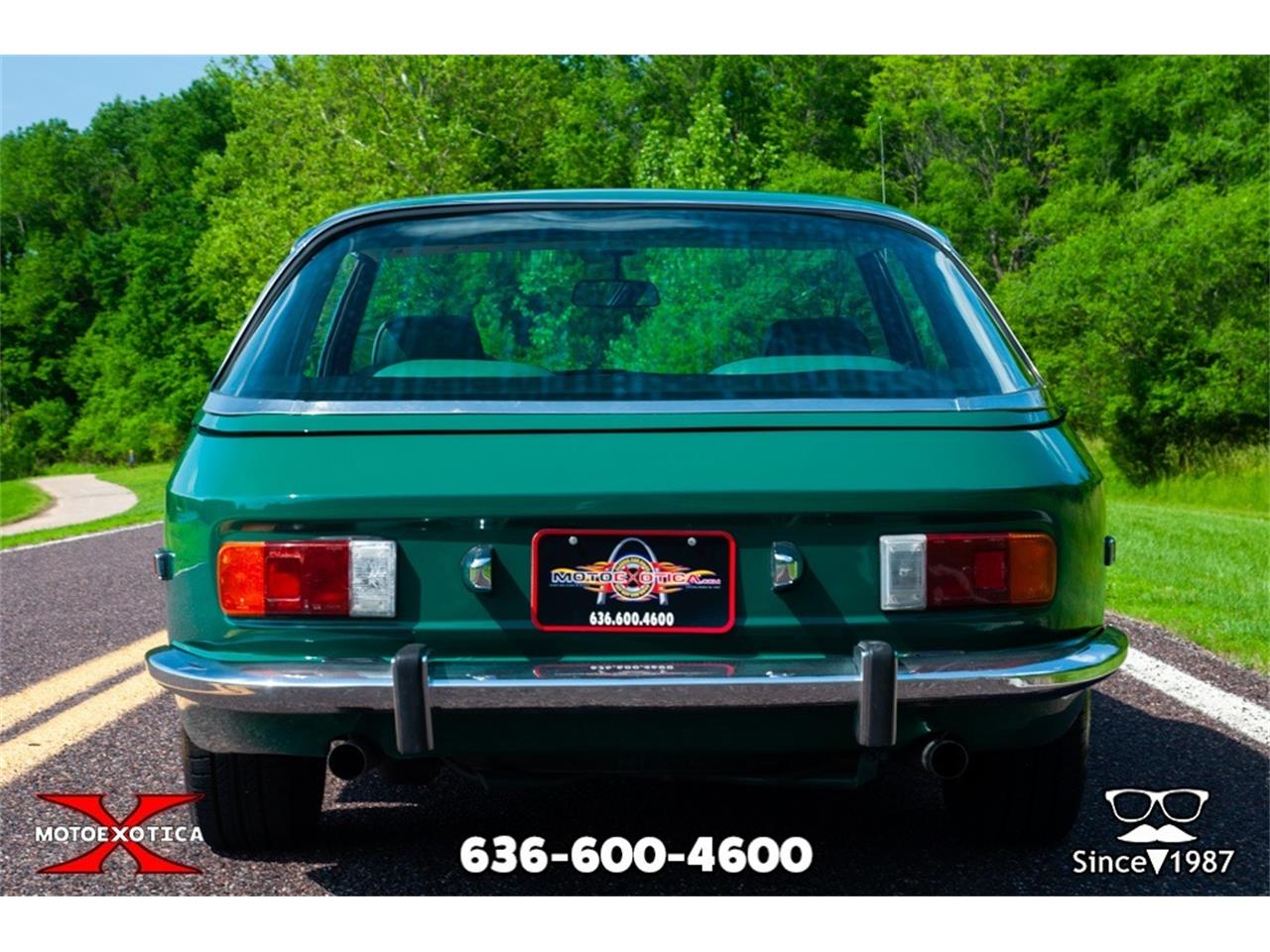 1974 Jensen Interceptor Mk. III Seldom-seen British hybrid import powered by American big block power! 1 of 843 examples sold in the United States in 1974 1 of 1,080 units sold worldwide in 1974 1 of 1,251 units sold worldwide with this engine 440 CID Chrysler V-8 engine Torqueflite A727 three-speed automatic transmission British Racing Green exterior with green and platinum Connolly leather interior Air-conditioning, power steering, power brakes Period correct Guest, Keen and Nettlefolds alloy wheels Own this Vehicle from $579 per month-call 636-600-4600 MotoeXotica Classic Cars is very pleased to present one of the rarer American powered British hybrid imports from the 1970s, a 1974 Jensen Interceptor III. This example was built in December 1973 at the Kelvin Way Factory in West Bromwich, near Birmingham, England. This awesome Interceptor comes from the southern state of El Paso, Texas and then to a Chevy dealer in Battle Creek Michigan. Finished in British Racing Green, appropriately enough, this Anglo auto's paint and trim are in overall excellent condition. Minor blemishes are noted on the hood and cowl. The windows, including the compound curved rear hatch with its electric grid defroster are clear and crack-free. The cars lights are in very good order. This Jensen's bodywork is straight, its engine bay is tidy, the battery looks good and the cargo area is in fine order. The car's chrome bumpers look great and fit tightly to the body and this Jensen rolls on whitewall radials, size 215/70R15 at all four corners. Each tire wraps around a five-spoke GKN alloy wheel. Flip open the forward-hinged hood and you'll see something surprising yet very familiar - a Chrysler 440 CID V-8 engine that has recently been tuned. Backing that big-block beast is a Torqueflite A727 three-speed automatic transmission. Driver convenience features include air-conditioning, power steering and power brakes. Inside, open the door and the rich leather aroma fills the air and the car's green and platinum Connolly leather seats look fantastic, as does the complementing green Wilton wool carpet and contrasting light green headliner. The original two-spoke steering wheel faces the driver and the instrument panel, with its full array of ancillary gauges canted to face the driver, is in very good order. The center console features woodgrain trim for some added warmth and is in very good order. The air conditioning is inoperable but complete. While there is an AM/FM stereo with a CD player, it's not a Jensen; it's a Sony. Carrozzeria Touring of Italy designed the Interceptor and it may have taken some styling cues from theBrasinca Uirapuru,with its distinctive large, curving wrap-around rear window that doubled as atailgate. Some people might glimpse some Citroen DS motifs, too. The original Jensen specifications included electric windows, reclining front seats, a wood-rimmed steering wheel, radio with twin speakers, reversing lights and an electric clock.Power steeringwas included as standard from September 1968. The Mark III, introduced in 1971, revised the front grille, headlamp finishers and bumper treatment again. It had GKN alloy wheels and air conditioning as standard, and revised seats. It was divided into G-, H-, and J-series depending on the production year. The big block 440 V-8 superseded the 383 V-8 in 1971. For 1974, the car received minor changes - a restyled steering wheel, a rheostat added to the instrument lighting and the radio's on/off switch controlled the power antenna. Competition to this Jensen in 1974 included AMC's Javelin, Chevrolet's Camaro, Dodge's Challenger, Plymouth's Barracuda, Pontiac's Firebird and Porsche's 911. If this car intrigues you, you owe it to yourself to visit the MotoeXotica Classic Cars showroom in person to check it out. You are not likely to see another one at any cruise night or car show you attend. VIN: 22109302 Engine #: 4C 12205 Engine Date 8 • 3 • 2 This car is currently located at our facility in St. Louis, Missouri. Current mileage on the odometer shows 41,234 miles. It is sold as is, where is, on a clean and clear, mileage exempt bonded title. GET OUT AND DRIVE!!! CLICK HERE TO VIEW OUR YOUTUBE VIDEO!! ORCopy &amp; Paste the Link Below to Watch the Video: https://youtu.be/LBmUL_G-Pnk Note: Please see full terms and conditions listed below that pertain to the purchase of any said vehicle, thank you. 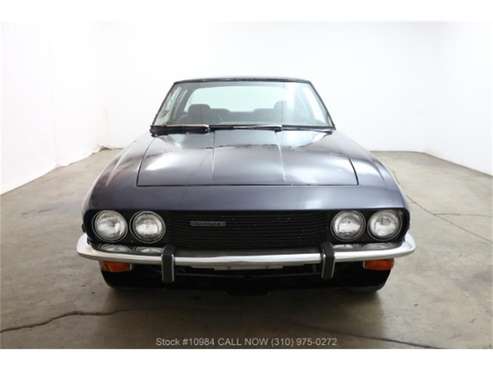 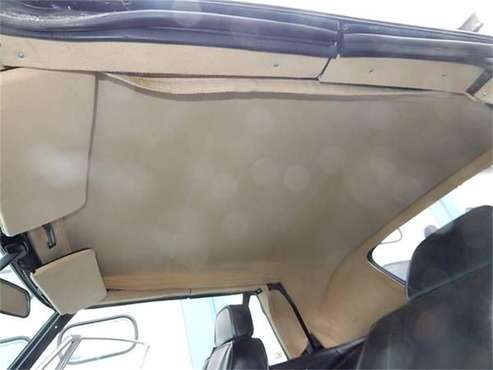 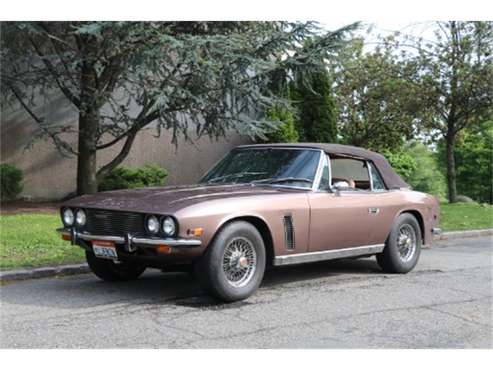 1974 JENSEN INTERCEPTOR III CONVERTIBLE Arguably the most glamorous and prestigious of all Interceptor variants, the Convertible represented the We... 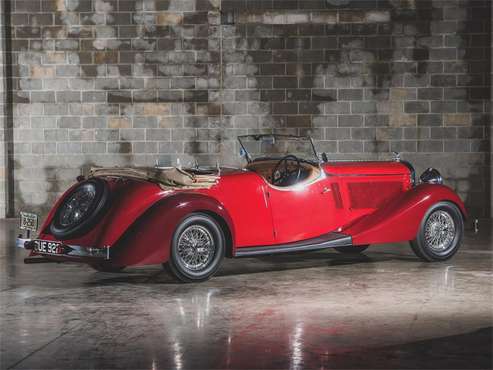 To Be OFFERED AT AUCTION WITHOUT RESERVE at RM Sothebys' The Guyton Collection event, 4 - 5 May 2019. Check back soon for complete catalogue descri... 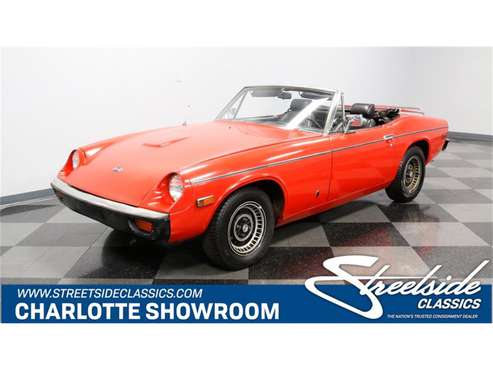 A budget-priced droptop with some of the most iconic names in British racing involved - that's what you get with this 1974 Jensen Healey. Both Jen...