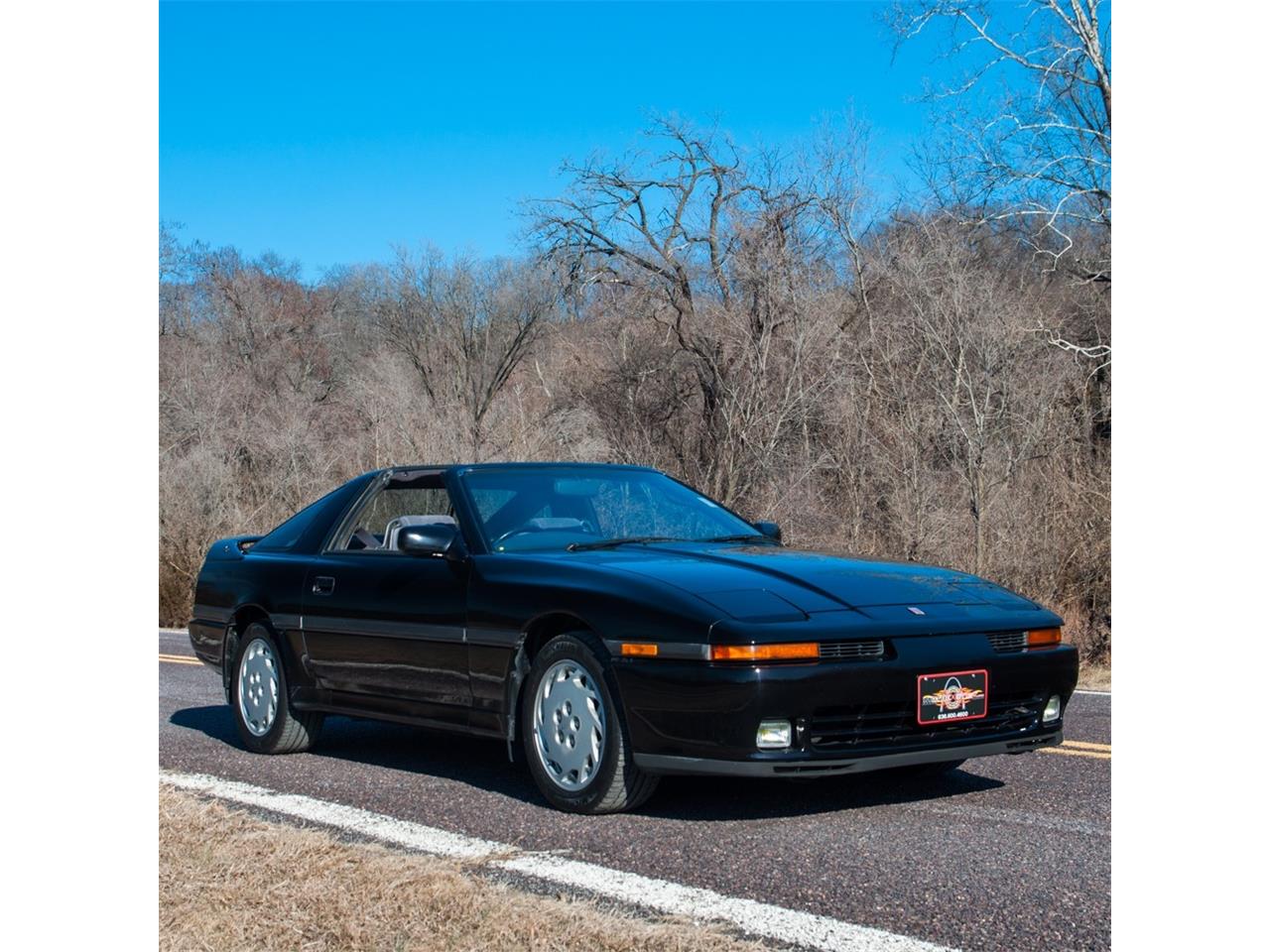 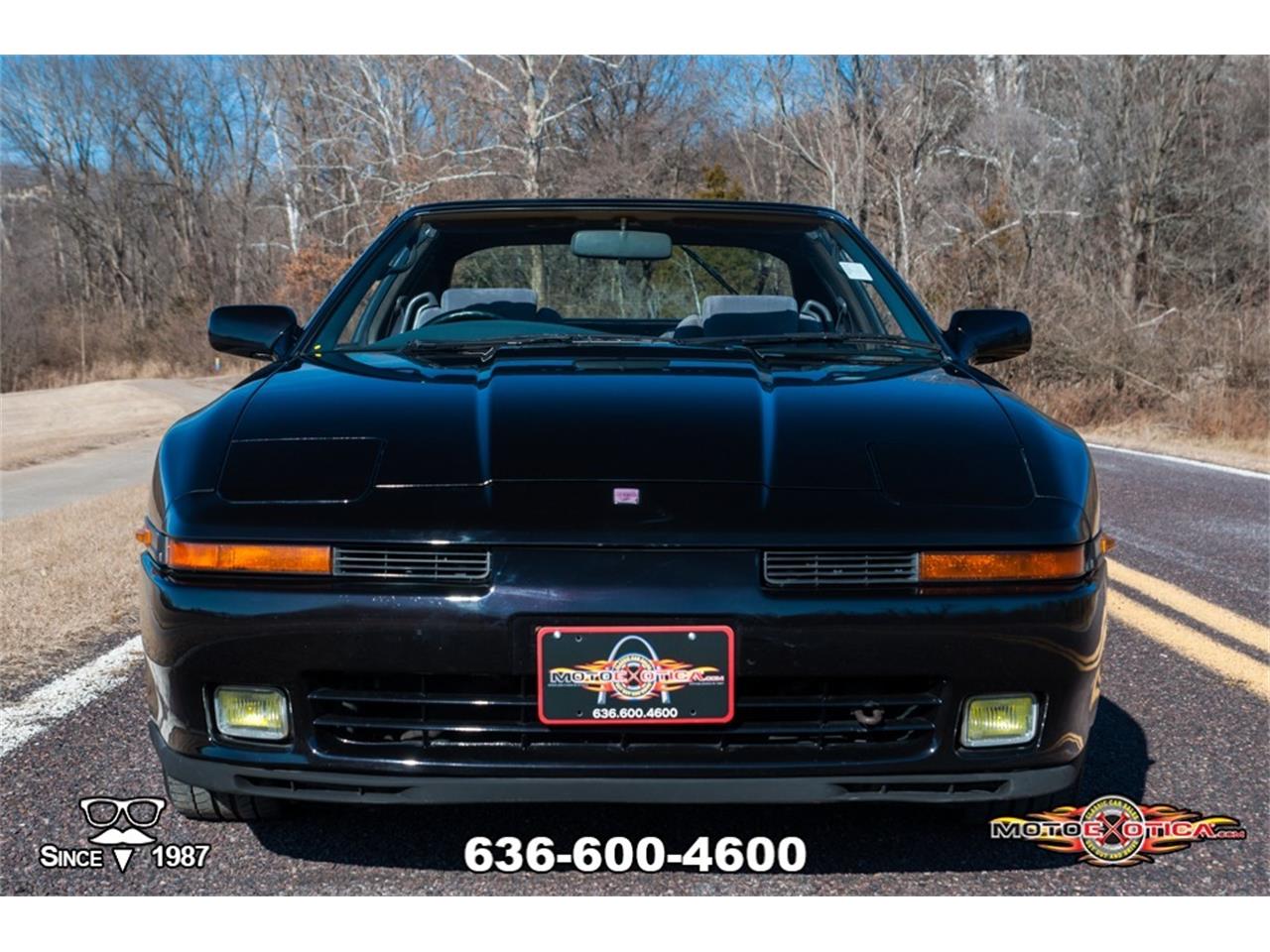 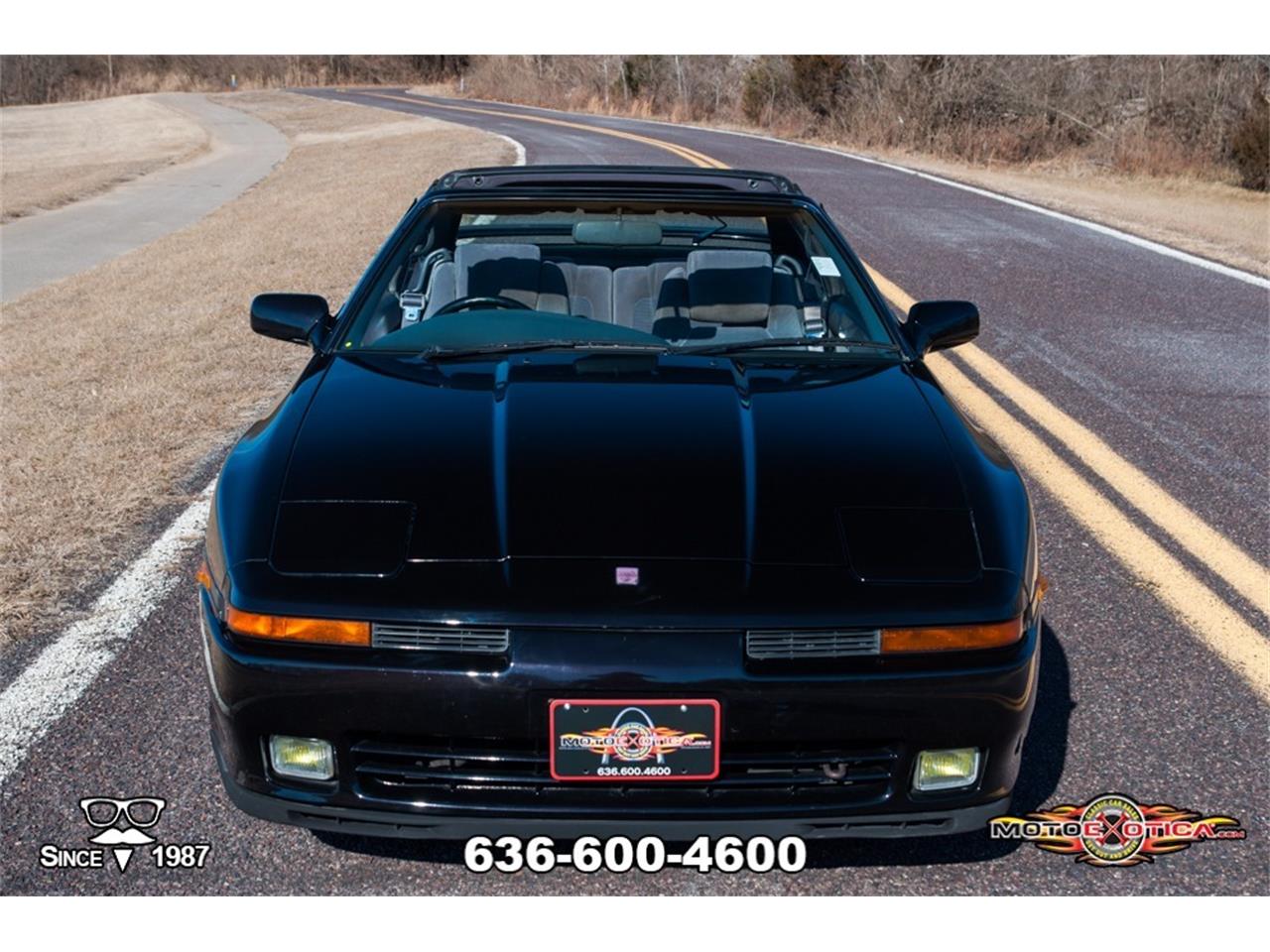 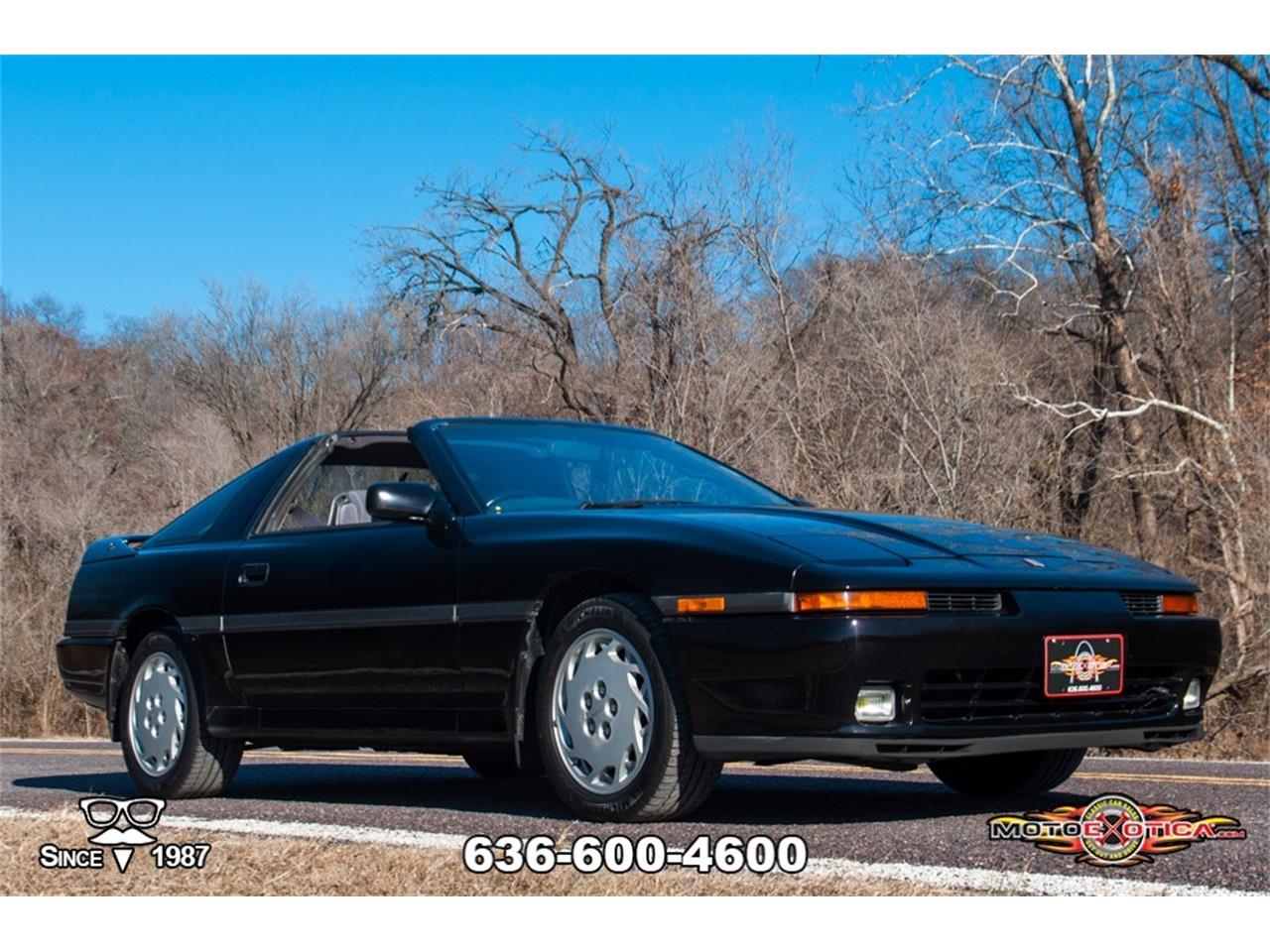 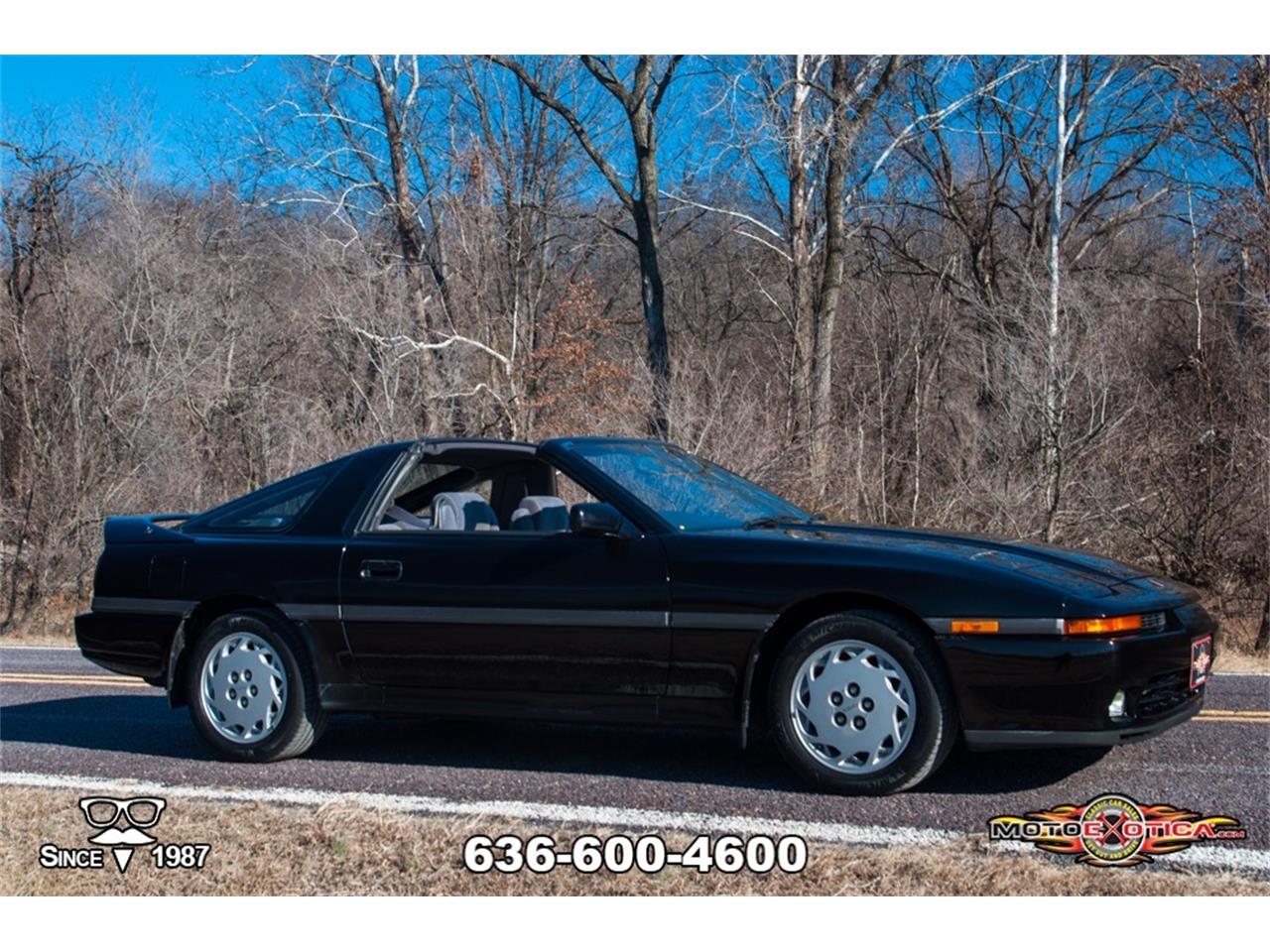 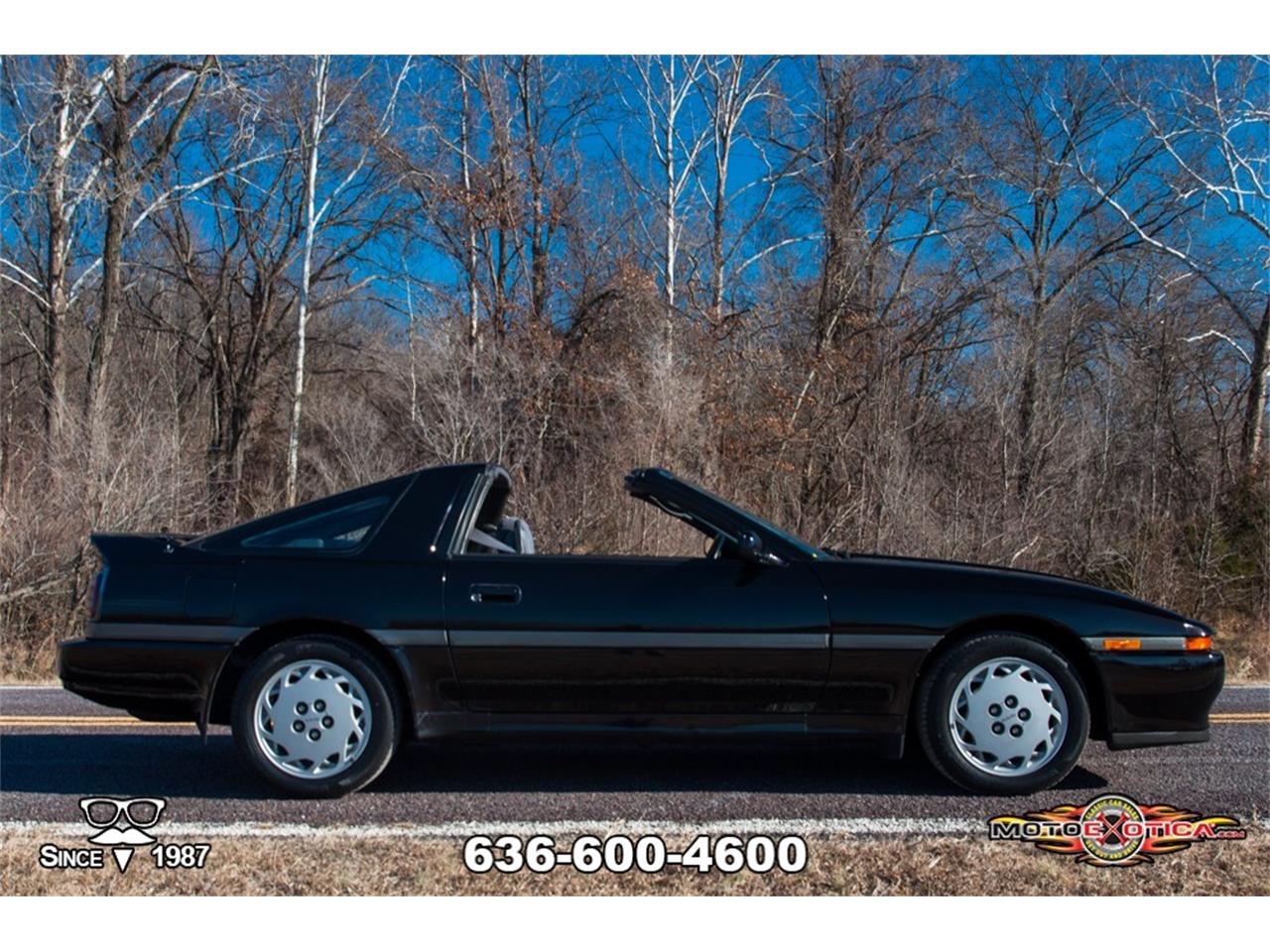 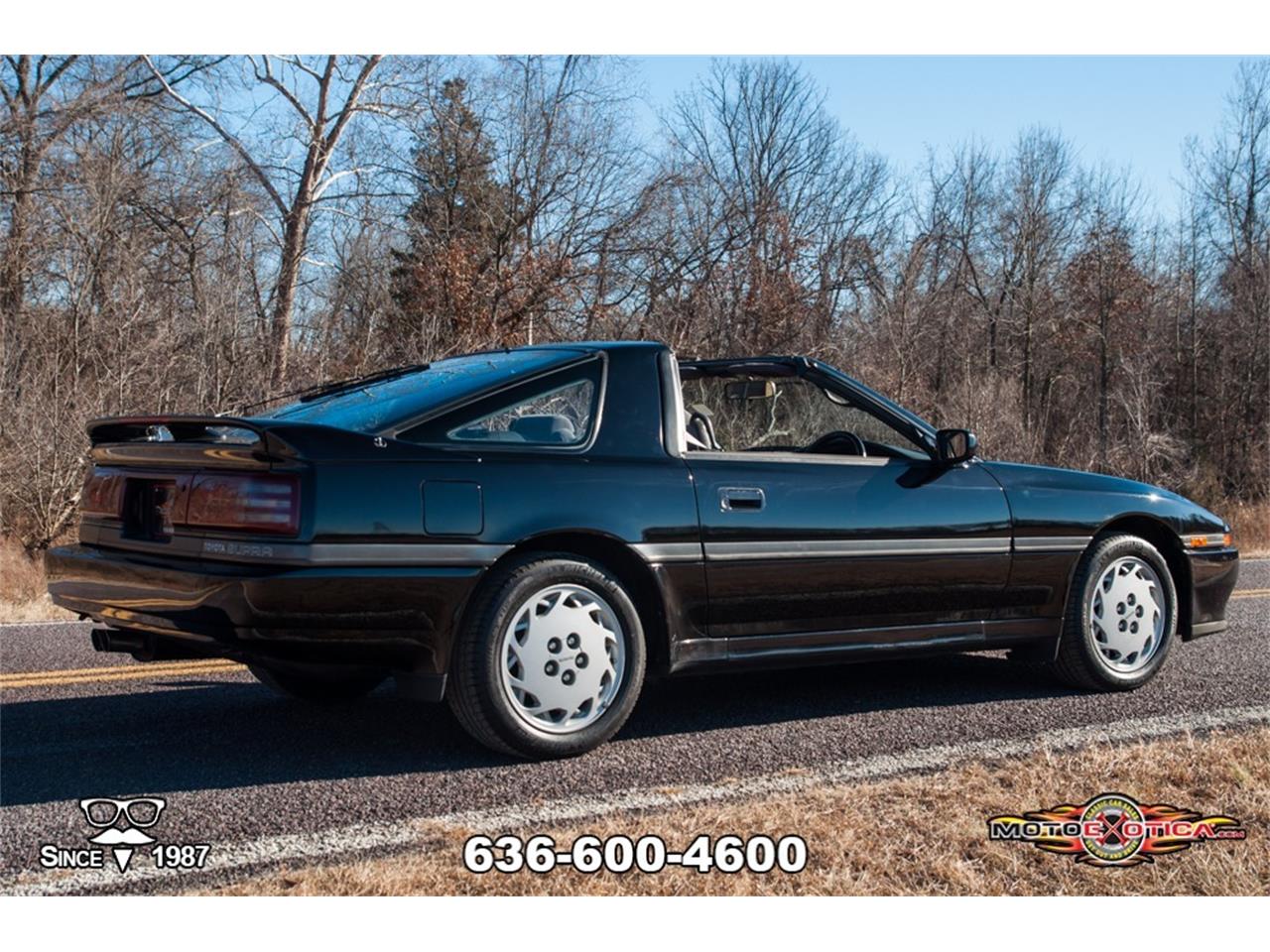 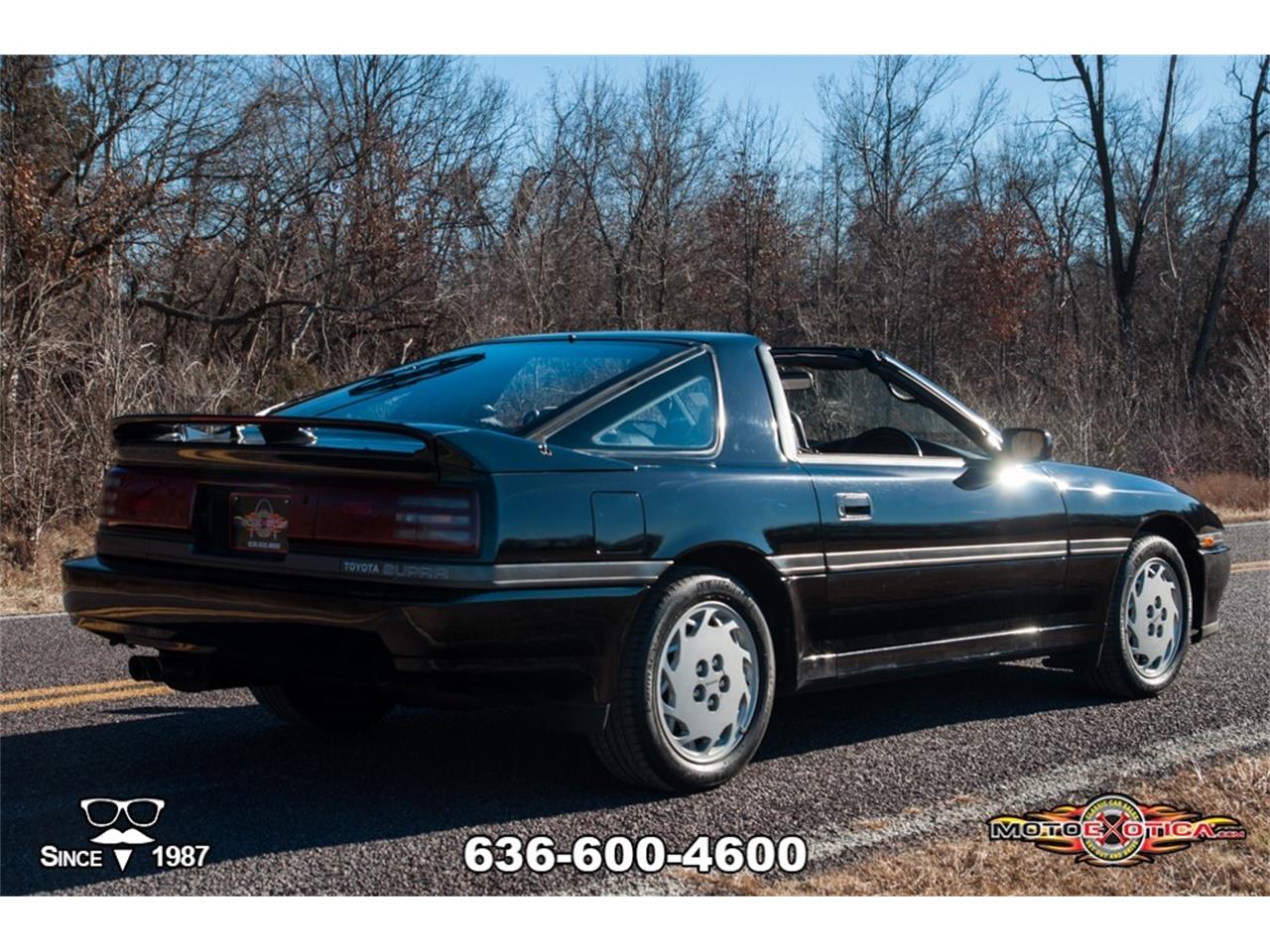 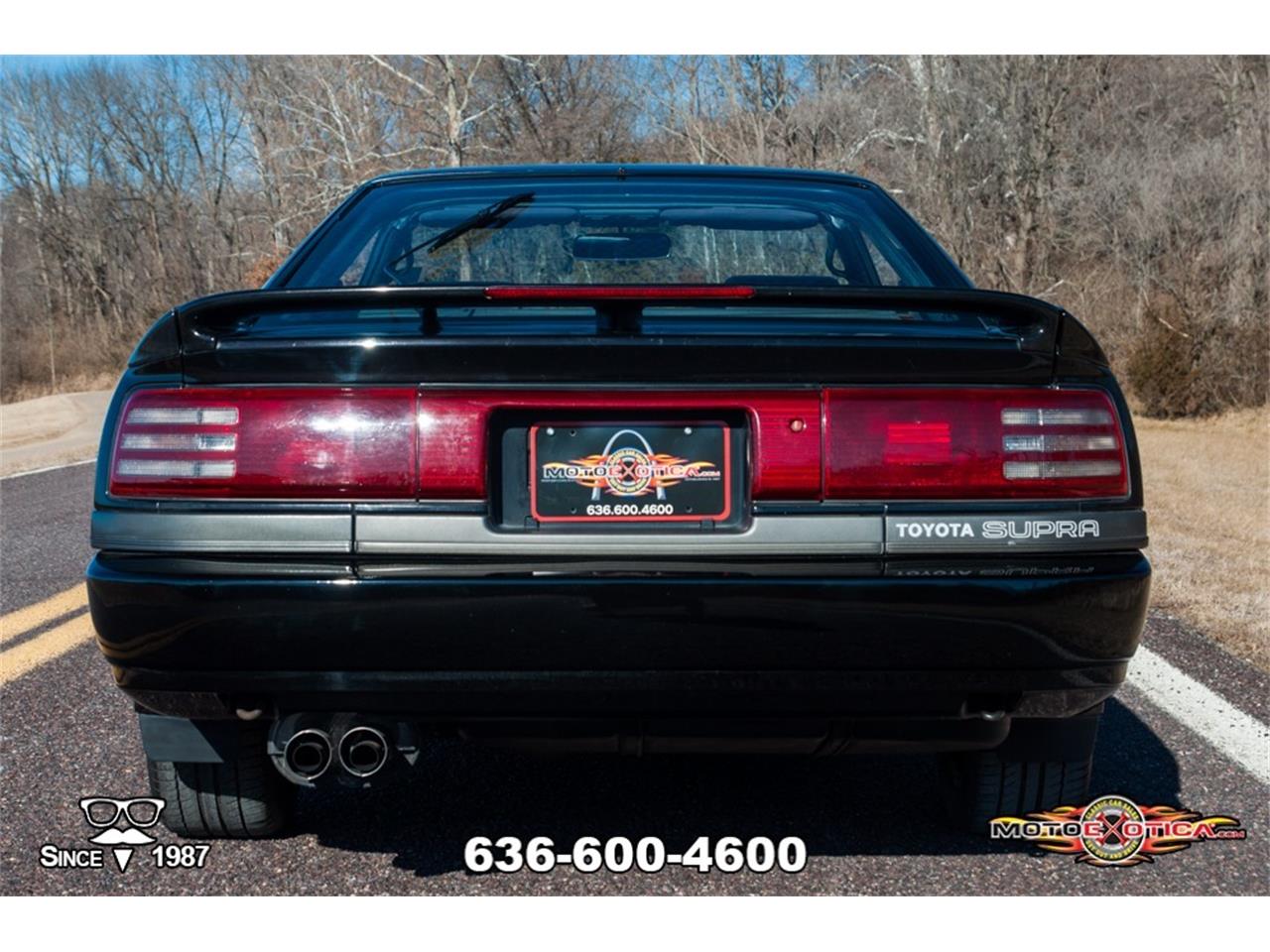 1990 Toyota Supra GT Extremely rare, US street legal right-hand-drive Japanese Market Supra 2.0L DOHC 24-valve twin-turbocharged inline six-cylinder engine (code 1G-GTE) Four-speed automatic transmission (code A340E) Ruby Black (code 206) exterior with gray interior (code FG12) Interior condition is excellent Removable targa top Air-conditioning, cruise control, power steering, power four-wheel disc brakes, power windows, power front seats and optional factory digital instrument cluster Equipped with Toyota Electronic Modulated Suspension Rear window defroster, wiper and spoiler Believed to be low mileage90,752 km or 56,391 miles Own this Vehicle from $199 per month-call 636-600-4600 Take this Toyota Supra to a cruise night or weekend show and you're guaranteed to be the only one there; guaranteed not to have the only Supra but the only right-hand-drive Japanese market model that is equipped with exclusive goodies such as the 1G-GTE twin turbo engine, optional digital dash and the Toyota Electronic Modulated Suspension. MotoeXotica Classic Cars is pleased to present this 1990 Twin Turbo Supra GT. Please note this car is street legal for use in the United States and this example was made in July 1990. Finished in Ruby Black (code 206), its paint and trim are in overall great condition, with some minor blemishes visible on the driver's side door edge, at the rear spoiler and on both rocker panels ahead of the rear wheels. The glass, which includes an electric rear window defroster and rear wiper, is in great shape, clear and crack-free. The car's lights, including its pair of pop-up headlamps are haze-free and look great. This Supra rolls on Michelin Primacy HP radials, size 225/50R16 at all four corners. The tires and wheels are in great overall condition. All models came with doublewishbone suspensionfront and rear. The car's bodywork is straight and solid, the engine bay is extremely tidy, the battery looks new, the cargo area looks very good overall but has a few minor blemishes visible on a closer look and the bumpers are in great condition. The cargo area has a full-sized spare tire. Under the hood is the Japanese market only 2.0L twin-turbocharged straight six-cylinder engine (code 1G-GTE). The new A70 Supra engine was the flagship engine of Toyota's arsenal. The24-valveDOHC1G-GTEadded two CT-12turbochargersto the versatile motor. There were 3 generations of this engine both air-to-air and air-to-waterintercoolerswere used, pushing output from 185 to 210hp (138 to 157kW) at 6200rpm and 173 to 203lb�ft (234 to 275Nm) at 3800rpm using the air-to-air over the air-to-water. This was the most powerful engine of the whole G family.. The turbo is buttoned to a four-speed automatic transmission (code A340E). Driver convenience features include air-conditioning, power steering, power four-wheel disc brakes, power windows, power front seats, cruise control and Toyota Electronic Modulated Suspension. Inside, the car has a gray cloth interior (code FG12). The power front buckets and small rear bench are in excellent shape, while the matching carpet and the headliner are in similar condition. The dashboard pad shows a blemish. One of the unique features of the Japanese model is the optional factory digital instrument panel, nicknamed "Tokyo by night" by some European engineers at that time. The three-spoke steering wheel is in great order. The inner door panels and center console are in very satisfactory condition, while the mirror glass and shift lever look good. Rounding out the interior is a factory AM/FM stereo with cassette deck. In May 1986, Toyota was ready to release its next version of the Supra. The bonds between the Celica and the Supra were cut; they were now two completely different models. The Celica changed to front-wheel drive, utilizing theToyota "T" platformassociated with theToyota Corona, while the Supra kept its rear-wheel-drive platform. The engine was updated to a more powerful 3.0L 200-horsepower inline six-cylinder. Although only available innaturally aspiratedtrim in 1986 1/2, a turbocharged version of the engine was introduced in the 1987 model year. The third-generation Supra represented a great deal of new technology. In 1986, options available for the Supra included three-channel anti-lock brakes andToyota Electronic Modulated Suspension (TEMS),which gave the driver two settings to affect the damper rates; a third was automatically activated at wide-open throttle, hard braking and high-speed maneuvering. The Acoustic Control Induction System (ACIS), a method of controlling air compression pulses inside the intake piping to increase power, was also a part of the engine's technological arsenal. This car is currently located at our facility in St. Louis, Missouri. Current mileage on the odometer shows 90,752 km or 56,391 miles. It is sold as is, where is, on a clean and clear, mileage exempt title. GET OUT AND DRIVE!!! Please Click Here To View Our YouTube Video! OR Copy &amp; Paste the Link Below to Watch the Video: www.youtube.com/watch?v=b1o8-66aLIw VIN: GA700045330 Note: Please see full terms and conditions listed below that pertain to the purchase of any said vehicle, thank you. 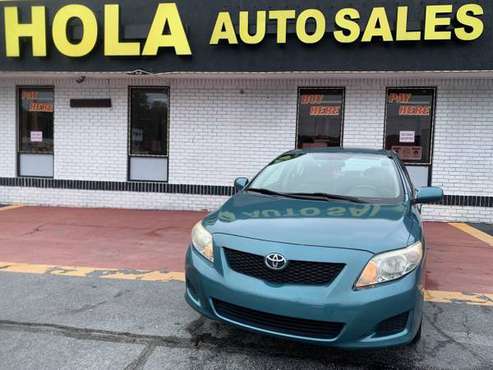 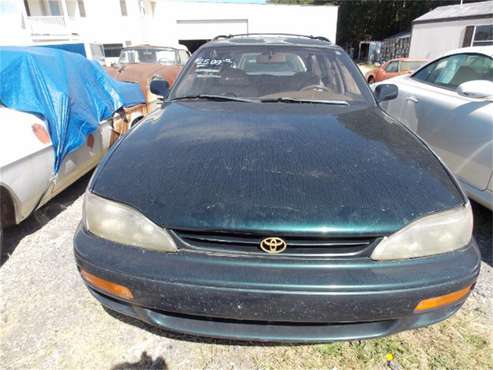 You are looking at a 1995 Toyota Camry LE wagon with a V6 automatic transmission 3rd-row seating and like new interior! You can own it for only $2500.00 which I feel is very fair for a car like this one with the potential that this vehicle has. I ... 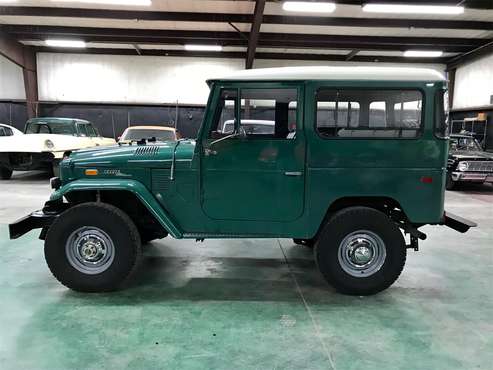 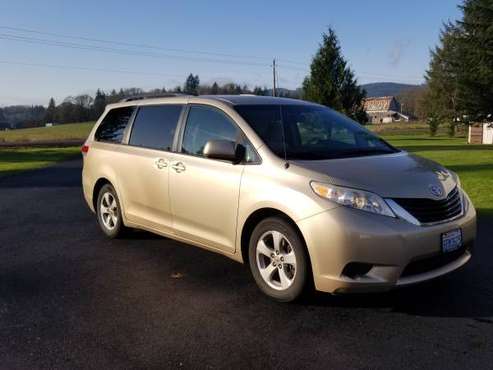 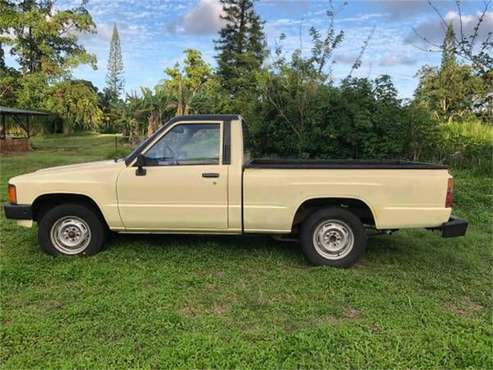 1985 Toyota Pickup Truck Drives great. 5 Speed Standard Transmission. Tires good. In August of 2009, at 213,000 miles, the engine was replaced. the replacement had 140,000miles. Please Note The Following **Vehicle Location is at our clients home a... 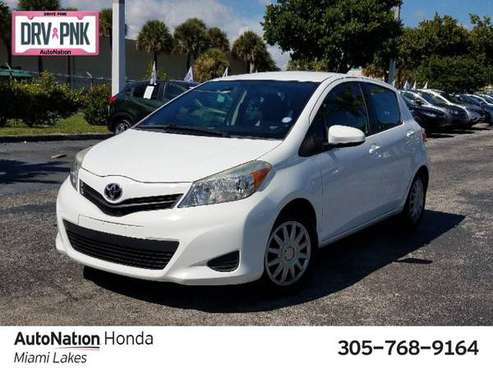 Use this link to see more information on this vehicle and to access a complimentary CARFAX vehicle history report: ➥ You can immediately confirm availability of this vehicle by calling 📱 (305) 768-9164 using this stock number: CD518239 ... 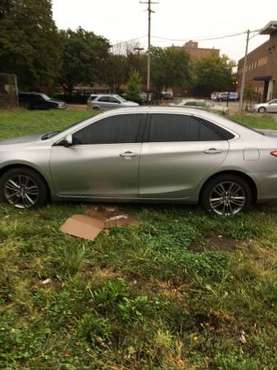 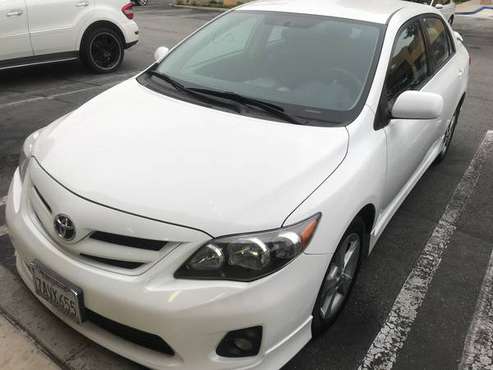